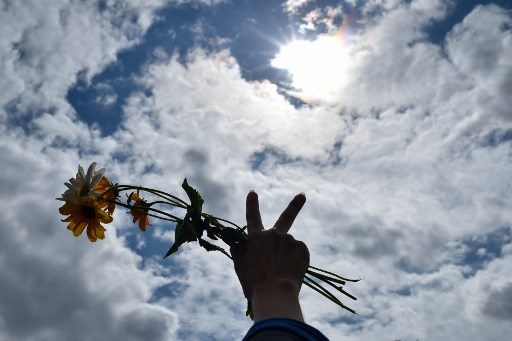 A woman holding flowers gestures as she protests against police violence during recent rallies of opposition supporters, who accuse strongman Alexander Lukashenko of falsifying the polls in the presidential election, in Minsk on August 13, 2020. (Photo by Sergei GAPON / AFP)

Facebook Twitter Copy URL
Copied
(UPDATED) Three decades after their People Power revolt against Ferdinand Marcos, Filipinos can take their cue from a familiar story unfolding in another part of the globe

A dictator ruling the country for more than two decades. Thousands staging protests for days. Flowers, flags, and even images of the Virgin Mary held by protesters in vigil. All these after a fraudulent election, where a middle-aged “woman, mother, and wife” – whose husband was the one supposed to run for president – is said to have been cheated.

It’s a familiar scene for Filipinos – but this is not their People Power revolt that ousted dictator Ferdinand Marcos in 1986.

This is the situation in Belarus, a landlocked country in eastern Europe that is now engulfed in its worst political crisis in decades. Tens of thousands of Belarusians, at one point pegged at around 100,000, have flooded the streets for more than 10 days now, to call for the ouster of dictator Alexander Lukashenko.

Lukashenko, 65, is accused of having stolen the country’s August 9 election from 37-year-old Svetlana Tikhanovskaya. If the results of the election were to be believed, Lukashenko won 80% of the votes while Tikhanovskaya won only 10%.

The European Union has rejected these election results, with German Chancellor Angela Merkel denouncing the electoral exercise as “neither free nor fair.” The United Kingdom and Canada have likewise called the election fraudulent, while the United States backed efforts to investigate the “electoral irregularities” in Belarus. Going against liberal democracies as usual, China and Russia on the other hand congratulated Lukashenko.

“Lukashenko has lost all legitimacy in the eyes of our nation and the world,” Tikhanovskaya said.

In the Philippines, the rising discontent against President Rodrigo Duterte has made the Belarus protests resonate more with Filipinos watching Belarusians. Online, it is not uncommon to see Filipinos commenting, “Sana all,” a millennial expression that roughly translates to “we hope we can have that, too.”

Exactly 34 years after mounting their own People Power revolt against Marcos, what can Filipinos learn from Belarus?

The Marcos of Belarus

Like Marcos, Lukashenko of Belarus is known for his iron-fisted rule. Having ruled Belarus since 1994, he is the longest-serving non-royal leader in Europe, and has been branded as “Europe’s last dictator.”

Lukashenko is now on his 6th term, and watchdogs say that all elections during his rule have been tainted.

In Belarus, Lukashenko is known for his blunt, folksy speech – much like Duterte, a longtime city mayor thrust into the presidency in 2016.

And as Duterte did at least in the first few months of the coronavirus pandemic, Lukashenko has downplayed COVID-19. While Duterte eventually took the pandemic more seriously, Lukashenko has dismissed it as a hoax and has refused to introduce a lockdown or postpone the country’s election.

He has also offered dubious tips on avoiding the virus, recommending driving tractors in the countryside, drinking vodka, and taking steam baths.

“There are no viruses here,” Lukashenko said as he gestured to a jam-packed arena in March, according to the New York Times. “Do you see any of them flying around? I don’t see them either.”

Lukashenko, who dismisses lockdowns as “frenzy and psychosis,” stressed that people with COVID-19 die due to underlying conditions. Lukashenko pointed out, for instance, that one victim in Belarus was fat, weighing 297 pounds. “How can you even live that way?” he said, as quoted, too, by the Times. “The virus attacks the weak.”

He is now labeled by critics as “cockroach,” as he is compared to the insect in a children’s poem.

The label came from popular blogger and pro-democracy activist Sergei Tikhanovsky, husband of Lukashenko’s 37-year-old challenger, Svetlana Tikhanovskaya. The 42-year-old blogger had driven around Belarus with a gigantic slipper tied to his vehicle’s roof, symbolizing his bid to “flatten” the Belarusian leader, reported the Voice of America. (The protests in Belarus have now therefore been dubbed the “Slipper Revolution.”)

The blogger posed a clear threat to Lukashenko, both because of his message and also his reach. His YouTube channel, for instance, had over a dozen more subscribers than the Belarus 24 satellite channel of the Belarusian government, according to the television and digital network Current Time.

In the eyes of Lukashenko, then, Tikhanovsky had to be silenced.

Much like the former Philippine senator Benigno “Ninoy” Aquino Jr, Tikhanovsky was jailed for criticizing the government. Unlike Aquino who was assassinated on August 21, 1983, however, the Belarus blogger is still alive. Tikhanovsky was the one initially touted to run for president – until he was jailed and barred from running, prompting his wife to challenge Lukashenko instead.

Tikhanovskaya rose to prominence in the same way that Corazon Aquino, wife of detained Senator Aquino, did in the Philippines. From political obscurity, Mrs Aquino ended up challenging Marcos 3 years after her husband – then the most viable candidate against the strongman – was assassinated. Like Tikhanovskaya, Mrs Aquino was derided by Marcos for being female and inexperienced.

“I did not want to be a politician. But fate decreed that I’d find myself on the frontline of a confrontation against arbitrary rule and injustice,” Tikhanovskaya said in a video from Lithuania. “I am ready to take responsibility and act as a national leader during this period.”

The Belarus protests and the Philippines’ People Power Revolution of 1986 are comparable in at least 3 ways, explained political science professor Alma Maria Salvador.

In an email to Rappler, Salvador cited the “existence of illiberal structures” among the similarities between the Philippines under Marcos and Belarus under Lukashenko.

She explained that in the Philippines, the country’s economy deteriorated after the Aquino assassination, while the 1986 snap elections called by Marcos were fraudulent.

In Belarus, there has been an economic decline due to worsening ties with Russia, inefficient economic centralism, and Lukashenko’s bungling of the COVID-19 crisis. On top of this, Belarus has suffered “more than two decades of rigged elections and harassment of the opposition.” These factors have solidified the opposition in Belarus, she said.

Salvador, however, said that Belarus “has yet to succeed with democratic transition.” This is unlike the Philippines where at least 4 factors “were crucial” to “successful democratic transition” – the role of the middle class in the 1986 revolt, economic dissatisfaction of the middle class, the military’s loss of confidence in Marcos, and America’s strategic interest in a democratic Philippines at the end of the Cold War.

When asked what Belarus can learn from the Philippines’ People Power experience, Salvador said that “there should be sustained protest for either Russia and/or US/NATO to take notice.”

Salvador said the quality of the democratic social movement is also an important factor. “These forces must be sustained because People Power revolutions as we know them do not sustain democratic gains as evidenced by the continuity of oligarchic politics in the Philippines from Cory Aquino in 1986 to PNoy Aquino III in 2010-2016,” she said.

What can the Philippines, in turn, learn from Belarus? Salvador said she is unsure if Belarus “will be the model for our own path on democratization,” but added that the Philippines can learn from its own experiences.

“Given our own history of democratic movement and community organizing, what we can do to respond to populism is to parallel these efforts, and resurrect and strengthen parliamentary opposition,” Salvador said.

She continued: “The decline of the legislative opposition under Duterte should be supported by political party reform and party consolidation. The symbolic and real role as opposition of Leni Robredo was a missed opportunity somehow. Her independence from the Liberal Party could have been an advantage but her reluctance to lead the opposition was not helping.”

‘They should not give up’

Arjan Aguirre, who teaches social movements at Ateneo de Manila University, also said in an interview the Belarus protests and the People Power revolt in the Philippines are similar and different at the same time.

Aguirre said these two events both involve political crises, with people standing firm against governments trying to stay in power. The personalities involved in both events also have things in common, such as the way Marcos and Lukashenko have held onto power for more than two decades.

The difference, he said, is that Belarus has a strong background of a former communist state. Based on its power structure, Belarus has a “very strong state” that controls the economy, unlike the Philippines under Marcos that had independent elites supplying the needs of the social movements.

“The very crucial factor that I would like to see in Belarus is, of course, the participation or the emergence of the elites. If they have elites, that would change the situation,” said Aguirre, who spoke to Rappler from the UK, where he is taking up a second master’s degree at the London School of Economics and Political Science.

Still, Aguirre said the similarities outweigh the differences when comparing the Belarus protests and the People Power revolt.

“In all crises that we have witnessed so far, the participation of the ordinary people usually gives meaning to the situation,” he said. “If the people are there, it gives meaning to this mobilization because it sends this message that this is something that also affects you, all of us.”

While the elites provide the resources, he added, the common people provide “the meaningful side of the mobilization.”

When asked what the two countries can learn from each other, Aguirre said Belarus can learn resilience from the Philippines. He noted how Filipinos tried to get rid of the Marcos dictatorship in the 1970s, and right after the death of Aquino in 1983, but failed in both instances. A potent mix of ingredients on February 25, 1986, however, eventually led to the toppling of the Marcos regime.

“The idea there is that they should not give up. They should continue to challenge, to engage, the authoritarian regime of Lukashenko,” he said.

What the Philippines can learn

He said the Philippines, on the other hand, can learn innovation from Belarus. He noted the images and objects the Belarusians used in their protests, and also their use of underground media as Filipino journalists wrote for the so-called mosquito press in the 1980s.

A report by Radio Free Europe/Radio Liberty showed how Belarusians used Telegram, for instance, to skirt the internet lockdown during their country’s elections.

Aguirre added that the challenge for Filipino opposition groups is to provide alternative issues to push, and not only to react to issues advanced by the government. He cited how the government pushed for the death penalty when people protested the hero’s burial for Marcos, and how the government revived the anti-terror bill as a response to criticism over COVID-19.

But Aguirre sees signs of hope. He cites the group of leading health workers who recently issued a statement criticizing the Duterte government’s coronavirus response. The doctors prompted Duterte to again put Mega Manila under a semi-lockdown – though grudgingly, as he practically accused them of plotting a revolution.

Aguirre said that “even the organized opposition groups were surprised by that move” by health workers. “To me that’s an example of being creative in a political situation,” he said, adding that this is an example of a social movement. “They mobilized the people, spontaneously, by coming up with a statement, and the government was forced to respond.”

Thirty years after People Power, the Philippines finds itself facing a new dictator – while watching its old story unfold in another part of the globe.

For Filipinos, watching Belarus is like watching oneself in the mirror. But tired and disillusioned, are they still the people they used to know? – with reports from Simon Levien and Agence France-Presse/Rappler.com