Philippines plans to build its way out of pandemic 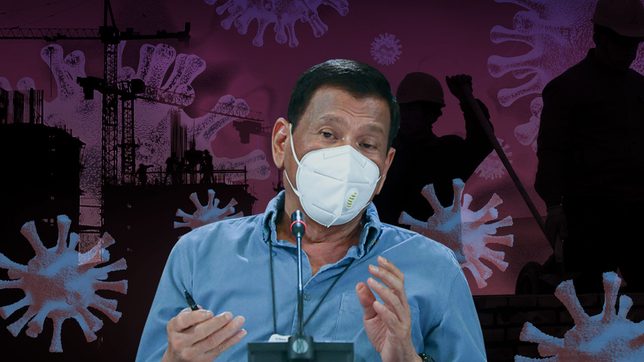 With the pandemic sending the world into recession, the Philippines is planning to claw its way back up by literally building bridges and roads.

Lawmakers, Cabinet members, and most economists agree that infrastructure is able to create a multiplier effect in the economy, which means that besides the structure itself, a ripple effect of market activity in the community where it is built is sparked.

But while plans and numbers look good on paper, realities on the ground paint a more complex picture.

While the Duterte Administration was able to ramp up infrastructure spending relative to the size of the economy, the ambitious big ticket projects were hounded by delays and controversies.

Infrastructure projects also involve lots of paperwork, ranging from feasibility and economic impact studies, right-of-way issues, and permits. All these need to be hurdled before even picking up a shovel.

Moreover, infrastructure projects have been historically plagued with corruption. Budget allocations for projects in provinces have also been used by various administrations to galvanize a political base.

This issue is particularly important to look into, especially as the next presidential election is expected to shake up the political and economic spheres.

Finally, the pandemic remains a health issue. Proposals, so far, have prioritized spending on infrastructure to resuscitate the economy.

The House of Representatives has proposed a massive P1.3-trillion package to address the impact of the coronavirus pandemic.

The proposal covers wage subsidies, loans for businesses, and infrastructure.

House Bill No. 6815, or the Accelerated Recovery and Investments Stimulus for the Economy of the Philippines (ARISE Philippines), aims to pour P650 billion for infrastructure projects for 3 years.

(The BBB program is already good, let’s not complicate it, let’s just remove the obstacles for projects that are already lined up… we aleady debated over those projects, there’s already authorization to spend, so why not give it a go?)

Quimbo added that proposals under ARISE Philippines were a result of consultations with various industries.

She added that aside from the multiplier effect, infrastructure projects help sectors cope with the pandemic.

For instance, Quimbo argued that improving infrastructure for internet connectivity will help schools adapt to the new normal.

“We will prioritize infrastructure to improve our resilience, build schools of the future. Imagine, only 25% of our public schools have internet, and we’re not even talking about households. If we want to go online while we wait for a vaccine, we need to boost infrastructure,” Quimbo said.

While the bill itself does not give a detailed breakdown of projects and the amount to be spent for each, it gave the following general descriptions of what the P650 billion will build:

“In infrastructure, you’re taking care of short-term needs, like employment and job creation. At the same time you’re building capacity for medium term,” Mapa said in a virtual press briefing.

However, the Senate counterpart proposes a much smaller amount for economic recovery.

Senate Bill no. 1564 or the Bayanihan 2 bill initially proposed to spend P236 billion, but was slashed to P140 billion after deliberations.

This means that the House and Senate proposals have a discrepancy of P1.16 trillion. Both chambers would have to agree first on the amount needed.

Duterte’s economic managers have already said that the House version was “not fundable.”

Medical experts have emphasized that investing in mass testing is key to beating the virus. As of July 23, the Philippines has been able to test less than 1.2 million individuals or just 0.9% of the population. Testing capacity hovers around 18,000 to 21,000 per day, far from the target of 30,000.

The Philippine healthcare infrastructure was never prepared for a pandemic.

According to a paper from the Philippine Institute for Development Studies, citing government data, there are only around 61,500 hospital and intensive care unit (ICU) beds, 2,000 ventilators, and 52,000 doctors in the Philippines.

On a best case scenario, or where the government is able to isolate 70% of infectious individuals, the Philippines would still need 15 times more ventilators, almost 4 times more hospital and ICU beds, and almost twice the number of doctors the country currently has. (READ: Hospitals in the Philippines: Where they are and aren’t)

Despite imposing one of the hardest lockdowns in the world, the Philippines is still unable to flatten the infection curve.

This has led to think tanks like IBON Foundation slamming the government’s current plans to push through with infrastructure projects and borrow from multilateral lenders.

In a Rappler Talk interview, IBON Foundation executive director Sonny Africa noted that some infrastructure projects, particularly those geared toward improving tourism, may no longer be feasible.

Critics of infrastructure spending like IBON Foundation have slammed the government loans.

While at first glance, loans from the Asian Development Bank – currently the biggest lender – are for social safety nets, there are also borrowings that are directly for infrastructure.

An upcoming $130 million for the EDSA Greenways project is close to being approved.

Moreover, China’s Asian Infrastructure and Investment Bank or AIIB, which is lending the country $750 million through a co-financing scheme with the ADB, does not have development financing.

“It recently launched a COVID recovery facility but even this is oriented towards addressing liquidity problems, providing fiscal and budgetary support in partnership with multilateral banks, and building health infrastructure – all so that governments can focus on COVID impacts and leave infrastructure funds alone,” IBON Foundation said.

The Philippines also signed a deal with France worth €250 million or around P14 billion. Of the amount, €150 million or P8.4 billion would be used for infrastructure financing.

“COVID-19 is unplanned, while the Duterte administration’s focus is unchanged. The government is still fixated on burnishing the economy’s image to attract foreign investors, and will only address the emergency by as much as it can borrow. This reinforces the country’s vicious spiral of debt and shallow economic growth. Creditors are complicit in this neoliberal COVID response,” it added.

Duterte spent more on infrastructure than his predecessors.

While Duterte was able to successfully increase infrastructure projects, he was only able to do so for small projects.

His flagship infrastructure projects worth a whopping P8.4 trillion have already been revised, with some projects found to be not feasible or just too expensive.

For instance, former socioeconomic planning secretary Ernesto Pernia said that the bridges linking Luzon, Visayas, and Mindanao, are just too pricey and face engineering concerns due to the depth of the seas.

“Usually human nature, we tend to, in general, tend to be ambitious at the start, then [have] a long list of undertakings to be carried out,” said Pernia in a Rappler Talk interview in October 2019. Pernia resigned last April in the middle of the pandemic due to “differences” in philosophy with other Cabinet officials.

The economic team would later revise the list, now with 100 projects from 75, without even giving the updated list to the media.

Flagship infrastructure adviser Vince Dizon defended this, adding that it was an “evolving list.”

The budget is a political tool, and infrastructure projects are always in the spotlight especially when elections near.

Legislators under the Duterte administration had already shown in 2019 how budget deliberations can get messy, leading to a budget impasse which hurt the economy.

The 2019 national budget was controversial due to allegations of pork barrel insertions worth P95.37 billion, which were eventually vetoed by the President.

More than half of the vetoed projects fell under the local roads program which amounted to P40.27 billion.

With Duterte’s track record, the Philippines’ political patronage system, and inequality aggravated by the pandemic, will the infrastructure push succeed? And will it adequately address the health crisis? – Rappler.com