Slain Pagkakaisa ng Manggagawa sa Timog Katagalugan (PAMANTIK-KMU) vice chairperson Dandy Miguel was always one of the first people to stand up for, and be in solidarity with, workers facing labor issues in the region.

His courage was admired not just by workers, but also the human rights community. “Pang Dandy,” as he was called by his colleagues, radiated a strong sense of determination and grit that inspired many – from his union members to even the youth sector.

But in the aftermath of the March 7 police crackdown which saw 9 activists killed in Calabarzon, many of whom were his colleagues, Miguel admitted to Rappler that he felt scared and nervous.

Asked why he continues despite the danger, Miguel said that turning one’s back to the labor rights movement and those who need help the most is counterproductive. It wasn’t his fight alone, after all.

(This is not just for me, but also for my fellow workers, future children, and grandchildren.)

On March 28, exactly 3 weeks since “Bloody Sunday,” 35-year-old Miguel was gunned down while riding his motorcycle in Calamba, Laguna.

He carried the fight for fair labor up to the very end of his short life.

Gunshot wounds and blood were unable to conceal what was printed on the red shirt worn by Miguel that night: “Sahod, trabaho, karapatan, ipaglaban” (Fight for salary, jobs, and rights)

Miguel was born to a family of workers. He was raised in Valenzuela City, attending Malinte Elementary School and Valenzuela National High School.

In 2006, Miguel started working for Fuji Electric Philippines in Laguna. He went on to become the president of the factory’s independent union in 2017, leading 400 workers.

At the time of his death, Miguel was vice chairperson of PAMANTIK-KMU, a labor rights center in Calabarzon. The group marked its 37th year anniversary on Monday, March 29.

Miguel’s work included documenting labor rights violations in the region known for its various industrial zones. He was one of the strong voices calling for minimum wage increase and an end to contractualization.

Because of the nature of their work, PAMANTIK-KMU became a frequent subject of constant red-tagging and villification both online and on the ground.

In fact, Miguel is the 3rd PAMANTIK-KMU officer to get killed, following the killing of then-president Diosdado Fortuna in September 2005 and Rey Malaborbor in 2019.

Miguel assisted workers who were laid off at the height of the strict lockdown because of the coronavirus pandemic. He also led negotiations with Fuji Electric management to implement health and safety measures for employees.

He was reelected union leader in 2020. Before the year ended, Miguel successfully renegotiated a collective bargaining agreement which increased the minimum wage for the workers – an increase of P40 in 2020 and 2021, and P50 in 2022.

All of these were signs that Miguel valued and embraced as a union leader, Mia Antonio of LIGA-Southern Tagalog said. He was invested in the causes of the labor sector and was always on the frontlines during protests on the streets and negotiations with companies, she recalled.

(Dandy is the type of person who knows exactly what kind of help you need. Even if he has a problem, because he’s human after all, he will still place the welfare of others above his own, like a true leader.)

Antonio had known Miguel for years and he helped her navigate the movement that can be tiring and frustrating at times.

He was the voice of reason for many activists. Soft-spoken but firm when needed, Antonio said it was easy to be engrossed whenever Miguel spoke during mobilizations or even engaged in simple conversations.

(I talk to him about my problems, but he often tells me to just breathe, because the country still needs us.)

KMU chairperson Elmer Labog, meanwhile, said Miguel always went over and above his responsibilities to address the issues hounding communities.

He recently helped farmers in Hacienda Yulo in Laguna.

(He doesn’t limit himself to helping workers. He also looks for solutions to problems of different sectors in the region.) 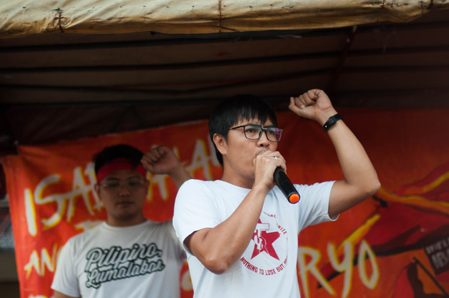 In the aftermath of the Bloody Sunday incident, he tirelessly helped file complaints with the Commission on Human Rights (CHR) regarding harassment and surveillance of unionists.

On March 28, Miguel became the latest activist slain under President Rodrigo Duterte. As of March 7, CHR data showed that 130 activists have been killed across the Philippines under the present administration.

Human rights and progressive groups, both local and international, have called out the culture of violence in the Philippines under Duterte.

(The government will prioritize silencing workers before giving them better living wages and respecting their rights.)

How many more of the country’s citizens will end up dead fighting for what they believe is right? – Rappler.com