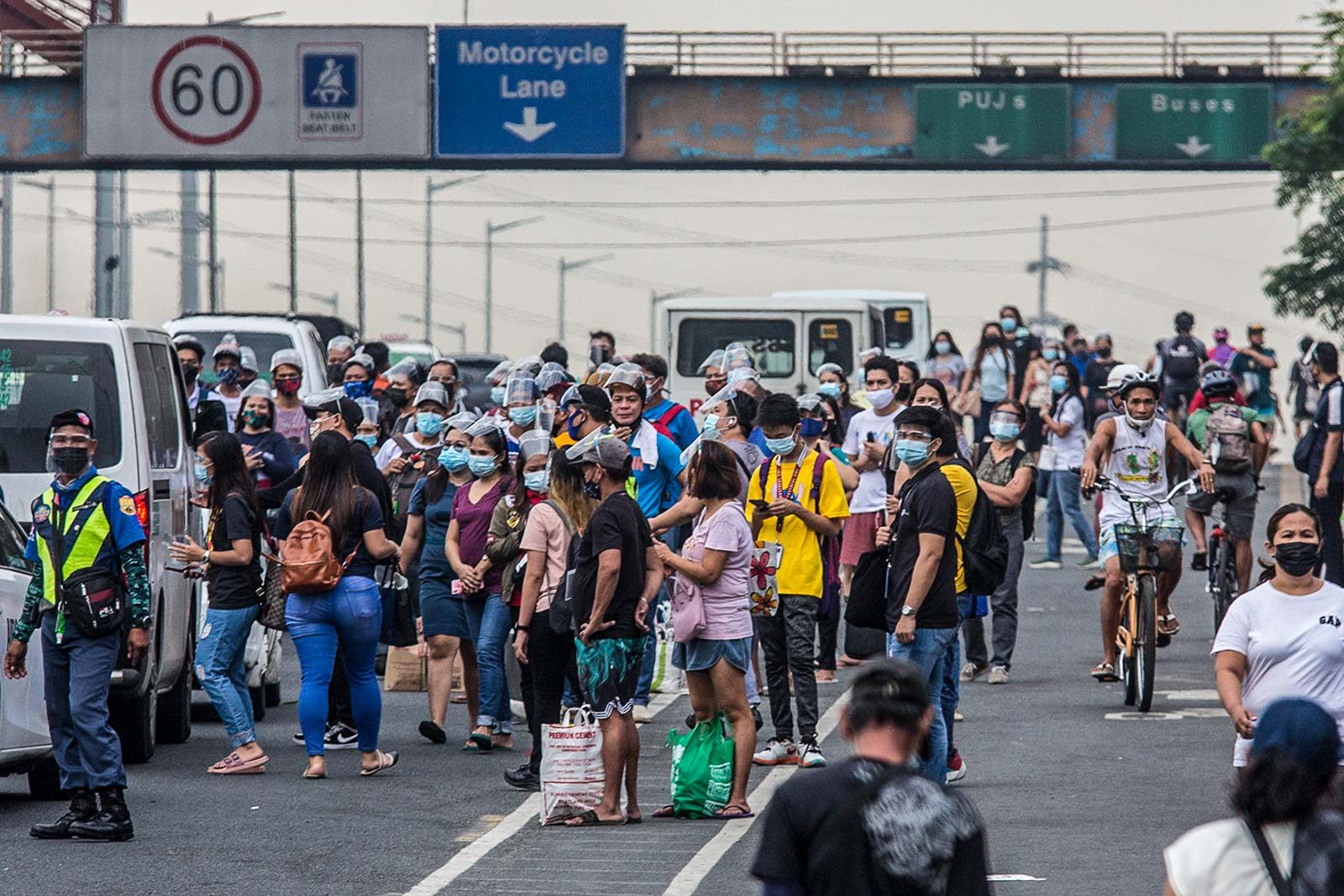 PANDEMIC. A long queue of passengers stranded are seen along Commonwealth Ave. and Philcoa in Quezon City on Wednesday, April 14, 2021 due to lack of public transportation because of the community lockdown.

That’s one of the most frequent complaints heard from Filipinos, particularly those who live in the dense metros. And every election, candidates swear they will solve traffic congestion, more often than not placing emphasis on building more roads (highways, skyways, bypasses, and the like) to give cars and motor vehicles more space to move.

This philosophy very much shows in the national budgets – put into law by Congress with sign off from the President – with a whopping total of P2.8 trillion allocated to road-based infrastructure from 2010 to 2021, over 90% of which was allocated to the Department of Public Works and Highways (DPWH).

The budget from 2017 to 2021 alone was P1.9 trillion – almost 70% of the total from the past 12 years – highlighting the “Build, Build, Build” infrastructure drive that has come to be synonymous with the Duterte administration.

On the flip side, the allocations for road-based public transport have been much smaller. Then again, the Philippinen transportation sector has long been marked by infrastructure investments that prioritize the movement of private vehicles. Supporting the needs of commuters with safe and efficient public transport services is far too often left by the wayside.

For this analysis, we focus on budgets from 2019 to 2021 (and 2022 later on as we try to see how investments have been allocated for this year).

As seen from Table 1, most of the budgets for transportation (north of 91%) have really gone into rail-based transport. One may argue that this is understandable from the perspective that rail is more capital-intensive, but two things:

Both of these points imply that not only is there an imbalance in the allocations within the transportation agency between road and rail investments for passenger transport, but there is a much greater problem with how little investment is being made in road-based public transport that should have gone hand in hand with the investment in roads.

Let’s dig in a bit more into the budget for road-based public transport. What specifically were they for? How had they been spent? How have planned programs been implemented? Here’s how the P12.4 billion allocated from 2019-2021 got distributed:

Each driver was suppose to receive a one-time subsidy of P6,500, hardly enough compensation for prolonged public transport shutdown during the pandemic; this is the equivalent of just 12 days’ worth of minimum wage pay.

According to the annual audit report of the Commission on Audit (COA) for the Department of Transportation (DOTr), only P839.5 million (72%) had been disbursed as of December 31, 2020 (note that the Bayanihan 2 bill had been passed in September and transport shut down since March that year). A post on the Facebook page of the Land Transport Franchising and Regulatory Board (LTFRB), which was responsible for disbursing the subsidies, reported that P1.025 billion had been disbursed by June 29, 2021.

It is unclear what the DOTr’s PUVMP budget allocation is meant to cover, since there are no details on it provided in the General Appropriations Act (GAA). The program, however, was meant to facilitate a shift in the country’s PUV supply to more fuel-efficient and climate-friendly vehicles.

Jeepneys originally had a deadline of June 2020 to consolidate into cooperatives (the first step of the phase-out), yet implementation has been very much delayed. According to COA, that delayed implementation had resulted in P169.24 million of reverted funds allocated to PUVMP in 2019, which still had not been resolved as of the 2020 audit.

Further, the program’s current terms are not particularly favorable to jeepney drivers. They are required to purchase “modern jeepneys,” which are estimated to require an initial investment of P1.6 million to P2 million per unit, with just P160,000 given by the government as equity subsidies and the rest for the account of the drivers/operators through debt or equity.

In reality, too, the structure proposed for the program is not as straightforward as this; drivers are meant to consolidate into cooperatives that would theoretically be able to provide additional support, but ultimately this is the cost on each driver. And if we take LTFRB’s likely understated estimate of 120,000 PUJs (COA, 2020), providing each vehicle with a P160,000 subsidy would actually mean a budget of P19.2 billion.

In any case, for drivers with monthly incomes in the P10,000 to P16,000 range, this is a massive ask. Transport workers recognize the need for the shift, but as National Confederation of Transport Workers’ Unions president Ernie Cruz told CNN Philippines, “No to jeepney phaseout kami, without just transition.”

The Service Contracting program was meant to shift the road-based transport industry from a boundary system – where each driver pays a daily “boundary” fee to ply a route, therefore putting the pressure on the driver to transport enough passengers to recover that cost and have enough for take-home pay – to a service-based payment system, wherein PUV drivers would be paid a fixed fee based on distance run (rather than passengers carried) to provide reliable service on commuter routes. Implementation of the program, headed by LTFRB, has been rather flawed from the start, however.

Onboarding of drivers to the program was slow-paced, funding intermingled with the “libreng sakay” program for healthcare workers (which had not been the intent of the service-contracting program), and the funds would have been insufficient for the rollout initially planned at a national scale.

In its 2020 audit, COA reported that of the P5.58 billion allocated from Bayanihan 2, only P8.8 million pesos (0.16%) had been disbursed by December 31, 2020. Subsequent statements to media by LTFRB Chair Martin Delgra brought the total disbursement number up to P4.7 billion by October 23, 2021, sourced from both Bayanihan 2 and the 2021 GAA – still far from ideal, as a bulk of the payments had gone toward initial onboarding payments for drivers, as opposed to payments for their service operations.

Another program that first popped up in Bayanihan 2 is funding for active transport, an important sector for mobility that had been long neglected. As of July 28, 2021, the DOTr announced the completion of 497 kilometers of “pavement markings, physical separators, and road signages” in Metro Manila (P801.8 million), Metro Cebu (P150 million), and Metro Davao (P145.4 million).

Local government units have also built their own bike lanes beyond these three Metros, among them Naga City in Camarines Sur, Gingoog in Misamis Oriental, and Baguio and Iloilo Cities, all of which have been recognized as the most bike-friendly cities in the Philippines (Mobility Awards).

Other observations from the COA audit report bring the issue of inclusivity and equity in Philippine transport to light:

This leads us to the next question: what do the budgets look like for 2022?

Table 2 shows that the balance between road and rail- based transport budgets have improved (37% road, 63% rail), although this is also a factor of the rail budget having gone down significantly (halved from 2021).

That said, no procurement plans has been presented by DOTr as of yet for the road-based budget allocations. But it is good to note that allocations for bike lanes and service contracting have continued to find their way into the national budget, a shift that must be sustained as efforts to reform the transport sector continue.

The big fly in the oil can these days, though, is the P2.5 billion allocation for “Fuel Subsidy to Transport Sector Affected by Rising Fuel Prices.” Recall that the 2022 GAA was passed in December 2021, prior to the oil crisis currently raging. PUV drivers and operators have been forced into “voluntary” grounding as fuel prices rise far beyond what the fare prices can support–currently at a minimum of P9, set when diesel was P38/liter as opposed to P75/liter now (CNN). Worse, election laws prohibit the disbursement of such ayuda during the election period.

DOTr and LTFRB apparently belatedly realized the latter; last 22 March, it filed with the Commission on Elections (COMELEC) a petition for exemption for the fuel subsidy program (P1.674 billion), as well as the PUV Service Contracting (P5.9 billion) and PUV Modernization Programs (P1.26 billion). On 6 April, their petition was granted – with the caveat that other state agencies participating in the programs would have to individually submit specific implementation plans, including the target beneficiaries.