Duterte’s legacy, in his own words

FIVE YEARS. President Rodrigo Duterte talks about his legacy, with one year left to go as Chief Executive.

Facebook Twitter Copy URL
Copied
President Duterte has been weighing in on his achievements and failures during his five years in power. Here's what he's said, coupled with Rappler fact checks.

Philippine President Rodrigo Duterte is down to his last year in power and will deliver his last State of the Nation Address on July 26.

For him, his greatest achievement in the last five years is to challenge the country’s biggest and most influential tycoons, people he refers to as the “oligarchy.”

But he has had other things to say about his 2016 promises, like the crackdown on illegal drugs and corruption, his promise to solve Metro Manila traffic, and how the economy fared under his watch.

Starting June, Duterte has shared his thoughts on his legacy in various speeches and interviews, showing that the countdown to his last days in Malacañang is very much on his mind.

Here’s Duterte’s assessment of his five years in power, coupled with fact checks and contextualization by Rappler.

Nakita naman ninyo (You saw how), I went after the oligarchs and if that is one achievement that I can be proud of to myself alone, ‘yan, binira ko talaga ‘yong lahat sila (I hit all of them hard).

The President is particularly proud of getting Manila Water and Maynilad, owned by Ayala Corporation and Manny V. Pangilinan, respectively, to drop their demand for billions of pesos after winning a case against the government. Duterte’s 2019 outbursts also led to the scrapping of Manila Water and Maynilad contracts with government, and their replacement with agreements deemed by Duterte to be more “fair.”

In connection to his bid to topple the “oligarchy,” Duterte has bannered his attacks on ABS-CBN, owned by the influential Lopez family, which led to lawmakers rejecting a new franchise for the broadcast network. Duterte’s tirades led to the shutdown of the country’s biggest media network.

He also got Lucio Tan’s Philippine Airlines to settle its P6-billion debt to government and the Wongchukings of Mighty Corporation to pay P30 billion, the biggest tax fraud settlement ever collected by the government.

But not all Duterte’s moves against wealthy businessman were applauded. For instance, his attacks on the Lopezes were seen as politically-motivated and inextricably tied to his crackdown on free press and critical voices. His colorful threats against the Ayalas and Pangilinan and cancellation of deals sparked worries that government didn’t recognize the sanctity of contracts.

We have seen a lessening of the drugs actually in the Philippines. Here in Davao, no more, just a few. In other places like Manila, they are almost paralyzed because we have a better intelligence now and it’s working…. We have also minimized drugs to the barest minimum.

The President claims that only “two or three” cops who are into illegal drugs (he calls them “ninja cops”) remain in the force. He admits he was foolish to have promised he would suppress drugs within six months of his presidency.

“I said I can solve the problem in six months. Little did I know that I will be fighting my own government. So they (critics) were right. But I didn’t know,” he said.

But according to data from the Philippine National Police, only around half (52%) of barangays have been cleared of drugs from July 2016 to April this year – 21,891 out of 42,045. Almost P60 billion worth of drugs and laboratory equipment have been seized. Over 12,000 “high value targets” were arrested, a figure that includes 381 elected officials (3% of the total) and 775 drug group leaders or members (6.4% of total). But one of the biggest fish, Peter Lim, is still at large. There are photos of Lim posing with Duterte, but the President claims he didn’t know at the time Lim was a drug lord.

And though the PNP claims only 6,117 people died during anti-drug operations, human rights groups say the drug war death toll could be as high as 20,000 to 30,000 if extrajudicial killings are included.

With the lack of accountability for most of the drug war deaths, Duterte’s legacy may be a culture of impunity and violence.

I’ve been trying really my very best to curb corruption. Hindi ko maalis ‘yan (I can‘t eliminate it) overnight. But I have made a little progress in terminating, dismissing individuals.

Duterte’s biggest anti-corruption move was his creation of a “mega” task force against corruption in 2020. Since then, the task force has reported that most corruption complaints involve local governments, the Department of Public Works and Highways, Land Registration Authority, Department of Environment and Natural Resources, and Bureau of Customs.

No cases have been filed yet against any official in these offices, but the justice department has forwarded 30 cases to the Ombudsman and National Bureau of Investigation. It’s these two offices that would then file cases. 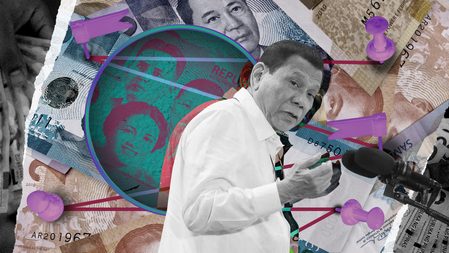 The only Duterte officials convicted of corruption so far are his fraternity mates Michael Robles and Al Argosino of the Bureau of Immigration, stemming from a 2016 bribery scandal.

Two major corruption scandals Duterte thinks he dealt with decisively are the “tanim bala” modus in airports and the “pastillas” scam involving extortions of Chinese nationals to allow them entry into the country.

But Duterte’s actions were limited to making colorful threats against airport personnel and ordering that owners of luggage where bullets are found will not be arrested.

As for the pastillas scam, Duterte’s biggest move was to fire Bureau of Immigration (BI) officials and personnel. He later on summoned them to Malacañang to present them with rolls of pastillas filled with money to “eat,” a public relations stunt meant to send wrongdoers a message.

It was actually opposition lawmaker Senator Risa Hontiveros who did the most to unearth the pastillas scam. The nine-month Senate inquiry she led directly contributed to investigations that led to legal cases against BI personnel.

I do not banner it, but you know, I’ve given out 60,000 hectares of land, including government land.

I said I will go for free education. It‘s a campaign promise, and I did. I said hospitals should be free. The Malasakit [Centers] of Senator Go are there.

Last March, Agrarian Reform Secretary John Castriciones gave the higher figure of 160,000 hectares of land distributed during the Duterte administration. Duterte had then given the order to distribute all unused government land to the poor.

In 2017, Duterte signed a law providing free tuition in all state colleges, a landmark law he will be remembered for. He did so despite opposition from his Cabinet economic team.

As for his healthcare legacy, it’s interesting that Duterte should mention only Go’s Malasakit Centers when he signed an even more impactful law in 2019, the Universal Health Care law, which aims to enroll every Filipino into the National Health Insurance Program, thereby giving them access to healthcare. Duterte also signed a law imposing stiffer penalties on hospitals demanding a deposit from patients requiring emergency treatment. He signed the Philippine Mental Health law in 2017 and a measure strengthening HIV/AIDS health services.

Economy: Dominguez ‘did his homework’

We are still BBB sa Standard and Poor. That was about BBB+ tayo…. Despite of our total lack of funds to address all the problems of governance, we were still given BBB+.

Still, Fitch has warned that the government’s conservative pandemic spending plan could endanger the country’s credit rating. In March, Moody’s said delayed economic recovery due to the surge in cases could cost the country its prized investment grade rating.

But good credit ratings, which allow the government and Philippine companies to borrow at lower interest rates, is not the only measure of the economy’s health.

The economy has been shrinking for five consecutive quarters, largely due to slow recovery from the pandemic. In contrast, Southeast Asian neighbors like Indonesia and Thailand have seen a smaller economic contraction while Vietnam and Singapore even managed to grow their economies despite the health crisis.

The latest unemployment rate of 7.7% in May means 3.73 million people are still jobless, owing largely to the pandemic. The poverty rate is expected to hover between 15.5% and 17.5% in 2021, far from the Duterte government’s initial target to bring it down to 14% by 2022. Meanwhile, involuntary hunger is still being experienced by double the number of families as before the pandemic, according to a Social Weather Stations poll.

Traffic is light now in Manila. If you go Cubao to airport, it’s about 15 minutes.

The mayor-turned-president had promised to make Metro Manila transportation projects a priority of his administration. Some of the major projects Duterte did pursue to tackle traffic are MRT7, Skyway Stage 3, LRT-2 East Extension Project, NLEX-SLEX Connector Road, C5 South Link Expressway, and Parañaque Integrated Terminal Exchange. But all these projects were actually started before Duterte’s term.

So far, two China-donated bridges, the Intramuros-Binondo bridge and Estrella-Pantaleon bridge, are two Metro Manila transport infra projects started and finished during Duterte’s term. Duterte also issued an order in 2019 for the government to reclaim public roads being used by private citizens, in a bid to decongest Metro Manila roads.

But the COVID-19 pandemic may be a bigger factor in somewhat easing the megacity’s traffic woes, since some businesses remain closed and mobility restrictions remain. – Rappler.com