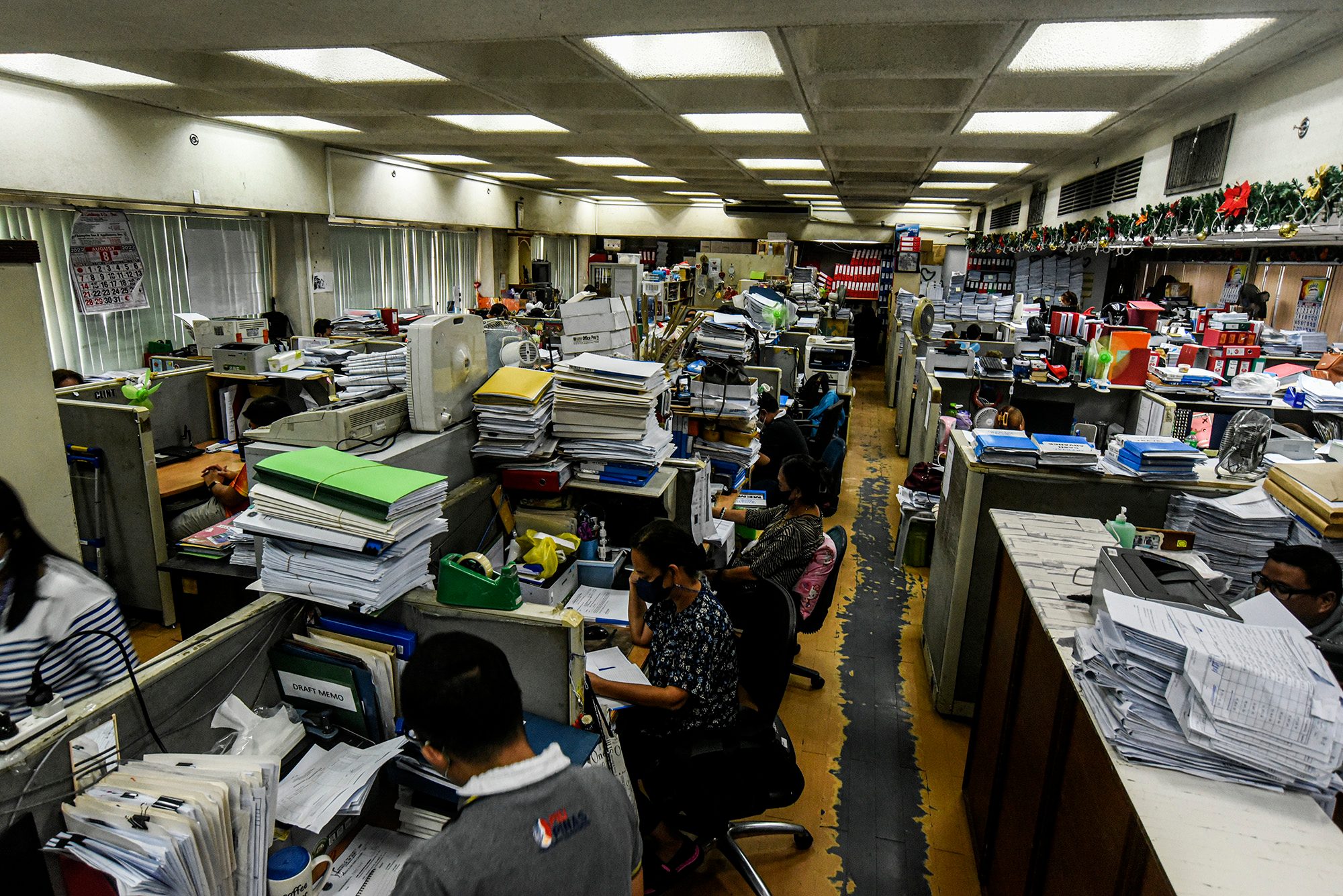 WORN-OUT. Age has caught up to many offices of the Commission on Elections in Palacio del Gobernador, the tall building in Intramuros, Manila where the poll body holds office.

MANILA, Philippines – Sarah Jean Payoyo, who has been with the Commission on Elections (Comelec) for 38 years, has long wished for better workplace conditions.

On the eighth floor of Palacio del Gobernador, the tall building in Intramuros, Manila, the long-time employee of the commission’s finance services department (FSD) shares a small office space – 231 square meters to be exact – with 54 other onsite employees (79 pre-pandemic), in addition to the many furniture and apparatuses.

It’s so crowded there that some of her co-workers were left with no choice but to put their tables along the hallway, just outside the department’s office.

Everywhere you look, there are giant piles of physical election records. They never run out and continue to pile up. The Comelec does not have a centralized stockroom, and the FSD alone has only a number of storage rooms – one on the seventh floor, and another on the ground floor – each around the size of a one-bedroom condominium unit.

“We just improvise, like put the bond papers on top of cubicles. It’s a fire hazard,” Sarah said. “The problem is we don’t have our own building.”

“Fire hazard” is not a word thrown around lightly, but even high-ranking former Comelec officials agree that Palacio is not the safest place to hold office.

The Comelec started to rent office spaces in Palacio del Gobernador around December 2006 to January 2007, according to spokesman Rex Laudiangco. That’s a few months before the March 2007 “great Comelec fire” – as some employees called it – that struck the old building just beside Palacio. That space is now a parking lot.

A history of fire-related incidents haunts the Comelec, said former poll commissioner Luie Guia, partly due to the physical state of these workplaces.

“There were small fires in the 1990s that were suspicious,” Guia told Rappler. “But 2007 was really this huge fire that if you’ve been a Comelec employee, you will say ‘I’m not surprised that it happened.’ It’s really a fire hazard, it’s made of old wooden materials.”

After a fire hit a portion of the IT department office in July, newly-minted poll chief George Garcia seized the opportunity to urge Congress to provide funding for a new building. It would cost P9.3 billion, he said (up from his earlier estimate of P8.2 billion), but even just a percentage of the cost would help jumpstart its construction.

For Sean Resurreccion, a Comelec employee since 2017, walking back-and-forth has been part of the job. But she’s not a messenger.

The Comelec’s vulnerable sectors office (VSO) – which Resurreccion is a part of as an election field officer – is located not in Palacio, but in another building rented by the poll body from Far East Managers and Investors Incorporated (FEMII), around 140 meters away.

Like other Comelec employees in the FEMI building, she has to walk multiple times every day, crossing a number of streets to get to Palacio del Gobernador, just to have paperwork signed. Since the Comelec’s offices are scattered inside Intramuros, some buildings are farther to reach.

Resurreccion was among those who helped write the Comelec’s feasibility study in 2020 on the need for a new Comelec building. She said it’s a project close to her heart.

“Reiterated in the feasibility study were the safety and security of employees crossing to and fro Palacio del Gobernador, because Soriano Avenue is a busy street,” she said.

For Payoyo, the walk might become more tedious soon. She said her department plans to transfer her and some other staff to the JS Contractual building – nearly half-a-kilometer away from Palacio – because of the limited space in their current office.

“Moving documents around from one division to another will be difficult,” Payoyo said, lamenting potential work backlogs that may arise.

“Coordination is a problem. Most of the VSO staff are newbies, and are unfamiliar where the offices of other departments are, who their heads are, and all. They do not have in-depth familiarity with their co-employees,” Resurreccion added.

Some Comelec officers from the regions travel from five to 12 hours a day to Manila just to have paperwork signed in the main office in Palacio.

“For instance, Comelec employees from Ilocos leave their hometown at 10 pm, and will arrive here in Manila before office hours. They just take shelter under the tree until work hours begin. I pity them,” Comelec employees’ union president Mac Ramirez said, adding that he sometimes offers them the union’s office so they could rest, even though it’s not the most ideal.

“If they have money, maybe they can book a hotel room, but it’s a waste if they are just going to submit documents and go home after,” he told Rappler.

If Congress grants the Comelec the funding for a new building, Ramirez’s anecdote will be a thing of the past.

A dormitory for visiting field personnel is among those included in the proposed building complex that the Comelec wants to construct on its two-hectare property along Macapagal Avenue in Pasay City.

Overall, spokesman Laudiangco said the nine-story building complex will have a main office, a warehouse complex, and a multipurpose building.

There will also be multistory parking, which is welcome news for employees.

“Every day, employees pay a parking fee, which could have been part of their savings,” Resurreccion said. “And we share the car park with the Bureau of Immigration, Bureau of Treasury, Intramuros Administration, and other nearby offices.”

“I’m with the education and information department. At one point, we were 60 in the department. Our manpower gets bigger as the election nears,” Ramirez shared. “Our offices are cramped. It has become a problem as we took social distancing into consideration.”

“Before, we were asked to open the windows. Sometimes, the air conditioning is broken. It’s very hot,” Payoyo said.

“Most of our offices lack natural lighting, especially those without windows. There is no conscious awareness on what happens outside the office. Sometimes, we will just be surprised by the heavy rain when we go out,” Resurreccion said.

“Our fellow countrymen should understand that if we have our own building, we will be more inspired to work, and our employees will gain morale,” Ramirez added. “It’s the public that benefits.”

Past Comelec administrations have tried, but failed, to reward employees with a building that they deserve.

The late former Comelec chairman Sixto Brillantes Jr. hit the ground running when he was appointed in 2011 by including this life-long dream among his goals. The Brillantes commission even bought the lot in Pasay in 2012.

“Strategic goal 10: To construct Comelec’s own main office building and field offices for improved morale, efficiency and independence,” the Comelec’s strategic plan 2011 to 2015 read. “Before 2016, complete the construction of a new Comelec building.”

But Brillantes retired from the Comelec not having finished the project, while succeeding administrations struggled to revive momentum, partly due to the numerous changing of the guards in the Comelec, and the draining poll cycle that inevitably sets aside internal projects to ensure the success of the elections.

Garcia, the most prominent election lawyer to lead the Comelec since Brillantes, said his goal is to finish the latter’s unfinished business.

“That building was the dream of chairman Brillantes, and my intention is to fulfill that dream,” he said. 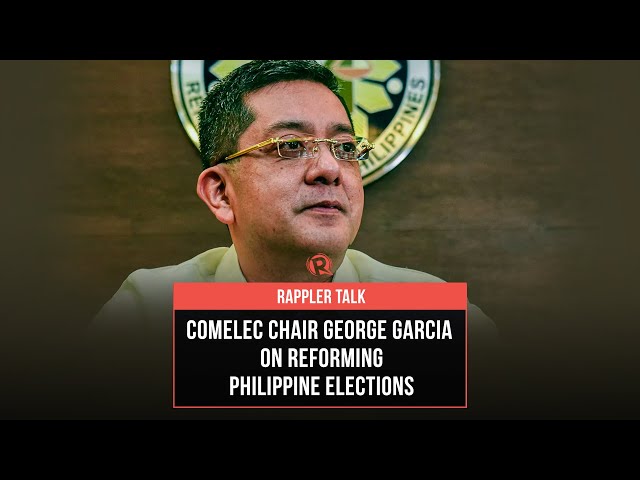 But can Garcia get it done, or will it just be another unreachable dream? (To be concluded) – Rappler.com

* All quotes in Filipino were translated into English, and some were shortened for brevity.