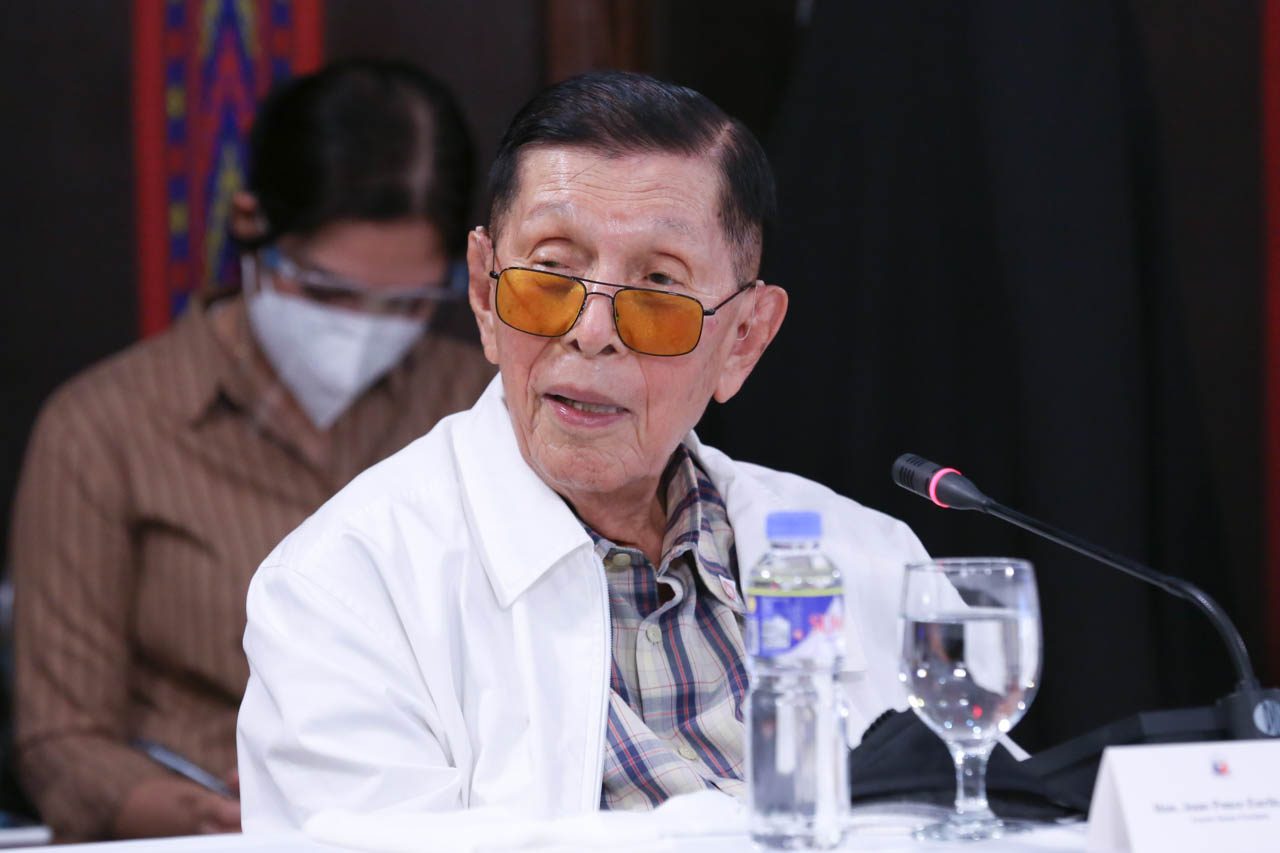 HIS VERSION. Former Senate president Juan Ponce Enrile shares his narrative with President Rodrigo Roa Duterte regarding the West Philippine Sea prior to the President's Talk to the People at the Malacañang Golf (Malago) Clubhouse in Malacañang Park, Manila on May 17, 2021.

Editor’s Note: Former senator Juan Ponce Enrile commended President Rodrigo Duterte on Monday, May 17, for his approach toward Beijing, which goes against his predecessor’s China policy. Nine years ago, however, Enrile was singing a different tune – and was in fact part of a crucial July 2012 Aquino Cabinet meeting about the West Philippine Sea.

The more lasting factor that shaped Aquino’s thinking about China had to do with the dispute over a vast expanse of waters in the South China Sea. Early on in his presidency, China showed brute force when it stopped Philippine survey ships in Reed Bank (Recto Bank) in 2011. This turned out to be the first in a series of China’s aggression in the contested seas, followed by a tense standoff in Scarborough Shoal in 2012 that left the Philippines defeated, and the building of artificial islands and military installations in islands and features that it claimed.

Aquino read up on China’s military and expansion, the communist system and how the Chinese, from their elementary education, had been taught that almost the South China Sea was indisputably theirs. “I tried to understand the communist system,” he said. “The Party is always right, the Party dictates to everybody, it can never be wrong.”

An April 2012 article in The Economist on the rise of the military in China gave him perspective, part of his education on the powerful neighbor that was throwing its size about. The People’s Liberation Army (PLA), according to the magazine, stated its doctrine that “If an enemy offends our national interests it means that the enemy has already fired the first shot.” As such, the PLA’s mission was “to do all we can do to dominate the enemy by striking first.” Moreover, the Chinese navy “appears to see itself as the guardian of China’s ever-expanding economic interests” including supporting sovereignty claims, for example, in the South China Sea. This article was published during the beginning of the crisis in Scarborough.

It was clear that China was not going to give up its foothold on Scarborough. And the Philippines, obviously, was no match to the formidable military might of China.

We had no choice in the sense that we give up everything, our west coast, or we fight for it.

Aquino’s frustration with China continued to grow, replacing his initial favorable stance towards the rising global power: “We were not getting anything from them except the recapitulation of the party line – all of these in the dispute was theirs…. Our difficulty was how do you deal with the Chinese? Unfortunately, most, if not all of the time, nobody really gave us definitive answers.”

When Foreign Secretary Albert del Rosario, who was equally frustrated with the fruitlessness of talks with China, proposed to Aquino to take them to an international arbitration court, he listened intently and kept the idea on his radar screen. His initial thoughts, he recalled, were on “the dangers of going into it and confronting the economic and military superpower in the region which were made very apparent.” But as events unfolded, “we had no choice in the sense that we give up everything, our west coast, or we fight for it.” 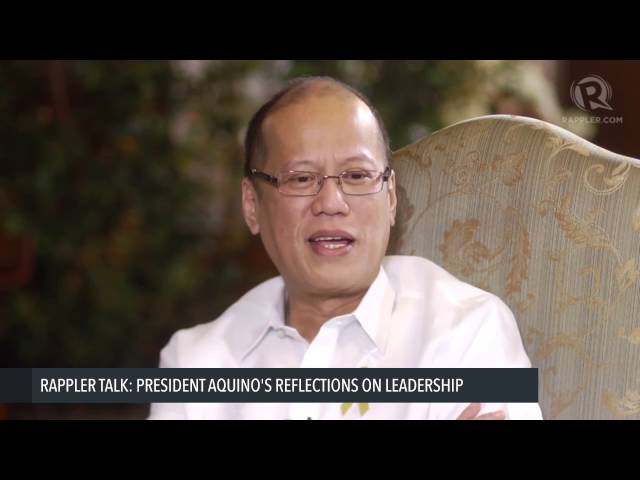 He remembered the quip of one ASEAN senior leader whom the Philippines lobbied for support in the West Philippine Sea: “There are big countries and there are small countries, that’s the way of the world.” That was realpolitik at work. Aquino mulled over this and thought that it was precisely the law that would serve as the great equalizer.

The Scarborough crisis pushed him to take the legal track. Suddenly, it became urgent, his last option in dealing with a raging behemoth. As he looked back, “It seemed like there was no stopping them. They were behaving as if all of this [West Philippine Sea] was theirs.”

He thought about the possibility of losing but dismissed it eventually because “It couldn’t be worse than where we were. At the end of the day, there will be at the very least a clarification as to everybody’s rights and obligations.”

His [Aquino’s] message was that our country wants to resolve the standoff peacefully and diplomatically.

Aquino called a crucial Cabinet meeting in July 2012, weeks after the country lost Scarborough Shoal, and invited the heads of the two houses of Congress, Senate President Juan Ponce Enrile and House Speaker Feliciano Belmonte. He also asked Senator Antonio Trillanes IV, his friend whom he had designated to backchannel with Beijing, to attend.

In the midst of the standoff, Trillanes met a number of times with Chinese officials, contacts he developed during an official visit to Beijing in 2011. His mission, as Aquino had instructed, was to de-escalate tension in Scarborough Shoal. “His [Aquino’s] message was that our country wants to resolve the standoff peacefully and diplomatically,” Trillanes wrote in his notes on the backchannel talks. “He also requested for confidence-building measures.” In all, the senator said he had more than a dozen meetings held in Manila and Beijing and he reported directly to the President. These backchannel talks, however, were taking place unbeknownst to Del Rosario. This resulted in an absence of coordination, like trains on two parallel tracks running at the same time.

At the Aguinaldo state dining room in Malacañang, Del Rosario briefed everyone on the state of affairs in Scarborough. Then Aquino posed the question, as Enrile recalled it: should we confine our dispute with China over the West Philippine Sea to a bilateral level? Or should we involve our allies and go multilateral?

Enrile said the country should assert its rights and consult its allies first without forgoing bilateral talks.

Filing a case with an international arbitral tribunal was not yet on the agenda. Aquino simply wanted to sound off his inner circle and the leaders of the legislative branch about departing from a purely bilateral approach.

Manuel Roxas II, interior secretary, kept some notes of the meeting, as was his practice. The discussion veered towards “internationalizing” the issue which, he said, would be the country’s “biggest and ultimate weapon” against China. “We could defer it and make China know. Withholding it shows our desire to de-escalate.”

Enrile said the country should assert its rights and consult its allies first without forgoing bilateral talks. The impact of such a move on trade and other aspects of the economy were touched on as well.

The meeting ended with a majority supporting “internationalizing” the dispute. In what way, the details were not threshed out. – Rappler.com