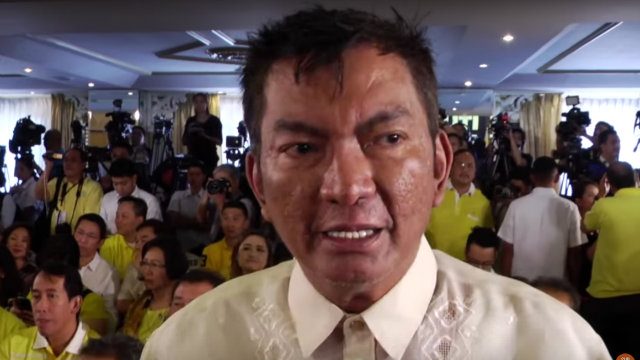 He once predicted a huge bump in Liberal Party (LP) standard-bearer Manuel Roxas II’s preference numbers but with less than a month to go before election day, Albay Governor Joey Salceda was nowhere to be seen.

The LP’s provincial chair in Albay did not join the ruling party’s “show of force” for Roxas and running mate Leni Robredo on Thursday, April 14, at the historic Club Filipino in San Juan City. The gathering saw governors, legislators, and mayors reaffirm their commitment to the LP tandem.

Salceda’s absence only fuels speculation that the Albay governor is set to jump ship.

Not too long ago, Salceda was solidly behind Roxas, and even called himself a part of the LP stalwart’s “inner circle.” He was in Club Filipino when President Benigno Aquino III formally endorsed Roxas’ bid for the presidency back in July 2015.

“He is my chosen presidential candidate to support in the 2016 elections. He is a man of integrity, with a clean record, and who can pursue President Aquino’s tuwid na daan (straight path) policies and programs for the country’s development,” said Salceda in June 2015, when he announced his support for Roxas ahead of Aquino’s formal endorsement.

With less than a month to go before election day, Roxas’ numbers have yet to rise significantly in a tight race among 4 presidential contenders. He has yet to top an opinion poll.

Is he or isn’t he jumping ship? Rappler tried to get Salceda’s side but has not gotten a reply as of posting.

Back in 2010, Salceda switched parties with less than a month to go before election day. He was once a staunch supporter of former president Gloria Macapagal Arroyo, and a member of the Lakas-Kabalikat ng Malayang Pilipino-Christian Muslim Democrats (Lakas-Kampi-CMD), then the ruling party.

Salceda left Lakas-Kampi-CMD and crossed over to the Liberal Party.

Back then, Salceda said he “accepted” the challenge of Aquino, his Ateneo de Manila University classmate, to chair the LP in Bicol. – Rappler.com