Oct 28, 2016 10:39 AM PHT
Pia Ranada
Facebook Twitter Copy URL
Copied
In China, Duterte chews gum beside President Xi Jinping, while in Japan, says a former government official with close ties to the Japanese embassy, he is late for a meeting with their foreign minister 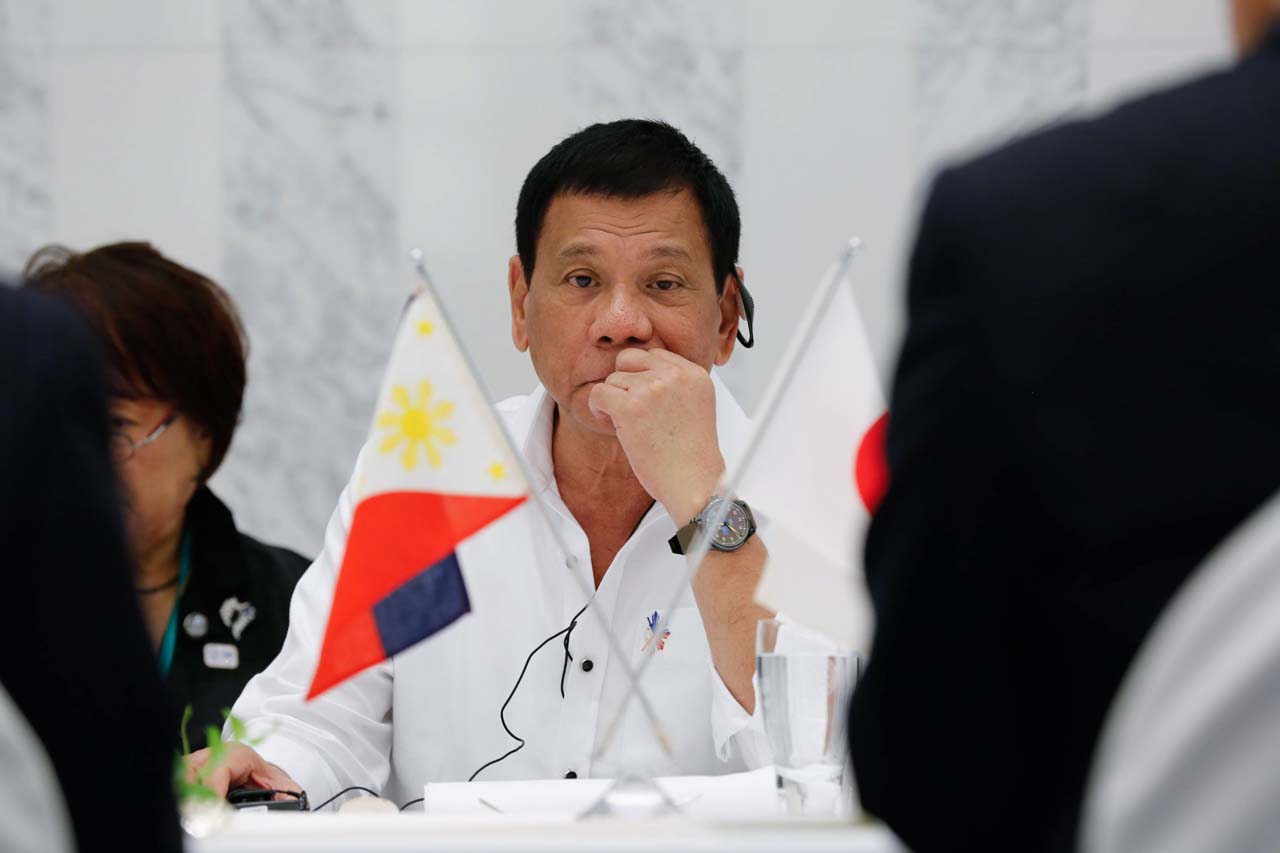 Philippine President Rodrigo Duterte just got back from visits to two of the most powerful countries in Asia: China and Japan.

These countries are not only influential but boast centuries-old traditions and customs. How did Duterte, known for his profanities and informal ways, fare in terms of respecting protocols that come with visiting foreign lands and meeting their dignitaries?

Things seemed to be looking up during Duterte’s press briefing before leaving for Beijing on October 18. Almost unbelievably, he uttered not a single curse word and did not unleash rants during his unusually short and relatively controlled speeches and question-and-answer sessions.

Once in China, the Philippine President fond of wearing jeans at formal occasions, donned a dark suit instead.

Then October 20, Duterte’s busiest day in Beijing, rolled in. That day, a bilateral meeting with Chinese President Xi Jinping followed soon after the signing of 13 agreements between their governments. It was the most awaited event of his state visit.

Duterte walked into the room with Xi, his hands stuffed into his pants’ pockets, in full view of Filipino and Chinese officials, reporters, and cameramen.

During the meeting, as the moderator read out each of the 13 agreements to be signed and the names of officials who would sign them, Duterte was seen closing his eyes several times as if he was dozing.

Perhaps his earlier-than-usual schedule was getting to him? Duterte arrived at the Great Hall of the People at around 10:30 am. The nocturnal President is used to starting his public activities after lunch.

As the rest of the signing went on, Duterte kept his eyes open but began chewing gum, definitely not something heads of state are expected to do in a formal ceremony.

In Japan, a country with perhaps among the most protocol-conscious cultures in the world, Duterte was not chewing gum or closing his eyes for long periods during his speech beside Prime Minister Shinzo Abe on October 27.

But the night before, according to a former government official with close ties to the Japanese embassy, Duterte was late by 16 minutes for a meeting with Foreign Minister Fumio Kishida after his event with Japan-based Filipinos.

Keeping a minister waiting for that long surprised some on the Japanese side, the same source said.

Special Assistant to the President Christopher Go has not responded to Rappler’s request for comment on the incident. Go takes care of Duterte’s schedule.

There was already a little bit of confusion over the scheduling of his China trip in relation to Japan.

Someone in the Philippine embassy in Japan sought confirmation with the Philippine government when they heard Duterte was visiting Beijing ahead of Tokyo even if no less than Abe had invited him to Japan first.

Abe had formally invited Duterte to visit his country in early September during a regional summit in Laos.

Something of the confusion must have reached Duterte because he mentioned it in a speech on October 11, a week before his China trip.

“China has repeatedly invited me. I have accepted the offer. That was a little bit of ano, kasi I was supposed to, magpunta ng Japan ahead. But Japan gave a definite date. I forgot all about – basta nagbigay sila ng definite date eh. So wala akong magawa,” he said to newly-appointed government officials.

Duterte went on to explain that because he was free on the days before the set Japan trip, the visit to China was scheduled on those available days.

Duterte’s informal ways made some Japanese officials worried about how he would behave during his courtesy call on Emperor Akihito, a revered figure in their country.

“They are paranoid about him chewing gum in front of the Emperor,” the Associated Press reported.

Duterte was set to meet the Emperor on Thursday, October 27, but fate intervened. That day, the Emperor’s brother Prince Mikasa died, prompting the cancellation of the meeting.

Long-time diplomat Leticia Ramos Shahani stressed the importance of protocol in diplomacy, something diplomat-in-chief Duterte should know about.

“In diplomacy, protocol is very important,” she had said in a forum held while Duterte was in Japan.

She added: “If you have to attend a reception, you do it for the country. It’s a patriotic act.” – Rappler.com