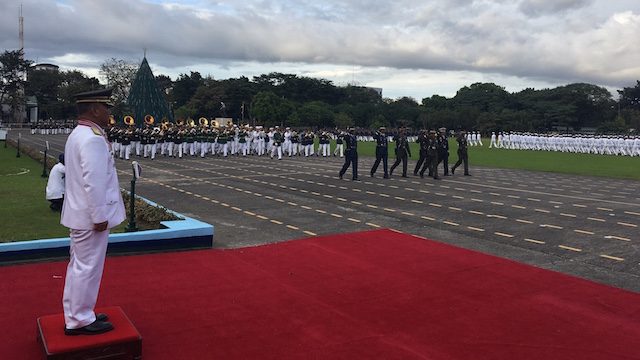 (Updated) Newly retired Armed Forces chief General Ricardo Visaya will not have his much-deserved vacation just yet. At least that’s what his commander-in-chief indicated on Wednesday, December 7, during the change of command ceremony.

The audience at the Camp Aguinaldo grandstand laughed.

“Choose your position. That is how grateful the nation is to you. Mamili ka ng position diyan, gusto mo kausapin si Delfin, okay rin ‘yan (Choose a position. If you want, talk to Delfin. That is also okay),” Duterte teased.

He was referring to Defense Secretary Delfin Lorenzana. There was a news report that claimed Visaya would eventually replace Lorenzana.

On Friday, December 9, Lorenzana put an end to those talks. At the arrival ceremony for BRP Andres Bonifacio, the 3rd warship acquired from the US Coast Guard, Lorenzana vowed to make it his mission “for the next 6 years” to push for the modernization of the Philippine Navy.