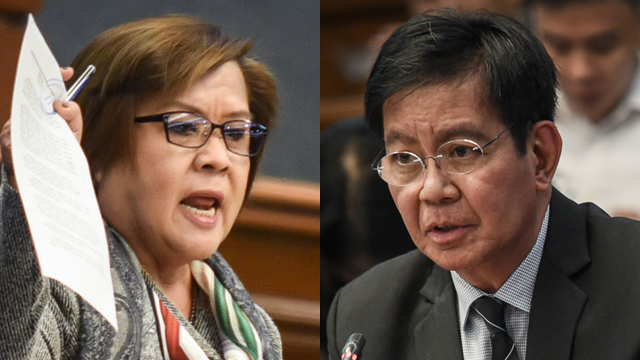 “Most wiretapped individual on the planet.”

This was how Senator Panfilo Lacson described Senator Leila de Lima, before he interpellated her on the bill seeking to amend the Anti-wiretapping Law.

“Gladly and willing to probably the most wiretapped individual on planet Earth,’ said Lacson in jest.

To which De Lima lightly replied, “Thank you for acknowledging that.”

Lacson, in turn, was sympathetic to De Lima’s predicament.

“But it may comfort you to know that more than a decade ago, I was also holding the same distinction of being the most wiretapped individual,” he said, referring to the Arroyo administration, when he was the number one enemy of then president Gloria Macapagal-Arroyo.

Lacson went into hiding in January 2010 when he was ordered arrested in connection with the killing of publicist Salvador Dacer and driver Emmanuel Corbito. Shortly after, De Lima was appointed justice secretary and launched a manhunt against him.

Since they were on the topic of being government enemies, Lacson also included another senator who opposed a sitting president.

“And not only that, if we look at the gentleman on my left… he was the title holder from 1986 to 1989, he was the most wiretapped individual at that time,” Lacson said, in apparent reference to Senator Gregorio Honasan, who led several coup attempts during the first Aquino administration.

Turning serious, De Lima said that while the bill would deter crimes perpetrated by individuals, she is unsure if it would prevent law enforcers from committing crimes.

“Because right now as we speak and given the very honest acknowledgment earlier, I know it was meant to be a joke, but I think it was not a joke. That really, wiretapping certain public figures is more the order of the day when it comes to our law enforcers or state agents,” De Lima said. – Rappler.com