Jan 21, 2017 11:00 AM PHT
Bea Cupin
Facebook Twitter Copy URL
Copied
(UPDATED) For the first time since the May 2016 elections, members – and allies – of the once-ruling Liberal Party meet over dinner to celebrate its 71st anniversary 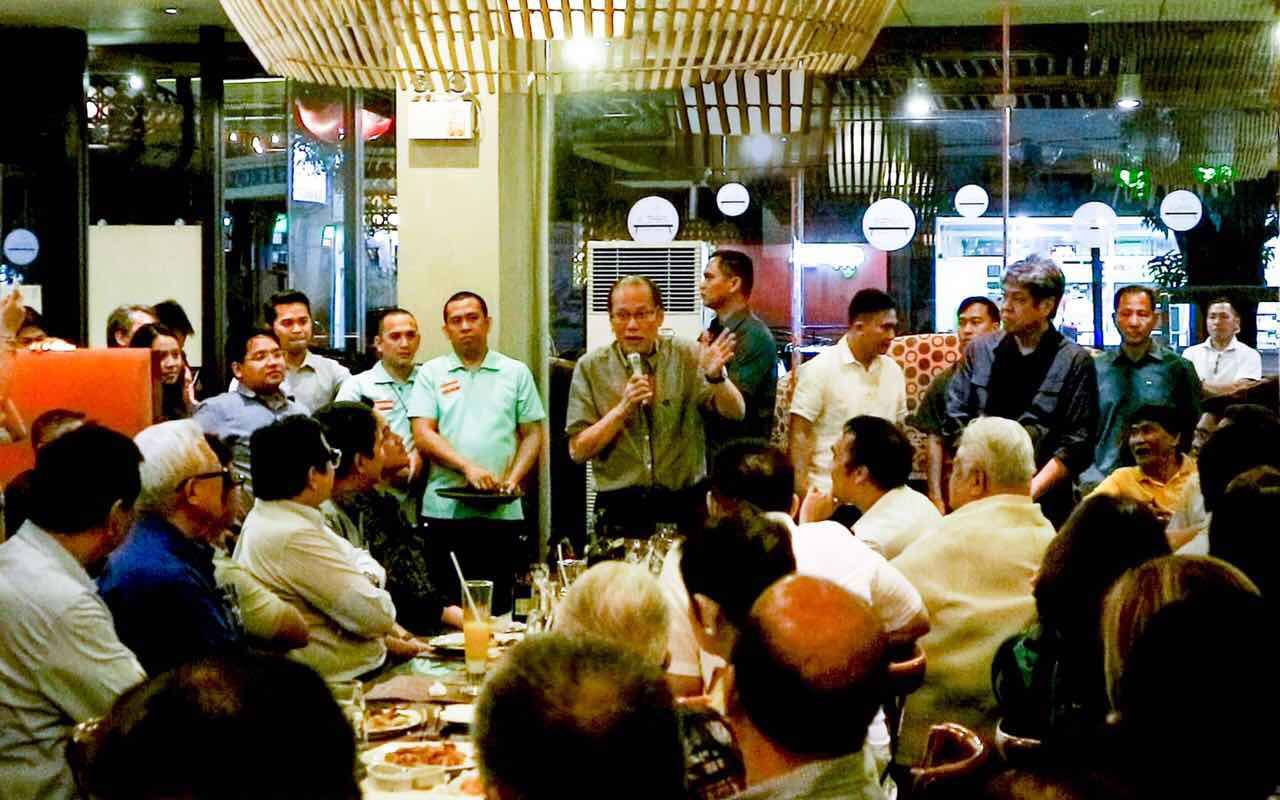 (UPDATED) A day after President Rodrigo Duterte belittled the once-ruling Liberal Party (LP) in a public speech, its remaining members and allies held a quiet gathering to celebrate the party’s 71 years of existence.

(Go ahead and scare me with that “Oust Duterte.” Those yellows – in Bisaya, yelo means ice. You but yelo, that’s ice. But the [Liberal Party] has long melted, after the elections, it melted. So who still wants to be part of the Liberal Party? Nobody. Who is Duterte’s friend? See. I told you.)

The LP is the party of Duterte’s predecessor, former president Benigno Aquino III. For 6 years, the LP dominated Philippine politics, with party members occupying key positions in the executive and legislative branches, including local government units.

But as is the case after every election, many party members soon jumped ship to the new ruling party – Duterte’s PDP-Laban.

It was an informal gathering for the most part, with short messages delivered by Aquino, Robredo, and current party president Senator Francis Pangilinan.

In a statement on Saturday, January 21, Pangilinan said that during the social gathering, Aquino’s message to everyone simply focused on the need for the party to “continue to work tirelessly for the benefit of our people.”

Pangilinan said, “The LP will continue to make its stand known on various national issues of the day such as our continuing opposition to the Marcos burial, our stand against extrajudicial killings and our opposition to the death penalty among other things.”

“It was not just LP members but allies as well,” said one source who attended the party. Absent from the gathering was defeated LP 2016 standard-bearer Manuel Roxas II, who is vacationing abroad.

Robredo, in her speech, noted that it was the first time for the LP to gather since the May 9 elections.

In the 7 months or so since the 2016 elections, the party has never convened a formal meeting. For the most part, members have been meeting in small groups.

Was politics part of the conversation at Mesa?

“It was not for planning but a fellowship,” said the same source.

Pangilinan, however, will soon be convening “strategy meetings” for “party strengthening.”

“It’s going to be an attempt to reevaluate the party,” said the source.

In a Thought Leader piece for Rappler, Pangilinan said: “From being the ruling party to the party at the margins, we at the Liberal Party are currently undertaking a process of deep consultation with our members and other stakeholders in order to determine together our strategic direction.”

There are at least 32 LP members in the House of Representatives, but that group is split between those who joined the PDP-Laban-led majority coalition and those who are part of the “independent minority.”

In the Senate, 4 senators are members of the LP, while another senator, Risa Hontiveros of Akbayan, is an LP ally. (READ: Senators to LP: Decide if you’ll stick with majority)

The LP has yet to count how many LP members are left in local government positions.

“A lot have moved or will move with our concurrence,” said another party source, who declined to be named.

Duterte and the ‘yellows’

Despite its dwindling numbers and delays in “party consolidation”, the LP has been a target of Duterte’s tirades as of late. He accuses the party of plotting his ouster.

“’Yung mga yellow diyan, nagde-demonstrate kayo (You Yellows, you are demonstrating)…You want me out because you cannot accept defeat,” said the President in December 2016.

The party has denied these allegations.

In his statement, the LP president said, “We reiterate the LP position that we are willing to support the administration in its initiatives that we believe will be beneficial to our nation but we will not hesitate to express our dissent on matters we believe will not serve the public interest.”

Ties between the LP and Duterte soured during the course of the campaign period. While the former Davao City mayor endorsed Aquino and Roxas in 2010, the party and the President found themselves on opposing sides 6 years later.

Duterte and Roxas, long-time friends, constantly bickered during the campaign. Aquino even went as far as campaigning against Duterte and calling on Roxas and another presidential candidate, Senator Grace Poe, to unite against the Davao City mayor.

And while Duterte and Robredo were never directly at odds during the campaign, their working relationship began and ended badly. She resigned from his Cabinet after she was told to “desist” from attending all Cabinet meetings.

What’s next for the once-dominant party? It’ll be up to their 40 or so members to decide. – Rappler.com