No public apology yet from Aguirre for fake news 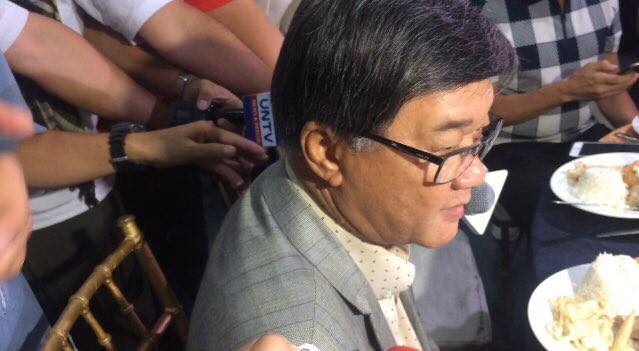 Justice Secretary Vitaliano Aguirre II has not made any public clarifications, more so a public apology – at least not yet – as of Thursday, June 8, even though Senator Paolo Benigno “Bam” Aquino IV earlier said Aguirre told him he would do so that day.

“Nag-usap na kami (We already talked). He already apologized. He told me, with all the reports, he got confused. Na-confuse daw po siya sa mga reports na pumasok sa kanya (He said he got confused with all the reports that he received). Humingi siya ng paumanhin (He apologized). He said he would publicly clarify and apologize today,” Aquino said in a press conference on Thursday.

Aguirre evaded the media all afternoon during the 116th anniversary of the Office of the Solicitor General (OSG) in Pasay City.

Later, his colleagues at the dinner table, who included Senator Loren Legarda, Representative Rudy Fariñas, and Presidential Legal Adviser Salvador Panelo, suggested to reporters to wait until Aguirre finished his dinner before doing the interview.

Aguirre, however, slipped away and evaded the media. He left the building quietly in the middle of the dinner.

During the brief ambush interview before reporters were asked to allow Aguirre to have dinner, all the justice secretary could muster as a reply when he was asked about the public apology he had supposedly promised Aquino was, “Monday.”

Aguirre got himself in a bind when he told reporters on Wednesday that a meeting among Marawi clans and opposition lawmakers may have triggered the crisis in Marawi.

He named the lawmakers as Aquino, Senator Antonio Trillanes IV, Magdalo Representative Gary Alejano and even former presidential political adviser Ronald Llamas. Aguirre said the lawmakers and Llamas were in a meeting in Marawi on May 2. But the individuals he named provided proof they were not in Marawi on the said date.

Trillanes, Aquino, and Alejano criticized the justice secretary for falling for fake news.

Aguirre earlier said the media misquoted him as he publicly apologized to the Alonto and Lucman clans of Marawi City, who he said, met with lawmakers.

On Thursday, Aguirre also denied ever having showed the media the photo of the opposition lawmakers and Llamas, which turned out to have been taken at the Iloilo airport in 2015. That photo was posted on the Facebook page of Liberal Party member Zamboanga del Sur Vice Governor Ace William Cerilles.

“Wala akong ibinibigay na picture sa inyo (I never gave you any picture),” he said during the brief ambush interview, but was reminded by a reporter, “Pero pinakita niyo po sa camera (But you showed it to our camera).”

But Aguirre did show the photo from his phone on Wednesday, June 7, and quickly hid it before camera crews could get a good shot.