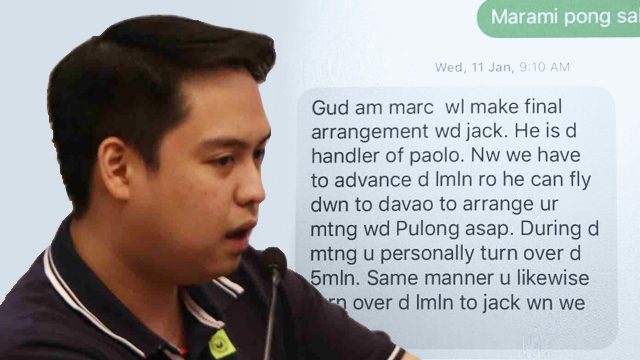 The Senate is currently investigating the P6.4-billion smuggling of 604 kilos of methamphetamine or shabu into the Philippines.

Customs broker and fixer Mark Ruben Taguba – who was supposedly involved in the illegal shipment and has become a resource in the hearings – said that a certain “Jack” helped him with his transactions with the Bureau of Customs (BOC). Jack is said to be the “handler” of presidential son and Davao City Vice Mayor Paolo Duterte.

On Tuesday, August 22, Taguba read messages from a certain “Tita Nanie” who, he said, introduced him to the Davao Group, which has helped him clear shipments at the bureau.

He showed a text message from Tita Nanie dated January 11, wherein she mentions the links of the group to Paolo Duterte.

“Good am Marc will make final arrangement with Jack. He is the handler of Paolo. Now we have to advance the [money] so he can fly down to Davao to arrange your meeting with Pulong asap. During the meeting, you personally turn over the 5 million. Same manner you likewise turn over the [money] to Jack when we meet.”

Pulong is the nickname of the Vice Mayor.

Taguba said that while he did fly to Davao where he met Jack and turned over P5 million, he never met Paolo directly. Vice Mayor Duterte had earlier already denied involvement in the so-called Davao Group inside the BOC. President Rodrigo Duterte has also defended his son from allegations.

In that Senate hearing, it was also mentioned that Taguba had a slew of exchanges with Tita Nanie. Rappler obtained a copy of the text messages. (READ: Customs broker: Paolo Duterte’s ‘friend, handler’ got bribe money)

These are among the highlights of what was discussed in the almost-100 pages worth of text messages between Taguba and Tita Nanie obtained by Rappler – from their first exchange on January 10 until their final message to each other on May 19.

1. Paolo was referred to two more times in the text exchanges

Aside from the January 11 text message from Tita Nanie wherein Paolo was mentioned, he is mentioned twice more, and referred to simply as “P”.

On Friday, March 3 (Fridays are notoriously known as collection days for those involved in illegal activities at Customs), Taguba tells Tita Nanie that he has already paid the fees for “Tito Jojo and P”.

“Tito Jojo” refers to Jojo Bacud, whom Taguba said, also helped him with illegal shipments. Taguba said Bacud was also the person who introduced him to Tita Nanie.

Paolo was again mentioned in a Friday, March 17 text, wherein Taguba tells Tita Nanie that he needs help from Jack to clear a shipment.

“Tita there’s no need to panic. I haven’t filed it yet. All I need from Tito Jack is for either P or Mance to call collector Jet Maronilla that we have go signal for our SPL,” Taguba texted. SPL refers to Special Permit to Load. The shipment concern is no longer raised again, suggesting it was resolved.

At the August 29 hearing, Carpio was implicated for visiting the office of outgoing Customs Commissioner Nicanor Faeldon.

Carpio, a lawyer, admitted to the visits, saying he has clients who have transactions with the Bureau. He denied the visits to the BOC are linked to smuggling. 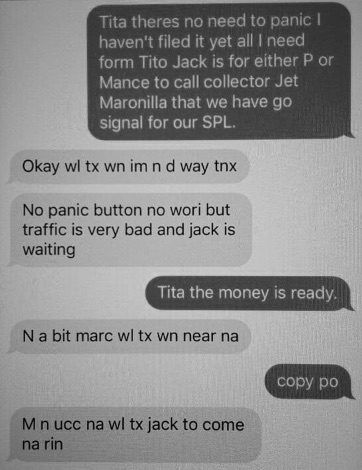 Tita Nanie, who told Taguba that Jack is Pulong’s handler, appears closely tied to the Davao Group. Throughout the messages, Tita Nanie exhibits a tight relationship with the Davao Group, specifically Jack. She serves as the group’s coordinator tasked to meet with Taguba several times, and negotiator in behalf of the group.

Sample messages include the following:

On February 9, Tita Nanie tells Taguba that the Davao Group wants an extra fee for the plywood and ceramic tiles that his client wants to ship into the country.

“Marc these items are listed as special kina Jack and they expect 30 thousand please consider.” On March 17, she also dictated amounts for payment to the Davao Group, telling Taguba, “Okay, due to Jack is 6 thou for Davao and 1 thou for Jack and 3 thou for Tito Jojo.”

She even chastised the group after examiners raised the alert on a number of Taguba’s containers despite his constant and timely payments.

On March 3, she texted Taguba: “Told Noel to meet Jack to tell him I’m disgusted and to fulfill their commitment.”

She added, “Wait Marc galit me kay jack told him na manage his boys para no sablay then eto na naman.” (Wait Marc, I’m angry at Jack. I told him to manage his boys so no complications and here we go again.)

Tita Nanie also appears to have a pull in the Duterte administration.

On May 9, Taguba sent credentials of a certain Fidel B. Villanueva IV, CESE to Tita Nanie, asking for her help to appoint him in government.

He said about Villanueva: “He is basically family Tita. If we assure him a position we don’t ever have to worry about the future.” He also requests that the post be a “presidential appointment na (that is) permanent.”

Tita Nanie responded, “No problem tell him to prepare the PDS (personal data sheet). Give 2 folders. Make sure he is family.”

Later messages suggest, however, that the push for his appointment was dropped.

On May 11, Taguba again asked Tita Nanie’s help to appoint someone in government.

“Tita do we have any way to connect with Bong Go? This person is overqualified is a top lister CESE (Career Executive Service Eligibility) and has no cases whatsoever. His loyalty is only to us and no other his name is Paul Chua.”

She doesn’t reply to the text, but they appear to converse offline because on Friday, May 12, Taguba asks that the position be “a presidential appointment po sana para may asim (hopefully, so there’s weight).”

Again, there is no text reply but on Saturday, May 13, he says, “Tita Nani good morning po, yung papel po ni Dr Paul Chua pa update po sana.” (Can I have an update on Dr Paul Chua’s papers?)

As of publication time, Chua has yet to be appointed in government.

5. Tita Nanie knows many people in the BOC

Aside from Nepomuceno, Tita Nanie also repeatedly mentions other characters in the BOC.

On April 10, Taguba tells Tita Nanie, “Tita, I have potential clients for sugar and rice volume SPL. Should I get po or not? Kung kunin po naten magkano po cut para da group (If we take it, how much is the cut for the group)?”

Tita Nanie replies, “In a bit, getting green light.” 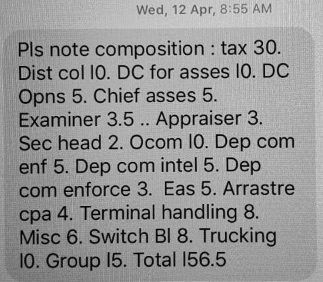 On April 12, Tita Nanie tells Taguba the details of pricing for rice shipments and who to pay.

According to previous text messages, the numbers are in thousands.

Could Tita Nanie be the Janet Napoles of Customs?

Former Import Assessment Services (IAS) chief Milo Maestrecampo was mentioned repeatedly in text messages between the two. Maestrecampo submitted his resignation to Malacañang after Taguba named him as a regular recipient of grease money.

The first mention of Maestrecampo came on March 6, when Taguba asked Tita Nanie about a new policy on the shipment of used scooters.

Tita Nanie responded, “Talked to Milo na will discuss with you.”

Maestrecampo was mentioned again on March 12, when Tita Nanie said she was setting up a meeting between Maestrecampo and Taguba, as requested.

On March 18, Tita Nanie instructs Taguba to “use new consignees… instruction from Milo.”

On April 3, Tita Nanie also tells Taguba, “Good morning Mark, will finalize tonight your concern re taxes from MM and BB. Let’s have a pleasant week.”

Based on previously discussed names in the text messages, MM is Milo Maestrecampo and BB is for “Big Brother.”

In other text messages from Tita Nanie, she passes on advice to Taguba from “MM” on how to best allow shipments to go through, and says “BB and MM” have approved questionable resin shipments. 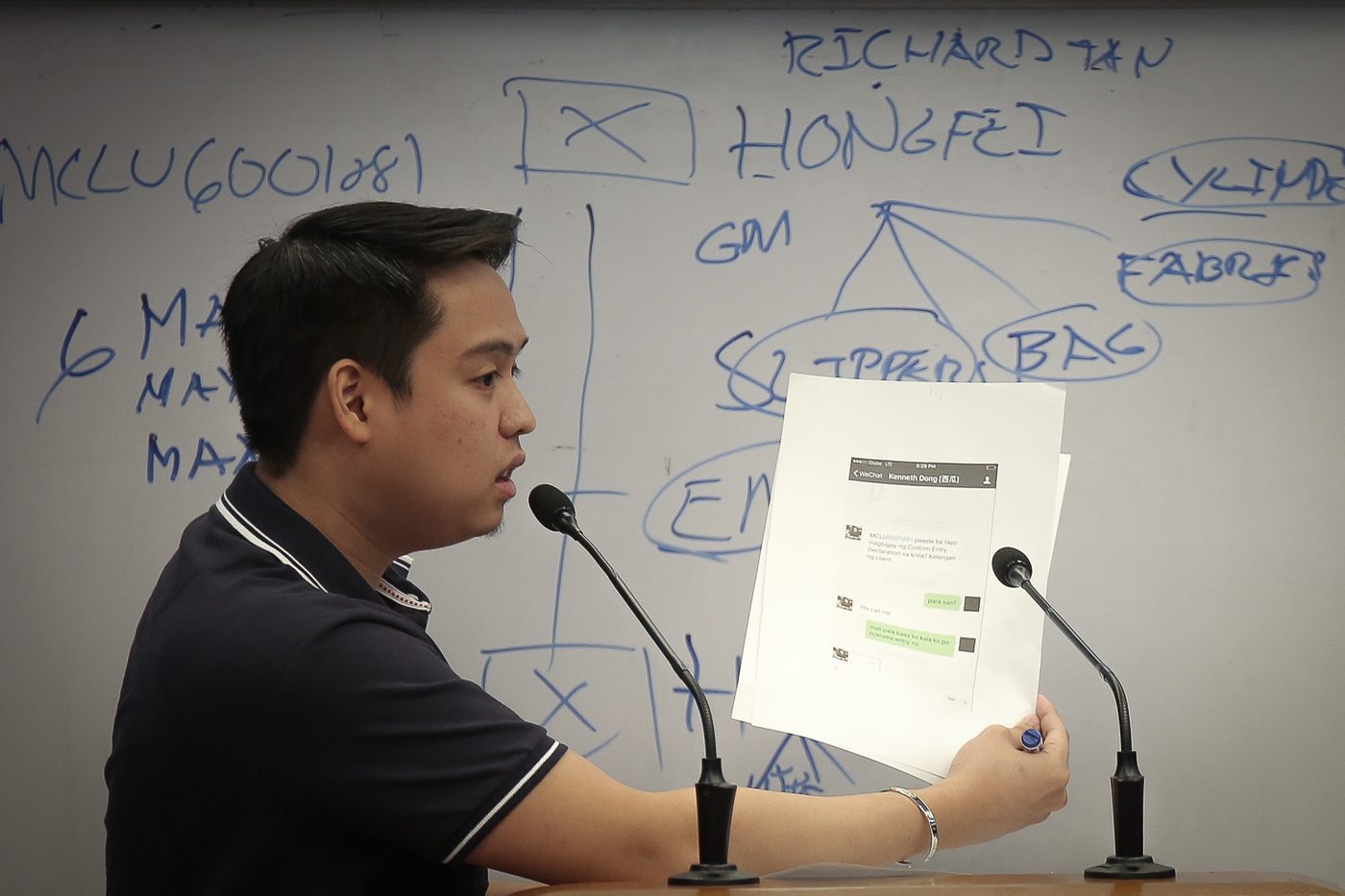 Taguba claimed in the hearing that Tita Nanie did not only introduce him to the Davao Group, but also to a third group that helped him with his shipments when the Davao Group became inconsistent.

The third group is also allegedly from Davao, and includes a certain “Noel” and “Big Brother,” whom Taguba claimed is “General Capuyan.”

Trillanes tagged Capuyan as Allen Capuyan from the Philippine Military Academy Class of 1983 and said he is assigned to Davao City.

As for Maestrecampo, Taguba on May 16 said IAS “holds all the cards so I can only say yes to what they want from me,” suggesting the power Maestrecampo wielded when he was still with the BOC.

Former BOC Commissioner Nicanor Faeldon is mentioned once in the text messages. Faeldon has since resigned from his post, and was the one who brought fellow Magdalo soldier Maestrecampo onboard at the BOC.

On February 27 at 8:17 am, Taguba sent a message to Tita Nanie asking, “Did you meet with Gambala’s group na po (already)?”

Customs Deputy Commissioner Gerardo Gambala is also a Magdalo member, appointed by Faeldon. The text message came after repeated alerts on his shipments. The message suggests Faeldon, is of a separate group from the Davao Group, seeing that Taguba’s containers were getting alerts despite Taguba’s payments to the Davao Group.

Various messages show Friday payday continues to this day. On Fridays, during the course of their 4-month conversation, Taguba consistently meets with Tita Nanie to hand over payment.

On Friday, March 17, Taguba texts: “Tita the money is ready.”

On Friday, March 24, a similar conversation ensues. Tita Nanie tells Taguba, “Marc make sure to separate 7 thousand for Tito Jack and give me the 3 thousand in 3 separate envelopes. Thanks Marc.”

On top of the P5-million enrollment fee, Taguba said in past hearings that he paid the Davao Group P10,000 per container. Taguba said he averaged 100 containers a week, amounting to P1 million. Jack, he said, would fly to Manila every Friday to get the money from him. – Rappler.com