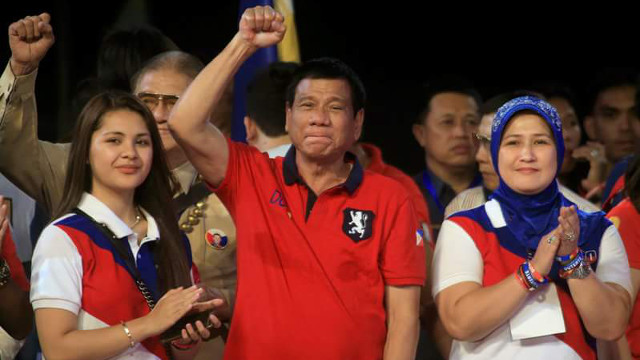 (UPDATED) The woman whose family’s ukay-ukay business gave rise to suspicions that Paolo Duterte is a smuggler had been welcomed as a guest in Malacañang by none other than President Rodrigo Duterte.

Photos seen by Rappler show that Lovelie Sangkola Sumera, ex-wife of Duterte’s eldest son, was a guest at Malacañang at least twice.

This contradicts statements made by the President distancing himself from Sumera, even claiming he had not seen her for years.

“She is not a Duterte. She is a Sumora – Sunera – Sumera. And I haven’t seen that one for the last 10 years,” said Duterte last August 29, during a mass oath-taking of new government appointees.

But Sumera attended the Eid’l Fitr celebration in Malacañang last June 27, only two months before Duterte made the remark. 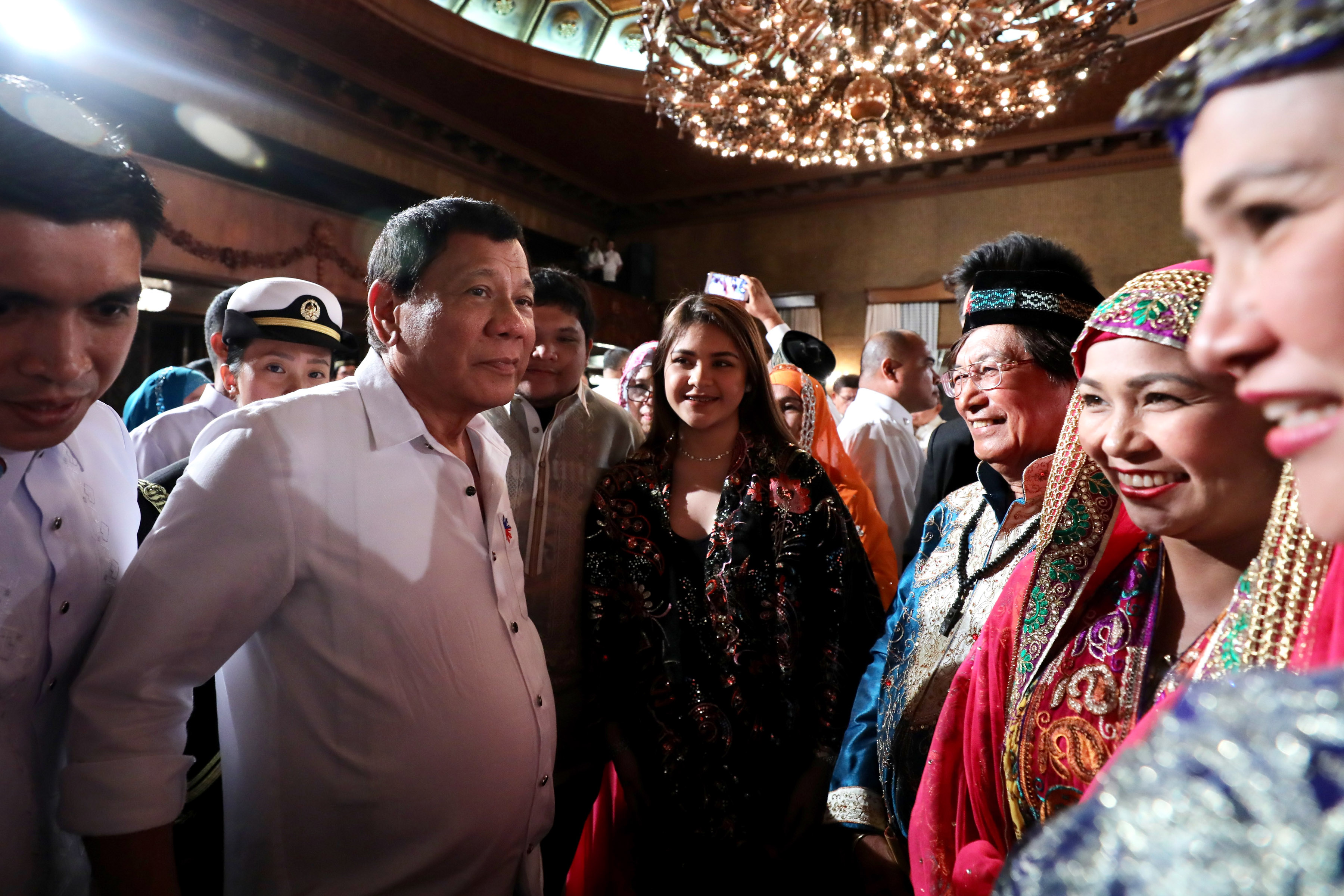 Photos show she was there along with her daughter Isabelle Duterte and son Omar. Official Palace photos show Duterte with Isabelle and Omar, and only a part of what is likely Sumera’s face. The photo captions mention only the presidential grandchildren’s presence, not Sumera’s.

But photos seen by Rappler show Sumera, wearing an elaborately embroidered blue gown and veil, posing with her children and a government official in front of the presidential seal in Rizal Hall, where the Eid’l Fitr celebration was held.

In other photos, Sumera and her children pose with Duterte himself in Bahay Pangarap, his official Manila residence, after supposedly having dinner with him.

The photos were supposedly taken in early May, a month before the Eid’l Fitr celebration in Malacañang.

Far from having not much to do with Duterte in the past years, Lovelie was in fact active in his presidential campaign and enjoys notable access to him.

Her own cover photo on Facebook shows her onstage with Duterte in a campaign sortie.

Rappler first met Sumera at PDP-Laban’s formal declaration of Duterte as their standard-bearer on November 30, 2016. Sumera and her daughter Isabelle were among the few representatives of Duterte’s family at the event.

Sumera was seen again during the transition period, visiting Duterte at Matina Enclaves in Davao City, where he received high-profile guests before his oath-taking as president.

Sumera brought with her actress Annabelle Rama, supposedly a good friend of hers. Rama is now the talent manager of Isabelle, Sumera’s daughter, who is entering showbiz.

Paolo’s ex-wife is also supposedly among the few recipients of limited edition Duterte watches with a presidential seal.

Yet Duterte and even Paolo have not had flattering things to say about Sumera.

The President distanced himself after reading reports that a supposed daughter-in-law of his was seen visiting the Bureau of Customs.

“It’s an allegation that a daughter-in-law of mine visited Customs. She is not a Duterte,” he had said on August 29.

About his family’s ties with Sumera, he has only “sad” memories.

Paolo eloped with Sumera when he was 18 and she 24, the President said. Duterte was not to lay eyes on his son for years after this.

“One of my sad events in my life because I never saw him for more than 5 years. Until ‘yung nalaman ko na nagkaroon na ako ng apo (I found out I had a grandchild), so I sought him out and made peace with him,” said Duterte.

“Her father is Tausug and the mother is a Maranao. They are the vendors in Davao [selling] jars, ukay-ukay. So he (Paolo) got involved in his wife’s business,” said Duterte on August 23 in Batangas.

Because Paolo had to help with Lovelie’s business, he was often seen in ports, giving rise to suspicions he was involved in smuggling, the President added.

If the jars and ukay-ukay were indeed smuggled by Lovelie’s family, said Duterte, “Give me an accounting and I will resign.”

Sumera and Paolo Duterte separated in 2005. She married an RJ Sumera while he wed January, now a Davao City councilor.

Even Paolo has bemoaned Lovelie’s use of the Duterte name.

After the Resorts World Manila attack in June, reports surfaced that his wife January was in the casino during the tragedy. It turned out, it was Lovelie who was in the casino complex that night, and she claimed she was still Paolo’s wife.

“This would have not happened if she only stopped misrepresenting herself as a Duterte or if she had been decent enough to stop introducing herself as my wife,” wrote Vice Mayor Duterte in his Facebook page.

Sumera responded, calling her ex-husband’s remarks “callous” and regretting how they put her “in a bad light.”

One other difference between Sumera and the First Family is her penchant for showing off lavish spending habits.

Photos seen by Rappler show Sumera with Hermes bags and other luxury items.

But though the Dutertes project an image of keeping simple lifestyles, they have been accused of unexplained wealth. President Duterte and his adult children are alleged to have billions of undeclared wealth in several bank accounts.

Senator Antonio Trillanes IV has also claimed Paolo Duterte and presidential son-in-law Manases Carpio are involved in smuggling and have millions in their bank accounts. – Rappler.com