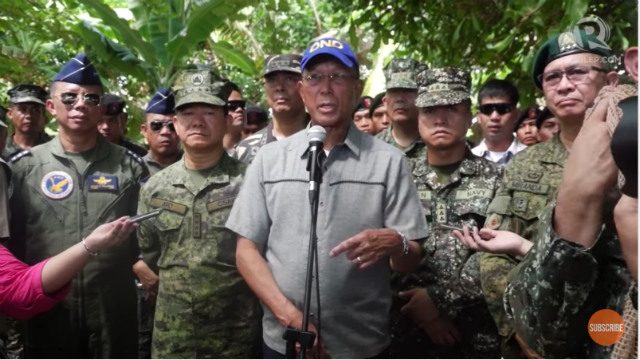 (If there really is something, the defense department and Armed Forces will surely feel it, somebody will report it to us. We have not received any such report. It just appears on social media so I think, that’s fake news.)

Lorenzana said there might be “one or two persons” trying to sow discord by spreading the wrong information.

During the hearing, Trillanes sought to clear his name amid reports he is recruiting members of Philippine Military Academy (PMA) Class of 2006 to join the coup attempt.

Trillanes asked AFP chief Eduardo Año if they have intelligence reports that a politician is actively recruiting for a coup.

The senator said a certain “General Kakilala” is allegedly spreading the information among the military. He was referring to retired Brigader General Joselito Kakilala.

In response, Año said they have not received validated reports that any personality is involved in destabilization plots.

Lorenzana, for his part, said he knows Kakilala but said he has no further information on the issue.

On the coup issue, the DND chief said: “Very remote. Kasi mararamdaman natin ‘yan kung meron (Because we will feel it if there’s something).”

The military earlier denied there are destabilization plots against President Rodrigo Duterte, contrary to the information being spread online by pro-administration groups and personalities. – Rappler.com