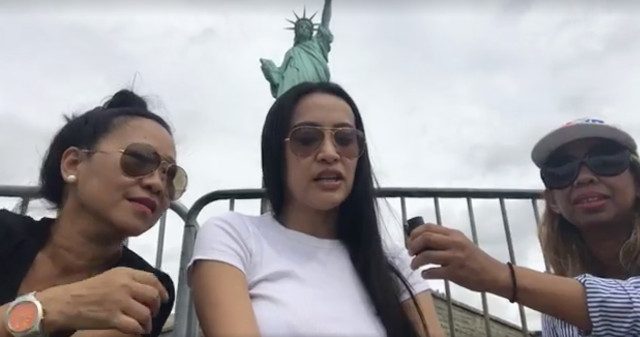 Presidential Communications Assistant Secretary Mocha Uson wasn’t present at her department’s budget hearing on Wednesday, September 20, because she was in New York to attend the United Nations General Assembly.

Her boss, Presidential Communications Operations Office (PCOO) Secretary Martin Andanar, confirmed she was part of the Philippine delegation to the international event in a dwIZ radio interview on Wednesday.

It’s not clear why Uson’s presence was required in New York since President Rodrigo Duterte did not attend the UNGA.

Foreign Secretary Alan Peter Cayetano, who headed the Philippine delegation, also had his own communications staff with him, including supposed Department of Foreign Affairs consultant RJ Nieto who is behind the Thinking Pinoy Facebook account.

Andanar, Uson’s boss, was also not in New York but was in Manila to attend the PCOO’s budget hearing at the Senate on Wednesday, among other events.

Andanar told Rappler that Uson was “requested by Secretary Cayetano to assist him in NYC.”

Cayetano has not replied to Rappler’s request for comment.

True enough, most of Uson’s posts on her Facebook account, which she uses for her work as social media assistant secretary, are of Cayetano’s events at the UN gathering, like his press conferences.

Nieto posted about the same events on social media.

But Uson’s other purpose in New York City was made clear in a Facebook Live video. The video, taken with the famous Statue of Liberty in the background, is of Uson and at least 4 Filipino women who are Duterte supporters.

Uson proceeds to interview each one of them with questions obviously meant to fan flames of support for the President and stir ill feelings toward his critics.

After shouting, “Welcome to New York City!” Uson asks the women for their messages to fellow “DDS” or Diehard Duterte Supporters.

(Don’t let go! Let’s not listen to media and anything negative. If there is negative news, let’s cover it with positive news. Our President is true to us and he loves our country!)

(What’s your message to those destroying the image of the President, those with ambition to run again in 2019 which is why they are making noise now?)

One of the women answers: “Ay mga pulitiko natin diyan, napaka-selfish ninyo! Please lang, tumigil na kayo (You politicians, you are so selfish! Please, stop it). Maawa naman kayo sa bansa natin, sa Presidente namin talaga na (Pity our country and our President who is really) working hard just for the sake of our country and the Filipinos.”

Uson zeroes in on one particularly “noisy” critic of the President’s – Senator Antonio Trillanes IV, who was the primary subject of Duterte’s recent television interview aired on government station PTV-4.

She asks for her companions’ messages for the opposition lawmaker.

One of them tells Trillanes to stop what he’s doing and even warns him of the consequences of his incessant criticism of the Chief Executive.

“Kailangan magtago ka na! Ibalik ka namin sa pinanggalingan mo! (You should hide now! We will return you to where you came from!)” says the woman.

Uson, as assistant secretary, gets a salary of P133,454 monthly from public funds. This includes representation and transportation allowance, extraordinary and miscellaneous funds, and personal economic relief allowance.

As a member of the Philippine delegation to the UNGA, her trip to New York was funded by the government. Like other government employees on a foreign trip, she is entitled to per diem and other trip-related allowances.

During her time as a public official, Uson has been criticized for spreading fake news and for violating a Malacañang order prohibiting government workers from entering casinos. – Rappler.com