Oct 9, 2017 12:50 PM PHT
Rappler.com
Facebook Twitter Copy URL
Copied
Ironically, the event was to mark a 'new era' of ties between the Philippine and Chinese militaries following years of tension over control of the West Philippine Sea 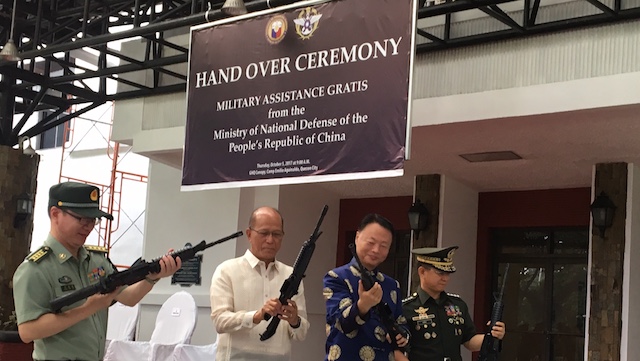 It can get really tricky, to be fair, for a layman who doesn’t know that the official name of Taiwan, the island that broke away from China, is actually Republic of China.

It gets downright controversial when governments fail to make the difference.

The Philippine Department of National Defense (DND) apologized to China on Monday, October 9, for using Taiwan’s logo in an event last week to thank Chinese Ambassador to the Philippines Zhao Jianhua and his country for its latest donation of 3,000 assault rifles.

In a banner hoisted at the venue, the Philippines used the logo of Taiwan’s Ministry of Defense instead of China which donated the rifles. It was worse than the pineapple blooper of the Philippine News Agency (PNA) over the logo of the Department of Labor and Employment (DOLE).

The event was to mark a “new era” of ties between the Philippine and Chinese militaries following years of tension over control of the West Philippine Sea (South China Sea).

Arsenio assured China that the Philippine defense department and the military “adhere to the ‘One China Policy’ as espoused by the Philippine government.” China insists that Taiwan will be reunified with the mainland one day.

What does the incident tell us? The Filipino staff who prepared the banner were not familiar with the logo of China’s Ministry of Defense, but so were the many other officials at the event.

Familiarity takes time, for sure. What’s an unintentional mistake by a new friend, right? Perhaps the boo-boo has taught the Filipinos to use the correct logo when more assault rifles arrive next year.

Watch our report on the handover ceremony below.