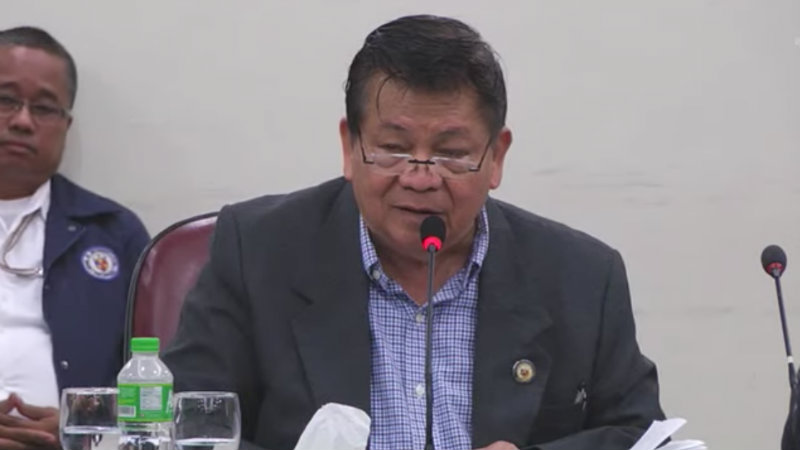 When there are problems within the family, does one raise alarm only within or can a person ask for outside help?

For Leyte 3rd District Representative and former Court of Appeals Justice Vicente Veloso, it should be the former and never the latter.

Veloso was among the legislators who, on October 9, Monday, grilled the Commission on Human Rights (CHR) over reports to the United Nations about apparent human rights abuses in the country. (READ: CHR urges gov’t to reconsider, accept UN call to probe killings)

Veloso used the metaphor of a family in questioning the CHR’s actions.

“Kapag may problema pinag-uusapan sa loob ng pamilya hindi kinakalat sa chismosong kapit-bahay (If there are problems, you discuss it within the family. You don’t tell rumor-mongering neighbors),” he said.

The CHR is a constitutional body that is independent from the 3 co-equal branches of government – the executive, legislative, and judiciary. It is tasked to probe allegations of human rights violations of Filipino citizens. In particular, it focuses on the prevention and investigation of alleged abuses by state actors, including soldiers and police.

“Here you are, part of the Philippine government believing that just because you are independent, you believe that you have the right – the duty in fact – to report to the United Nations if there are violations here. The perceived violations are debatable,” said Veloso.

The CHR’s lawyer Gemma Parojinog explained that their submissions were based on the rules within the convention. A national human rights institution (NHRI) is tasked to protect, monitor, and promote human rights in a county.

The CHR is the Philippines’ NHRI.

But Velasco said he considered the submissions a “discourtesy” to the government.

“Do you think that you have, as an office of the Philippine government, been committing a ground by which your office can be abolished?” asked Velasco.

“With all due respect, we would like to maintain that the office really is an independent office. Probably, it’s hard to understand. But we are just doing our mandate as indicated in this convention,” Parojinog replied.

Velasco ended this part of his questioning by telling the lawyer: “I tell you, baka matuluyan kayo (I’m telling you, you might see your end). We never had this problem before.”

He later questioned Parojinog on whether the CHR conducts visits to jails, noting that the conditions there are “worse” than extrajudicial killings because the living can feel pain while the dead cannot.

The former CA justice would later clarify that he was not saying the CHR should be abolished. “I see the need for the continued existence of the CHR but it needs to be well defined,” he said.

Antipolo City 2nd District Representative Romeo Acop also questioned the CHR’s stand, grilling Parojinog on whether they had the “authority to be the instrumentality of the government representing the state” when it comes to the UN and human rights.

Parojinog said their actions were “in pursuant to the convention which the Philippines has signed and this convention has implemented through the committees created.’

Veloso is vice chairman of the House committee on constitutional amendments. His sub-committee is tasked to tackle proposed amendments to Articles XI (Legislative Department), XIII (Social Justice and Human Rights), XIV (Education, Science and Technology, Arts, Culture and Sports) & XV (The Family) in preparation for the planned shift to a federal form of government.

Article XIII, Section 17 of the Constitution created the CHR as an “independent office.”

The CHR has had a generally rough relationship with this administration, particularly officials from the executive and legislative branches. President Rodrigo Duterte himself has berated the CHR amid criticism of his war on drugs. (READ: ‘Demonizing’ human rights in the first year of Duterte)

The House, during budget deliberations, slashed the Commission’s 2018 budget to a measly P1,000. The move was met with severe criticism both online and offline.

Before the budget was passed, the House eventually decided to restore the CHR’s budget, although cut by over P100 million. – Rappler.com