Martial law in PJs, Trump and Honeylet: Behind the scenes in Malacañang 2017 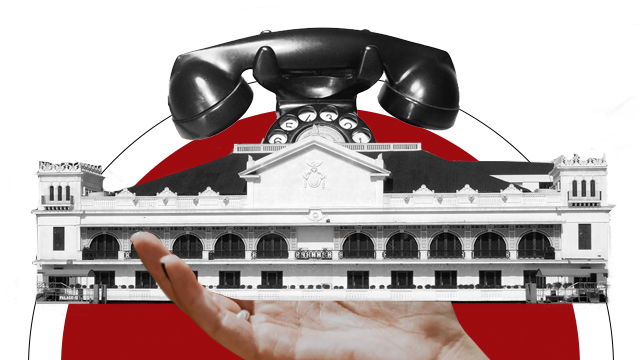 The year 2017 was a tumultuous one for Malacañang – with the declaration of martial law, new controversies arising from the administration’s war against drugs, and President Rodrigo Duterte hosting his biggest ever international event.

But behind the screaming headlines are little side-stories that can now be told. Here are 5 funny, sad, or just plain quirky footnotes to major happenings in President Duterte’s Malacañang in the year 2017. 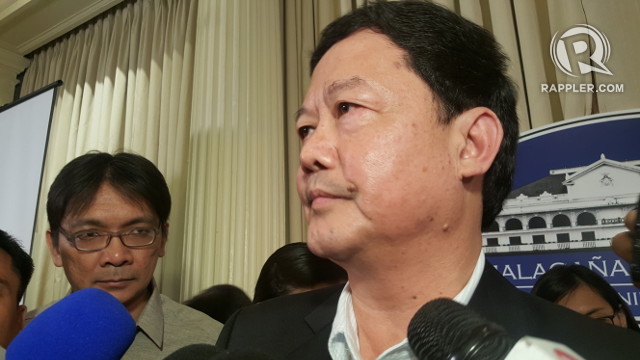 Duterte’s martial law declaration caused a fuss not least because it was declared practically from the other side of the world – in Moscow, Russia. While sleepless government staff were busy packing for the sudden return trip home, who was the unlucky guy who had to pen the actual martial law proclamation?

That lot fell upon Senior Deputy Executive Secretary Menardo Guevarra, the only high-ranking Palace official who was not hurriedly packing bags because he had stayed behind in Manila. In fact, Guevarra was safely in his pajamas, getting ready for bed, when he received a phone call at around 10 pm on Tuesday, May 23, which just happened to be his birthday.

The call was from an unknown number so at first, Guevarra hesitated to answer. In the end, he picked up, and the man on the other end of the line said he was Special Assistant to the President Bong Go and could Guevarra please draft a martial law proclamation covering Mindanao?

Go then handed the phone to President Duterte who gave direct instructions to Guevarra.

Duterte had wanted Guevarra to make the announcement to media that very night. But with the written proclamation critical, it was agreed that then presidential spokesman Ernesto Abella hold a press conference in Moscow instead.

Guevarra, who did not expect to get such instructions at that time of night and on his birthday no less, managed to say yes to the caller. After the call ended, he stood in his bedroom dazed. Then he came to his senses. Was it really Secretary Go who called? The number was unknown to him after all. Perhaps this was just a birthday prank?

Unable to shake off his suspicions, Guevarra called Executive Secretary Salvador Medialdea and asked if Duterte had really given those instructions. Medialdea’s curt reply? “Gawin mo (Do it).” The rest, as they say, is history.

A call among Fukuoka flowers 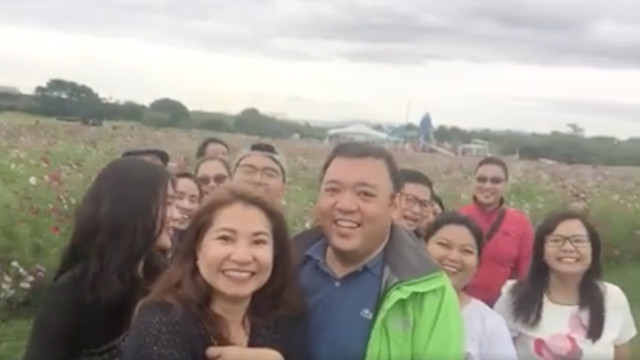 Another call that heralded change in Malacañang was made to then congressman Harry Roque on October 16 as he and some colleagues from his former law office were in Fukuoka, Japan for an outing. While he and his companions were taking selfies among the flowers of a Fukuoka garden, Roque’s cellular phone started to ring.

Roque, upon seeing the name of the caller, immediately shouted for silence. He took the call which reiterated an offer made to him as early as June, or 5 months before: could he become President Duterte’s new spokesman? Finally, after hesitation he had expressed when the offer was first made, Roque said yes to Special Assistant to the President Bong Go. After all, how could he refuse a Chief Executive who months ago phrased his offer this way, “I won’t take no for an answer.” 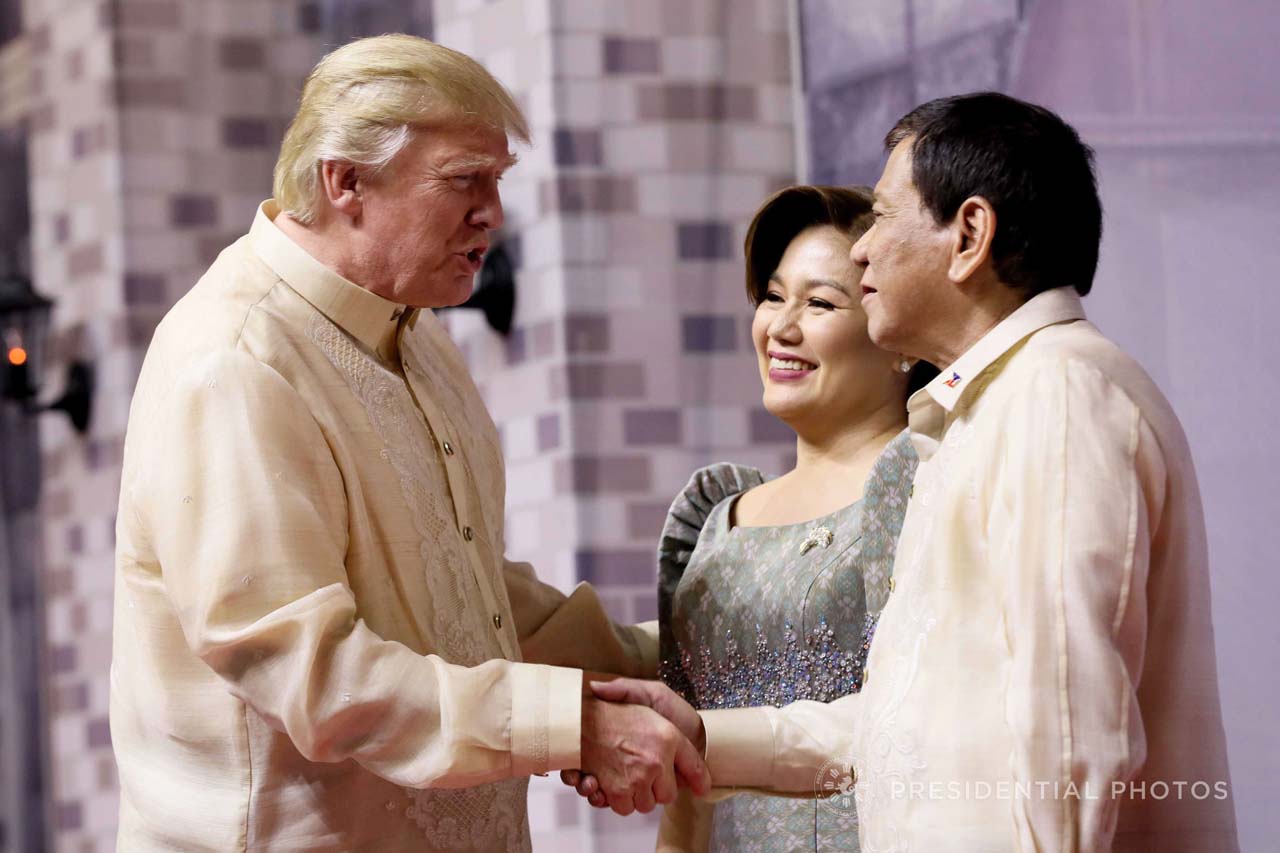 One of the most awaited moments at the Association of Southeast Asian Nations (ASEAN) Gala Dinner was when United States President Donald Trump came face-to-face with Duterte. The time came when Trump, wearing a designer barong, was welcomed by Duterte and partner Honeylet Avanceña at the entrance to the dining hall. (IN PHOTOS: Budding friendship between Trump and Duterte)

With cameras all turned toward the historic meeting, the public got to observe Trump’s extra long (15 seconds, to be exact) handshake with Avanceña and how his other hand lingered upon her butterfly sleeve. Apparently, Duterte noticed this too. Asked afterwards what he thought of Trump’s touchiness with his partner, Duterte joked, “Wala man si Melania. Hindi ako makaganti (Melania wasn’t present so I couldn’t take revenge).”

In another instance, Duterte, reacting to Trump’s gesture, said, he “was greatly honored that Trump shook hands with my partner.”

The Philippine President said he regrets that he “never had the chance to return the compliment” to First Lady Melania Trump.

At the start of 2017, Duterte had already expressed open admiration  for the American First Lady’s beauty. He had said back in January that Trump must be in “heaven” for having a wife like Melania. 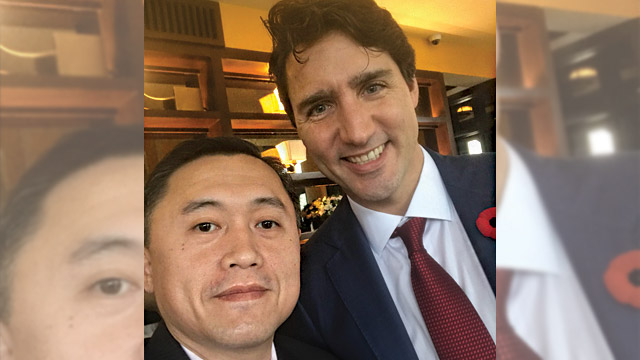 Special Assistant to the President Bong Go is now famous internationally for his penchant for selfies. One time, he told Rappler about the world leader he most fondly recalls having selfies with – Canadian Prime Minister Justin Trudeau.

Go had his first selfie with the Canadian leader during the Asia-Pacific Economic Cooperation Summit in Vietnam. Days later, when Trudeau arrived at the ASEAN Gala Dinner in Manila, he did something Go will always remember.

“Ang galing ng memory niya. Nung nagkita kami sa Maynila, gala dinner sabi niya, ‘You again!’ Nag-selfie ulit kami,” said Go. (His memory is so good. When we saw each other in Manila, at the gala dinner he said, ‘You again!’ So we had another selfie.)

When Trudeau showed up again the next day at the Cultural Center of the Philippines for the plenary session, he saw Go again at the reception area. The extremely friendly leader beat Go to the punch by saying, “Let me do the selfie for us.”

Trudeau was one of the few leaders at the ASEAN Summit who raised concern about the human rights violations in Duterte’s controversial drug war, something the Philippine President took as an insult.

Rock music for a rock-loving president 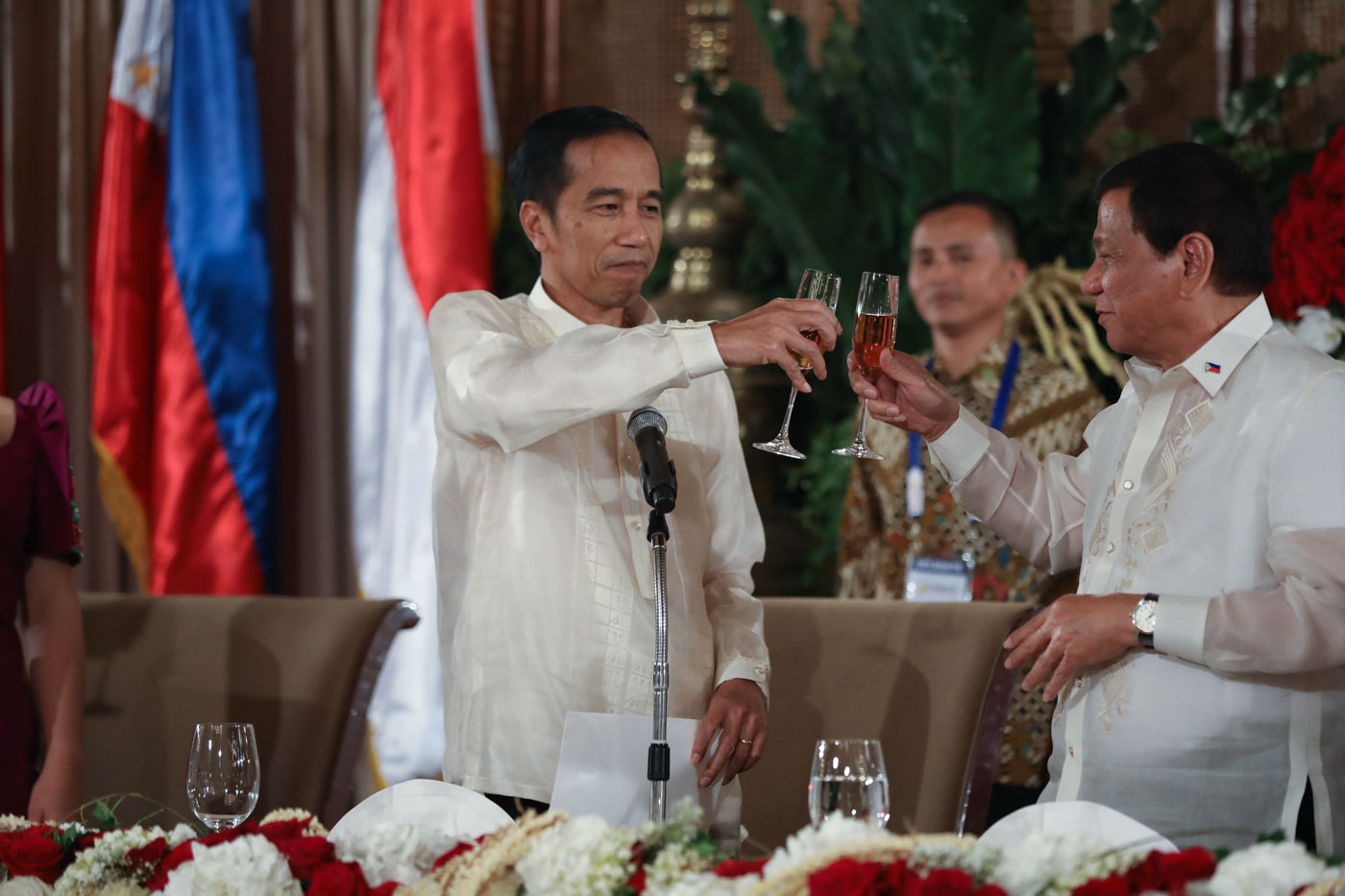 When Indonesia President Joko Widodo made a state visit to the Philippines, the second ever during the Duterte administration, Malacañang made sure to prepare something special for him. In the state banquet held in his honor last April, the Palace tapped violinist Jay Cayuca and The Dawn frontman Jett Pangan to perform more sedate versions of some rock and roll songs.

This was all for the enjoyment of Widodo, a metalhead who has been spotted in many rock concerts, including that of heavy-metal band Metallica.

Aside from tailoring the formal dinner’s music to Jokowi’s musical taste, Malacañang also gifted the Indonesian President with a coffee table book of photographs of him in Manila compiled by Duterte’s close-in photographers.

Duterte and Widodo have cultivated a special rapport together, a rapport that no doubt grew from their striking similarities – both are unapologetically tough on illegal drugs and both were popular local chief executives before rising to the presidency.

By the end of Widodo’s visit, the two Southeast Asian leaders had agreed to work closer together on yet another headache common to both of them: terrorism fueled by Muslim extremism. – Rappler.com