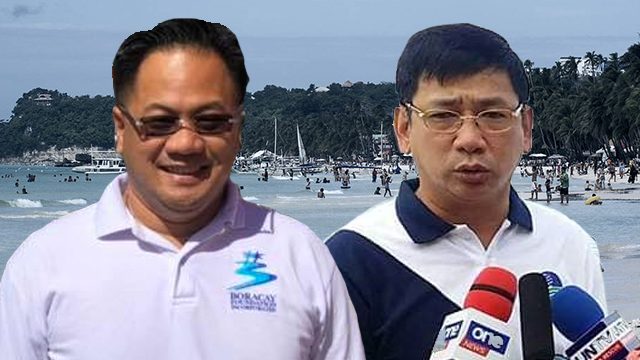 A Singaporean businessman claimed that the Department of Environment and Natural Resources (DENR) is delaying the release of compliance certificates for his travel agency. But is he barking up the wrong tree?

Tay is the general manager of Boracay Adventures Travel & Tours Inc. He is also a board director of the Boracay Foundation and a liaison officer of consul assistance at the Chinese embassy in Manila. (IN GIFs: What to see in the new Boracay)

During the meeting, a dismayed Tay accused the DENR of killing local tour operators because of the proposal that allows tourists to book the activities through hotels. (LIST: 157 Boracay hotels open by October 26)

He also alleged that Antiporda is delaying his travel agency’s compliance certificate – a document that the DENR does not release for this type of business.

“My company is being threatened for the release of the certification [of compliance] for speaking the truth. As a public servant serving the public, there should be courtesy extended and if there are any misunderstanding, proper conversation should be held without humiliating another person,” Tay said in a letter dated Monday, November 5.

Tay claimed that Antiporda tried to intimidate him and “held him by the neck of his shirt” during the confrontation.

The businessman urged the DENR to look into the incident and take necessary actions “against a public servant who abused his power.”

Tay also filed a complaint with the police at the Malay municipal police station against Antiporda.

Barking up the wrong tree?

In a phone interview with Rappler, Antiporda denied that the DENR was delaying the release of the compliance certificates of Tay’s travel agency. He explained that it was the Department of Tourism (DOT) handling travel agency accreditations.

Antiporda said that Tay “humiliated himself” during the November 2 meeting.

(His letter saying that I threatened to hold the release of his ECC? But it’s not with us, because his is a travel agency. The building where he rents might need an ECC. But his business does not.)

Ahead of the meeting, Antiporda said Tay had reached out to DOT Undersecretary Art Boncato for the supposed ban. The environment undersecretary explained that booking watersports activities will “in no way kill local tour operators” because tourists still have the option to arrange it with travel agencies too.

“Sabi ko kay Usec (Boncato), logic lang kako. (I told Usec, it’s only logic.) Coming up with a regulation stopping business? That’s not true. He’s (Tay) trying to be relevant because he has connections in the government,” he said.

Antiporda also denied grabbing Tay by the collar, but he admitted to shoving the businessman and asking him to leave the meeting as tensions rose.

“I told him (Tay), ‘Since you cannot understand, you better get out. You wait for your colleagues to finish discussing then maybe you can understand,'” Antiporda said.

The confrontation came amid talks of allowing some watersport activities by registered operators to open shops by November 7.

Antiporda said Cimatu had just received the letter on Tuesday. Unfazed, he will file a case against the businessman too.

“Kakasuhan ko siya. Sukdulan, kahit matanggal ako, ilalaban ko ang DENR at BIATF (Boracay inter-agency task force),” he said. (I will file charges against him. I don’t care if I get removed from my post, but I will fight for DENR and BIATF.)

Was there an abuse of power? Or a deliberate attempt to use political connections? Perhaps the courts could answer. – Rappler.com