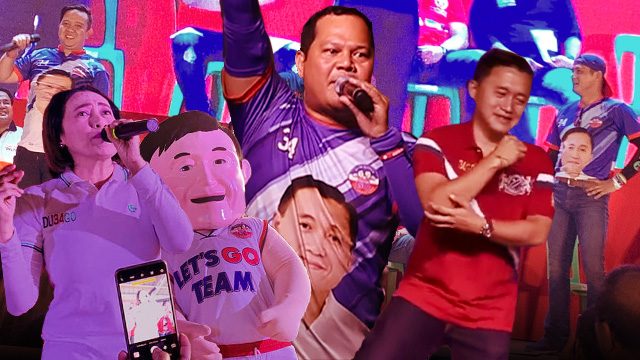 Celebrities as volunteers – that’s how senatorial candidate Bong Go described the stars who either join or represent him in campaign sorties.

Go, who already enjoys the support of President Rodrigo Duterte and other politicians, also relies on showbiz personalities to help boost his chances on the ground.

Asked about it, Go said he does not pay these celebrities, as they are “volunteers.”

(Yes, they volunteer. They believe in me and President Duterte, stars like Robin Padilla. I thank them for their support. We’ll repay them with honest service.)

In the last two weeks of the campaign, it seems Go has gone full force with his use of entertainment for his Senate bid.

Last Friday, May 3, in Pampanga, Go brought Moymoy of comic duo Moymoy Palaboy to replace Salvador who couldn’t make it.

The following day, in a sortie in Cainta, Go sent Comedy Queen Ai-Ai delas Alas to represent him. Go, however, did not answer when asked if the comedienne also offered her services for free.

Just when you think you’ve seen it all, Go also brought out his mascot, which became Delas Alas’ dancing partner onstage.

On Sunday, Go brought child star Alonzo Muhlach, son of Niño Muhlach, to Mandaluyong City, where the boy sang and danced for the public. Alonzo even made Go and other senatorial and local bets join him.

Also joining them was comedian and singer Bayani Agbayani, who sang Go’s campaign jingle. Agbayani performed it live for the audience.

With only a week left before the elections, will other “volunteers” join Go in his last push to court votes? – Rappler.com