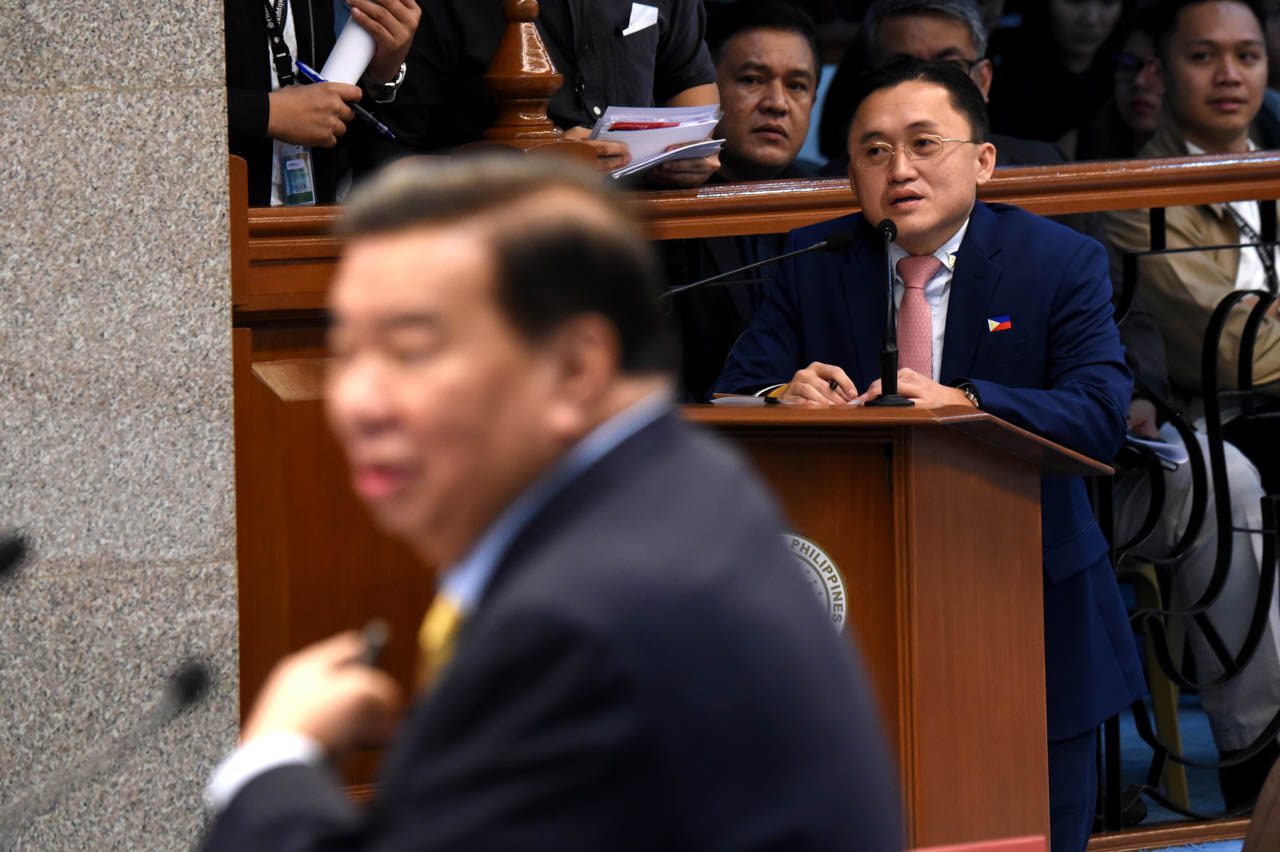 Facebook Twitter Copy URL
Copied
'Being a neophyte senator, he may not be aware of our tradition and our rules,' says Senate Minority Leader Franklin Drilon, a 4-time Senate president

Neophyte senator Christopher “Bong” Go’s lack of experience in the legislative showed, as he accused Senate Minority Leader Franklin Drilon of having a political agenda by filing resolutions seeking to allow ABS-CBN to operate past its franchise expiry on May 4.

Speaking to reporters, Go was asked what he thinks about the concurrent resolution filed by Drilon on Wednesday, February 26. The Drilon resolution urges the Senate to convey its sentiments on allowing ABS-CBN to continue operations pending its franchise renewal.

“It will be superfluous. It will not supersede an existing law,” Go said.

But what Go seemed to find disagreeable with the resolution is that a concurrent resolution, if adopted by the chamber, doesn’t need the signature of the President. (READ: Scenarios: What’s next for ABS-CBN’s franchise after Senate hearing?)

In ABS-CBN’s case, the concurrent resolution, if adopted, would send a signal to the National Telecommunications Commission (NTC) that the Senate is green-lighting its operations after May 4. It can be used as NTC’s basis for providing the network with a temporary permit to operate.

Go also turned out to be confused with the legislative lingo when he mixed up the concurrent resolution with the pending bill.

Go further speculated that the joint resolution – one that needs the signature of the President as it has the effect of law when approved – reeks of politicking as Drilon sought to extend the ABS-CBN franchise until December 31, 2022.

Drilon, in a separate interview on Wednesday,  said he “regrets” Go’s statements.

“Being a neophyte senator, he may not be aware of our tradition and our rules. Precisely a concurrent resolution does not go through the President because it has no force and effect of a law. It is just a sense of the Senate,” the 4-time Senate president said.

“There is no politics here. We are not depriving the President of the right to veto or approve. The right to veto or approve is in the joint resolution that we filed, which has the force and effect of a law and which is also filed in the House of Representatives,” Drilon said, referring to the House joint resolution filed by Cebu congressman Raul del Mar.

The neophyte senator also seemed to have forgotten that it was the Department of Justice (DOJ) that suggested the passage of a concurrent resolution. But Go still cited the DOJ’s principle of equity, along with NTC and Senate President Vicente Sotto III’s statements, as reasons why a resolution was not necessary.

“Unang-una wala naman po nagsasabi na mag-off air ang ABS ‘pag nag-expire ang kanilang franchise. (Firstly, nobody said ABS will be off air when their franchise expires.) The NTC, DOJ, and even SP (Sotto) said provisional authority can be granted while the franchise bill is pending in Congress,” Go said.

The same view is shared by Senator Grace Poe, the chairman of the Senate public services committee, and House Speaker Alan Peter Cayetano.

“May legal basis kung sakaling magpatuloy ang isang network (There’s legal basis for the network to continue operating) while the renewal of the franchise is pending,” Go added, saying there is precedent with the case of the Catholic Bishops’ Conference of the Philippines.

But even experts have debated whether there is legal basis for ABS-CBN to operate beyond the expiration of its franchise. Retired chief justice Renato Puno disagrees that ABS-CBN can. (READ: What are legal grounds for ABS-CBN to air after May 4?) – Rappler.com