‘Lord’ Alan Peter Cayetano? Speaker has painting of lawmakers praying over him 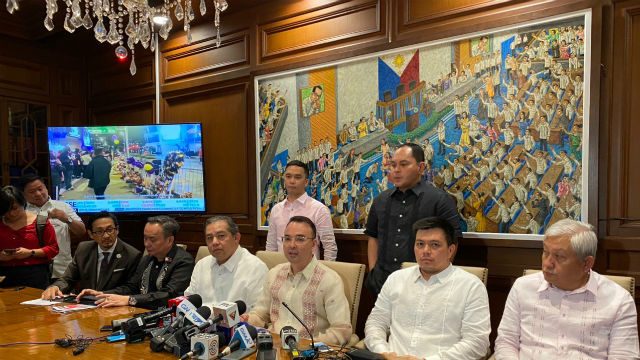 It seems Speaker Alan Peter Cayetano loves being prayed over so much, he has a huge painting of it hanging inside his office.

The mural, painted by artist Peter Abordo in 2019, is the centerpiece of the Speaker’s office at the Batasang Pambansa.

It depicts an actual scene that happened on July 22, 2019 after Cayetano won the heated battle for the speakership.

Upon clinching the 266 votes that officially made him the Speaker, Cayetano kneeled in front of the vast plenary hall as the other legislators were asked to pray over him.

The painting captured this so well, with Cayetano’s bowed faced flashed on the two screens in front of the hall. Cayetano has since accused Velasco of allegedly ousting him, but the Marinduque congressman has denied this. After all, Velasco does not have the numbers in the House, where Cayetano has been showering lawmakers with hefty budget allocations and key House posts since he became the Speaker.

Multiple House insiders told Rappler Cayetano is now “maneuvering” to use this alleged failed coup to scrap his term-sharing agreement with Velasco. – Rappler.com