Facebook Twitter Copy URL
Copied
'Everything is possible' in politics, says the Vice President, who came to a Kapisanan ng mga Brodkaster ng Pilipinas event where the popular senator was a guest

Was it a coincidence or part of preparations for Vice President Jejomar Binay’s presidential bid in 2016?

While Senator Grace Poe was a guest at a top-level gathering of the Kapisanan ng mga Brodkaster ng Pilipinas (KBP) in Cavite, the Vice President arrived at the event, where he was not originally invited on Thursday, November 13.

“We didn’t know,” was the answer of Binay’s spokesman for political affairs, Cavite Governor Juanito Victor Remulla, when a reporter asked if, as the Vice President claimed, their meeting at the event was really a coincidence. 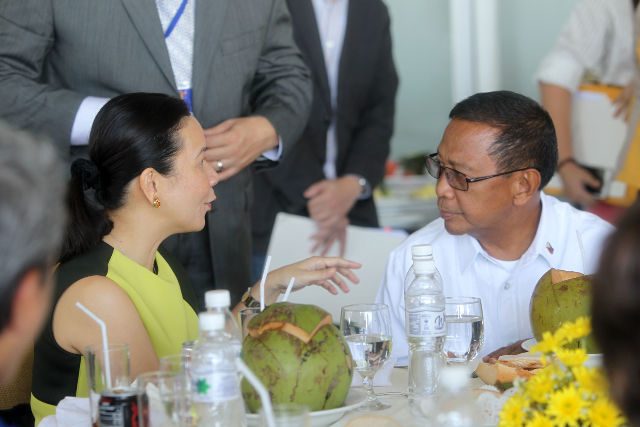 Binay explained he dropped by the KBP event in Tagaytay to make a formal apology after he backed out of a “debate” he himself proposed. The broadcasters’ association was supposed to organize the debate.

“I hope I will not be treated like a gatecrasher here. I’m not part of the program,” Binay later told reporters. It was the Cavite governor who set up Binay’s impromptu visit. The Vice President was in Cavite Thursday for a two-day tour of the towns.

Binay tried to downplay the “coincidence” of him and Poe being in the same event. “Sabi ko na nga ba ‘yan ang magiging headline bukas (I knew this would be tomorrow’s headline),” he said.

Still, he admitted he was open to possibly teaming up with Poe in 2016. “Alam mo naman sa pulitika (You know in politics), everything is possible,” he said.

Despite plunder raps against him and a 3-man Senate blue ribbon subcommittee investigating corruption allegations against him, Binay remains the top contender for the 2016 polls. Poe, meanwhile, is the top pick for vice president based on the same survey.

It’s been an interesting two days for the neophyte senator. The day prior, a Liberal Party member said they were eyeing Poe as Interior Secretary Manuel Roxas II’s running mate in 2016.

Poe, in several interviews, has made it clear that she is not gunning for the presidency in 2016.

Binay was the head of the united opposition, which backed the presidential candidacy of Poe’s father, actor Fernando Poe Jr, in 2004. – Rappler.com