Who plans to raise citizenship issue vs Grace Poe? 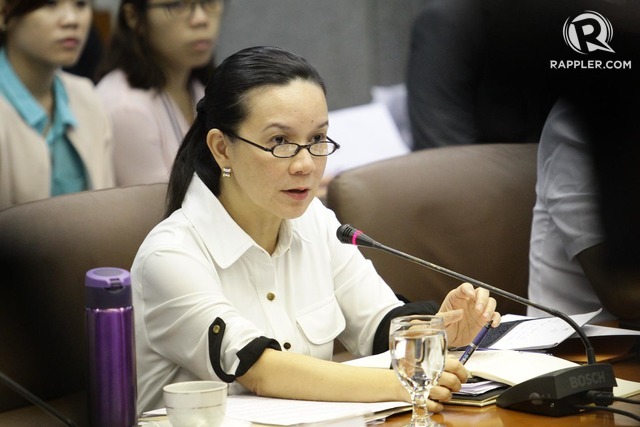 MANILA, Philippines – We saw this coming, and indeed political camps that are threatened by Senator Grace Poe’s good showing in presidential preferences surveys are exploring the idea: what if they raise questions about her citizenship, therefore her fitness for the presidency?

And you read that right: camps, plural. We heard that lawyers supportive of Vice President Jojo Binay and Interior Secretary Mar Roxas are separately preparing cases to raise the possibility that Poe is not a natural-born Filipino, a requirement in the Constitution for the president of the Philippines.

This is ironic since both presidential aspirants, acknowledging Poe’s potential to draw votes, have expressed openness to having her as running mate. Binay said “everything is possible” when he attended a gathering with Poe last November, while Roxas has initiated at least two meetings to convince Poe to run under the banner of his Liberal Party.

“In case the talks falter,” one source said.

In the latest Pulse Asia survey, conducted March 2015, Poe ranked 2nd in the respondents’ choice for president, with a net rating of 14%, next to Binay’s 29%; Roxas was 7th with 4%. (READ ALSO: Even with Aquino endorsement, more prefer Poe than Roxas)

In the vice presidential poll, Poe was Number 1 with 29% net preference rating, followed by Senator Francis Escudero, who is her family’s friend, with 16%.

Poe, as widely known, is a foundling in Iloilo, later adopted by actors Fernando Poe Jr and Susan Roces. Her camp used this fact to gain sympathy votes in the 2013 senatorial campaign by turning it into a TV drama episode.

“The definition of a natural born citizen presumes that at least one natural parent is a Filipino. We cannot presume that in her case,” a lawyer said.

“A foundling just adopts the citizenship of the parents. The real parents are not known, especially in her case, where her looks can have a different racial origin.”

A blog by journalist Ellen Tordesillas says Poe’s camp is prepared to answer in the event the issue is brought before the courts.

In 2004, when Grace Poe’s father ran against President Gloria Macapagal Arroyo, his citizenship was also questioned. According to complainants, Fernando Poe Jr was an illegitimate child (he was born before his parents were married), and therefore took the citizenship of his American mother. The Supreme Court ruled in FPJ’s favor, saying that when his father acknowledged paternity, Fernando Poe automatically assumed the citizenship of his father, a Filipino.

In an interview with Philippine Star columnist Bianca Gonzalez, Grace Poe admitted she was also curious to know who her biological parents were, but didn’t think anybody was interested to show up anytime, even during the 2013 campaign, when she was very visible. – Rappler.com