No politics? Duterte uses weekly ‘Talk to the People’ to promote 2022 bets His allies say he’s too busy running the country to be thinking about 2022 elections now. But 2022 politics is very much on President Rodrigo Duterte’s mind, even during his weekly public addresses that are supposed to be about the raging COVID-19 pandemic.

In his two most recent “Talk to the People” speeches, Duterte openly spoke of his wish for two Cabinet members – Transportation Secretary Arthur Tugade and Public Works Secretary Mark Villar – to run in the 2022 senatorial elections.

The two officials were even the first two resource persons to speak during two separate “Talk to the People” airings and were given ample time to highlight their achievements as Cabinet members – never mind that their portfolio had little to do with the health crisis most Filipinos wanted to hear about. 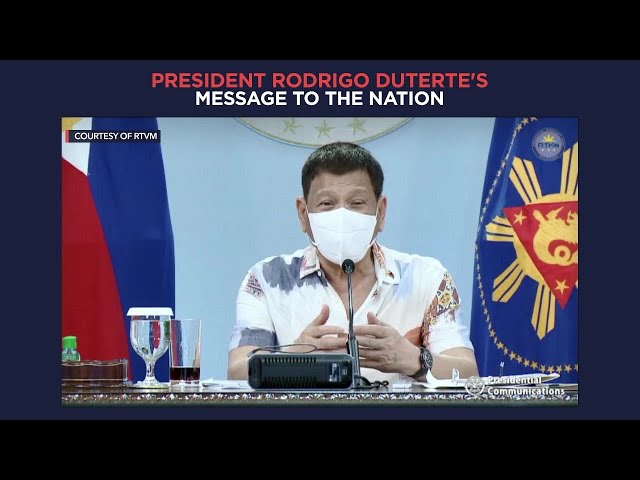 In the most recent “Talk to the People,” aired on Monday, August 2, Villar was the star. A staggering 40 minutes (38% of a 105-minute airing) was devoted to his presentation on roads, bridges, and classrooms built during the Duterte presidency.

At the end of his presentation, Duterte profusely praised him and, without missing a beat, brought up the 2022 polls.

(I will feel sad if you run for senator and win. The executive department will lose someone like you.)

In the July 28 “Talk to the People,” Duterte turned the spotlight on Tugade, saying almost exactly the same thing after the Cabinet official’s lengthy presentation.

“I hope that you’d consider running for senator of the Republic of the Philippines. Sayang ka, sayang ka. Totoo, nanghinayang ako sa inyo,” said the President.

Both Tugade and Villar took up the first part of the televised meeting. The reports of Health Secretary Francisco Duque III, vaccine czar Carlito Galvez Jr., and Food and Drug Administration chief Eric Domingo were taken up in a latter part of the meeting.

This is despite the problem that most Filipinos are concerned about: the feared Delta variant of COVID-19, which is the biggest crisis facing the country and the reason behind the 15-day lockdown of the capital region that begins on August 6.

Yet another head-scratcher is the recent addition of Chief Presidential Legal Counsel Salvador Panelo to the lineup of government officials asked to speak during these pandemic-related meetings.

Panelo is now often the last speaker at these meetings, sharing his thoughts on everything from the need to restore the Ifugao rice terraces to the International Criminal Court, topics unrelated to the health crisis.

“Brilliant, senator,” Duterte once quipped as Panelo was again defending him in relation to a possible ICC probe.

Panelo also often talks about his trips to various parts of the country, meeting with local government officials even if the government itselfdiscourages non-essential trips during the pandemic. He even supposedly promised vaccines for Sagada in a recent trip there. Panelo told Rappler he merely relayed to Galvez the request of Sagada officials for vaccines for their tourism workers.

Other officials seen to be eyeing a 2022 electoral bid who are also prominently featured in these “Talk to the People” episodes are Senator Bong Go, Presidential Spokesman Harry Roque, and Cabinet Secretary Karlo Nograles.

Go, in particular, sticks out because he is the lone lawmaker in a room full of Cabinet members or executive branch officials. The official line is that he is there in his capacity as chair of the Senate committee on health. However, his House counterpart, the House committee on health chairperson Quezon Representative Angelina Tan, has never attended these meetings.

Duterte’s party, the ruling PDP-Laban, is considering Tugade, Villar, Panelo, Roque, and Nograles for its 2022 senatorial slate. Duterte himself has floated Go as a presidential candidate.

As the nation braces itself for a possible Delta variant-driven surge, can it depend on the President to stay focused or will politics again mar the government’s crisis messaging? – Rappler.com