Imee rallies support for a 'Marcos in the Senate' in 2019 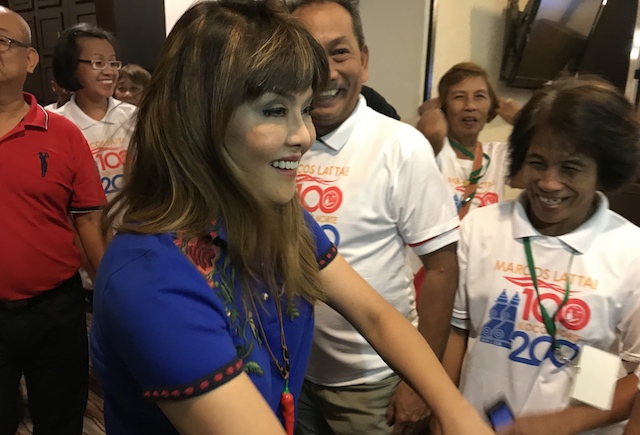 As early as a year ahead of the 2019 midterm elections, Ilocos Norte Governor Imee Marcos has asked barangay officials of Cagayan province to support "a Marcos" in case one of them runs for senator next year.

Addressing more than 700 officials at the 15th Liga ng Mga Barangay-Cagayan Congress in Clark, Pampanga, Marcos said a family member "may be forced" to run for national office due to the "slow-moving" petition of her brother Bongbong Marcos before the Presidential Electoral Tribunal (PET).

"Dahil sa protesta ni Bongbong na napakatagal, baka mapilitan ‘yung isa sa amin na tumakbo para sa national office (Because of the protest of Bongbong which is taking such a long time, one of us may be forced to run for national office)," Marcos said.

Bongbong has contested the result of the vice presidential election in 2016, claiming the winner, Vice President Leni Robredo, cheated him of victory.

The governor also relayed to the barangay officials the supposed statement of former Senate President Juan Ponce Enrile that Ilocanos must come together once again to elect a senator from the North.

The "Solid North" – composed of the regions of Ilocos, Cordillera, and Cagayan Valley – had been one of the known strongholds of the Marcoses.

"Sabi nga ni Manong Johnny (Enrile), wala ng representative ang Amianan. Eto nga, in case, magpapatulong  na lang ako sa inyo, at charity begins at home. Malapit naman kayo sa amin (As Manong Johnny said, the North no longer has a representative. So here, in case, I'll ask for your help, as charity begins at home. You're not far from us)," she said.

The governor said the problems of Ilocanos would be solved if they have a representative in the Senate.

(Let's help each other, whether in politics, in the price [of rice], election problems, traffic in Tuguegarao to the Solana bridge, all the infrastructure that have not started because [there's no] Ilocano in the Senate.)

Marcos was earlier seen at the Panagbenga Festival parade with brother Bongbong, and were evern allowed to address the crowd. Baguio residents criticized their mayor for allowing the annual festival to be used for politicking. – Rappler.com