The loyal supporters of Junjun Binay 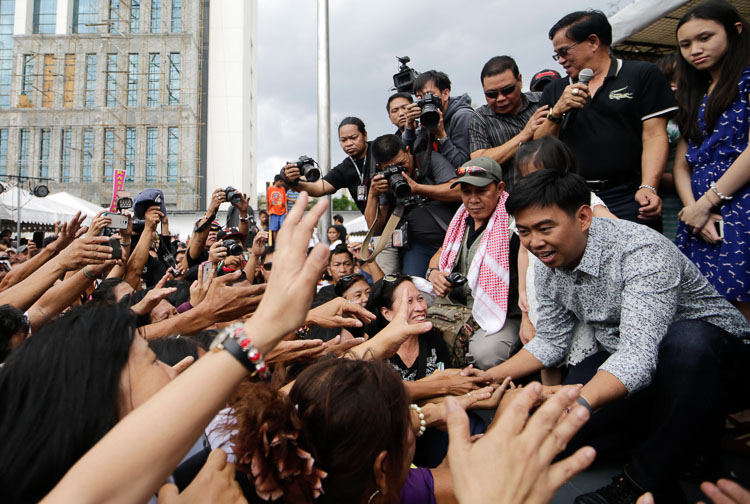 Makati City Mayor Jejomar Erwin 'Junjun' Binay greets his supporters after he a TRO from the Court of Appeals blocking the suspension order from the Ombudsman on March 16, 2015.

MANILA, Philippines – When Makati Mayor Junjun Binay is in the news – as he was in the past month – the crowds would follow. The white tents would go up, chairs distributed, and the stage set for an afternoon of revelry and a show of defiance.

One would think that Makati City Hall was not a government office during these last couple of weeks, a situation that began in mid-March because of the Ombudsman’s order to suspend Binay in connection with an allegedly overpriced city building.

Binay had been defiant, holing up in his office while he waited for a court order stopping his suspension. Meanwhile, hundreds of his supporters filled the quadrangle day after day.

They have done this for two weeks, as they did in January, when Binay was arrested after being cited for contempt by the Senate blue ribbon committee. They claim to support Binay, to stand guard over him, to cheer for him and to jeer at the other government officials who tried to enforce orders against the mayor.

When it defended the validity of its suspension order against Binay, the Ombudsman also denounced "the alarming practice of suspended public officials encouraging the massing of people who obstruct or hinder the proper exercise of the functions of the Office." In other words, the time-honored political tradition of hakot crowds.

Some Makati residents told Rappler that this "encouragement" to gather at the city hall came in the form of money, and that it has been an open secret in some barangays.

Some so-called supporters have been "invited" to attend the rallies for an "allowance" of P300. Their transportation and meals were provided. The only thing they needed to do? Show up and sign an attendance sheet, then receive their allowance afterwards.

This has happened as early as January, when Binay was arrested and brought to the Senate. His supporters were fetched by a bus and also brought there from Makati, Rappler was told.

The recipients already had an understanding of where the money came from. A leader, who organizes the group and facilitates the release of the allowance, even gets a cut from the original amount of P500 per supporter.

Another Makati resident had a similar tale: 12 hours' stay at the city hall was worth P300, while P500 paid for the full 24 hours. 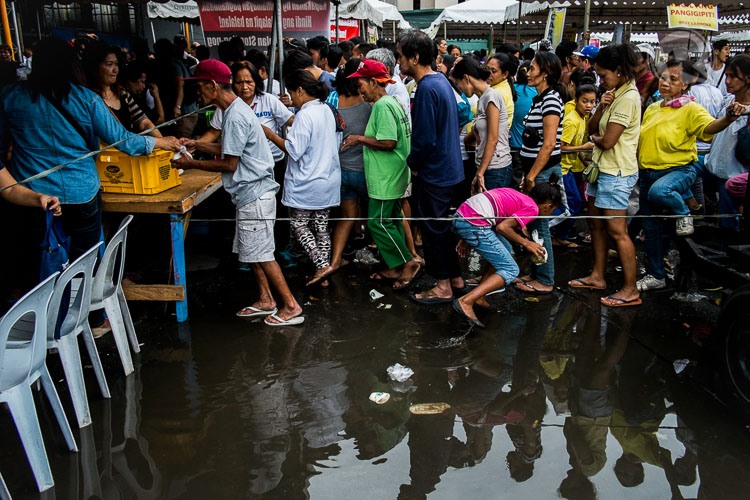 LUNCH. A long line of supporters get free meals courtesy of organizations and individuals backing Binay.

Binay’s supporters have rallied behind their beloved mayor twice so far this year. In both instances, the events have unfolded in a similar template. Binay would resist the order, saying that he would exhaust all legal remedies to correct what his camp considered the latest political attack against the 2016 presidential bid of the Binay patriarch, Vice President Jejomar Binay. Meanwhile, his supporters would camp out at the quadrangle.

The white tents went up early in the morning, prepared to house different barangays. Then the people came. The crowd can get territorial – a heated argument once broke out because a group had helped themselves to another barangay’s allocated number of chairs.

To keep the crowds pacified and entertained, song and dance numbers were performed on stage. Announcers cut in sometimes to lead the crowd in a chant. "Binay for 2016! No to Operation Nog-Nog! Kay Binay kami!"

The early birds got their morning coffee and pandesal, their first free meal of the day. Lunch was served later. Every day, empty boxes (sometimes Jollibee, sometimes McDonald’s) littered the grounds.

The crowd became a little more animated when they sense that something was about to happen. On the day the suspension was served, the mood was tense: the main entrance of the city hall was shut down, limiting access to a small side door. Police started to surround the area, an act Binay later said was "overkill." Access by elevator to Binay’s office was limited to media and some city officials. Some supporters were even posted on the stairs of the fire escape.

The tension in the city has somewhat subsided since the court stopped Binay's suspension, but it has not disappeared entirely, especially with another man claiming to be mayor.

A leadership standoff still continues between Binay and his vice mayor, Romulo Peña, who had been sworn in as acting mayor and now insists on being recognized as the lawful leader of the city. 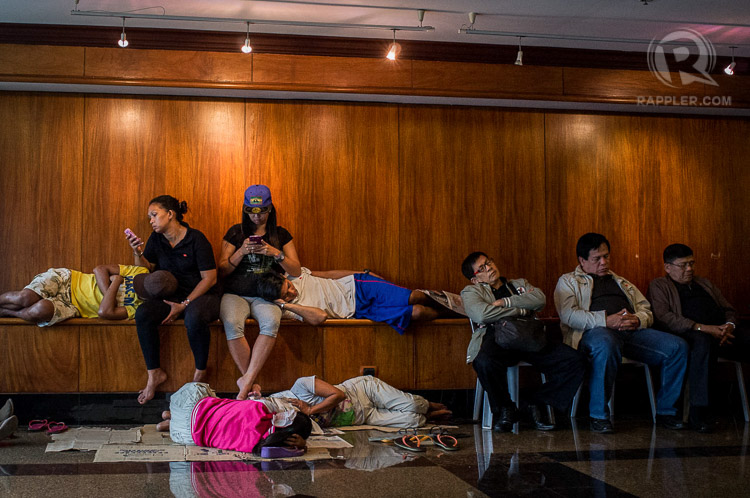 FOR THE MAYOR. Tired supporters sleep at the lobby of the mayor's office on the 21st floor.

Both officials have tried to assert their leadership claims by signing documents and convening meetings. Peña held a command conference with Makati police, while Binay received declarations of support from various sectors and vendors’ associations. City councillors have also rallied behind Binay.

The Makati mayor has said that it’s business as usual in the Philippines’ richest city. The main entrance has been reopened, and transactions are ongoing.

But the Court of Appeals has yet to resolve the leadership issue, and Peña is holding office in the old city hall building. The crowds may be gone from the quadrangle, but some still remain inside the city hall lobby – signs that the city is still far from being back to normal. – Rappler.com