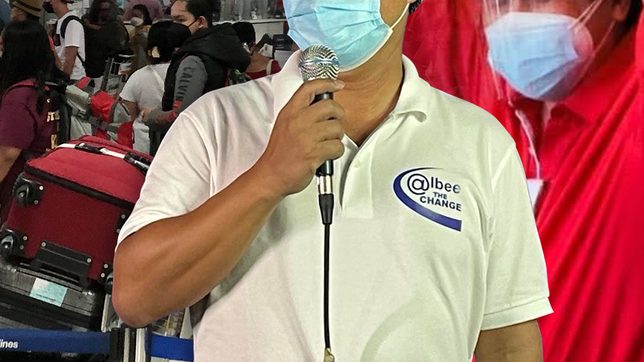 Facebook Twitter Copy URL
Copied
It doesn’t help the mayoral candidacy of Albee Benitez. Bacolod’s professional demographics, the ones touted as having abandoned Mayor Leonardia for Benitez, are the ones who’ve made the loudest noises over the S-Pass debacle.

There’s a big elephant in the room that’s not being mentioned while the governments of Negros Occidental province and its chartered city capital, Bacolod, engage in a word war over contradictory travel policies.

Iloilo City and Iloilo province, Guimaras, Antique, Capiz, and Aklan on Panay island have coordinated to streamline policies on movement of people and goods. The failure of the Negros Occidental and Bacolod local government units to do the same has left hundreds of fully-vaccinated passengers in the capital’s airports begging for permission to fly.

Barely three kilometers separate the city government center and the provincial capitol. Yet, provincial and city officials act like there are mountains in between their turfs. Think of feudal fiefdoms with no modern communications equipment.

The problem revolves around the S-Pass (Safe, Swift, Smart Passage), the primary contact tracing system for travel managed by the Department of Science and Technology Bacolod.

Only air travelers are burdened with this requirement, and this mode of travel is what connects both political entities to the national government and the big investors needed to spur economic recovery.

A frustrated officer of the local commerce of industry told Rappler, “This is a pissing contest and it’s hurting the business community, especially our badly-hit travel sector.”

The businessman asked for anonymity as he is one of those trying to bridge the gap between province and city. A friend to politicians on both sides, he described the controversy as “unwanted, unneeded.”

There are pros and cons to the lifting of the S-PASS requirement. But many here believe these have little to do with controversy, otherwise both sides would have already sat down to thresh out issues and find a middle-ground.

“Why don’t you just mention the elephant in the room?” the businessman challenged.

The city and the province haven’t always been at loggerheads. The May 2022 election in Bacolod City probably best explains the new bellicose attitude on both sides.

Benitez has so far won challenges to his change of voter residency, filed by people linked to Leonardia’s administration.

Before he filed his certificate of candidacy, journalists were amused by the slew of noisy endorsements for his mayoralty run – by officials of the provincial government, congress representatives from the province’s districts, mayors, and local councils.

The tension peaked during the registration period for new voters. Bacolod’s Comelec office and satellite centers saw chaotic days in the last month of this period. Leonardia’s camp claimed – with little proof and no small amount of hysteria – that the deluge of new voters or transferees was being orchestrated by outside politicians linked to Benitez.

That charge was met with angry rebuttals by provincial administrator Rayfrando Diaz.

Benitez has also taken potshots at the city’s handling of the COVID-19 pandemic, an area where he got some sympathy from frustrated Bacolod residents.

His slate made a strong point by sending proxies to file COCs, to prevent a crush of supporters that could become a superspreader event.

Leonardia’s camp ignored Benitez’ move and paid the price for it with residents heckling a street parade by hundreds of the mayor’s supporters. Leonardia’s representatives told Rappler they did not organize the event.

Word wars are one thing. Actions that actually derail the movement of people are another.

The EO paper trail is clear; the Bacolod issuance was hailed by residents.

The province notes that it would be hard to differentiate between Bacolod and province-bound folks.  But there are already two separate halls for them at the Silay-Bacolod airport.

Besides, the major ports in Negros Occidental, located in Bacolod City, do not have this problem. The only requirements checked by the city are negative Reverse Transcription Polymerase Chain Reaction (RT-PCR) test results, whether travelers are headed for the city of the province. Neither do any of the province’s towns and cities have checkpoints to ask for the S-Pass.

Negros Occidental is within its rights to demand S-Pass for residents and travelers to its cities and municipalities. But to rope in Bacolod residents and visitors is seen as heavy-handed, as comments in various radio news shows indicate. It doesn’t help the candidacy of Benitez, who has served as economic adviser for the province since ending his term in Congress.

That’s a pity since the city’s professional demographics, the ones touted as having abandoned Leonardia for Benitez, are the ones who’ve made the loudest noises over the S-Pass debacle. – Rappler.com