Presidential candidate Vice President Leni Robredo arrives at the Sofitel Philippine Plaza for the Pilipinas Debates 2022: The Turning Point on Sunday, April 3. Robredo’s daughters, Aika and Tricia, and her team, join her before she goes on stage with the other candidates for the second instalment of the presidential debate organized by the Commission on Elections (Comelec) (VP Leni Media Bureau)

Have you ever seen Vice President Leni Robredo wince in utter disgust over a false claim made against her?

If you haven’t, watch the video below, where she responds to the allegation of Ferdinand Marcos Jr.’s spokesperson that her camp supposedly “planted” people in a Marcos rally to tell the media that they were paid to be there.

Robredo fired her shot at Marcos Jr. for his camp’s latest lies about her when asked about it in a chance interview after the second Commission on Elections debate for presidential bets on Sunday, April 3.

(That’s really too much. Of all people, we’re supposed to be the ones giving money? He’s the one with that kind of record, not us.) 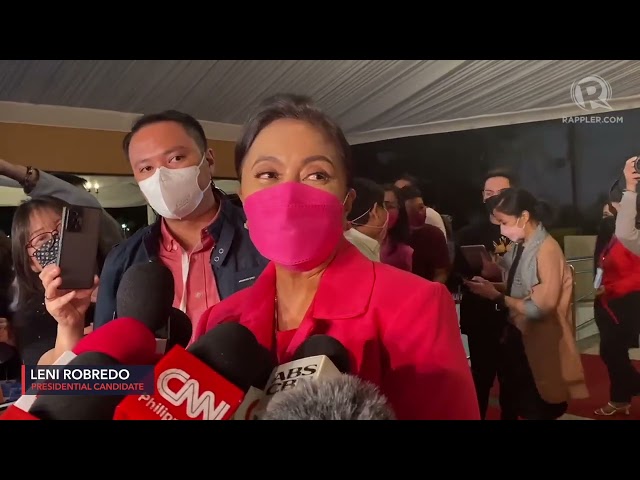 In Tarlac, ABS-CBN was able to interview attendees who admitted they went to the Marcos Jr.-Duterte tandem’s rally in exchange for P500.

Sought for comment, Marcos’ spokesperson Vic Rodriguez claimed that the interviewee was “planted by the yellows,” referring to the campaign color of the once-ruling Liberal Party (LP). Robredo chairs LP, but decided to run as an independent presidential bet to be seen as a more unifying figure in the 2022 elections.

Despite the show of force of supporters in her rallies across provinces, Robredo remains a distant second placer in pre-election surveys, which Marcos Jr. continues to dominate.

The late dictator’s son has sustained his wide lead over all other presidential contenders. Fact-checks done by fact-checking initiative Tsek.PH since the start of January 2022 showed that Robredo has been the top target of disinformation, which in turns benefits Marcos Jr. (READ: LIST: Bongbong Marcos’ false claims about Martial Law on ‘Toni Talks’)

His father, the late dictator Ferdinand Marcos, was deposed in the bloodless 1986 EDSA People Power Revolution, ending over 20 years of tyranny marked by corruption and human rights abuses. But the Marcoses have successfully returned to politics since then, using their money and machinery in their bid to revise history and sanitize their image through disinformation networks online. – Rappler.com