Robredo gets rockstar welcome in Sorsogon, but still no endorsement from Escudero Facebook Twitter Copy URL
Copied
What happens when a guest candidate hosts a presidential bet in his bailiwick? Definitely not a clear endorsement. 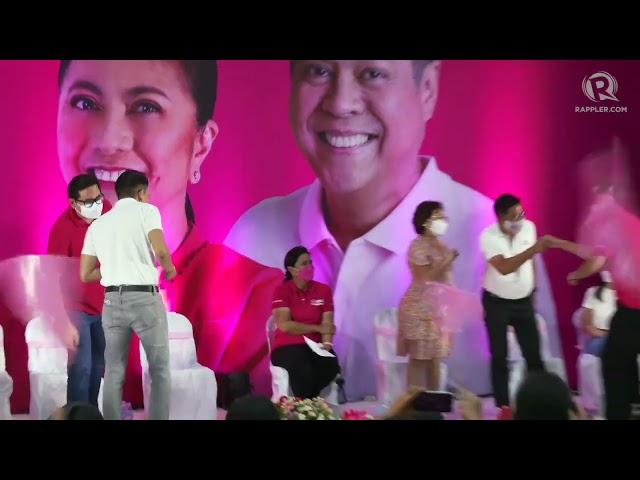 Sorsogon Governor and now senatorial candidate Francis “Chiz” Escudero and the eager “Kakampinks” from the province pulled out all the stops to welcome presidential bet Leni Robredo.

Despite throwing a full production to welcome Vice President Robredo on Wednesday, February 9, Escudero still did not endorse the sole Bicolana presidential bet who had included him as a guest candidate in her Senate slate.

There was a huge crowd waiting for Robredo inside the Sorsogon Provincial Gymnasium a day after she officially kicked off her campaign. It was a sea of pink – from the shirts of the supporters seated on the monobloc chairs and bleachers, to the flags, pompoms, and ribbons they were waiving above their heads.

There was never a dull moment, as celebrities, like stand-up comedian Wacky Kiray and actress Nikki Valdez, entertained the crowd with their song numbers.

As the crowd went wild when Robredo finally arrived, Escudero shared the stage with her. So did 11 out of the 15 mayors in the province, and several members of the provincial board and other local candidates.

One would think then that an endorsement from Escudero would be imminent, but it did not come.

For a moment during his introduction for Robredo, it seemed the Sorsogon governor was about to give some sort of an endorsement for his kababayan.

“You can rely on her,” said Escudero of the woman who had beaten him in the 2016 vice presidential contest. “She is not only a daughter of Bicol, but a daughter of Sorsogon.”

Editor’s Note: An earlier version of this story reported that Robredo’s late mother, Sally Gerona, hails from Bulan, Sorsogon. This has been corrected.

But before Escudero could continue, he was interrupted by Robredo’s campaign manager, former senator Bam Aquino, who tapped him from the back to signal that Robredo’s running mate Senator Kiko Pangilinan had arrived.

The two former senators could be seen speaking in hushed tones for a few seconds, before Escudero once again faced the crowd and told them he had to cut short his introduction of Robredo. He then called out to Pangilinan to come on stage.

It’s not surprising at all for Escudero not to categorically endorse Robredo. He is one of the leading senatorial bets in pre-election surveys, and a guest candidate in the tickets of Robredo’s opponents, senators Panfilo Lacson and Manny Pacquiao. Escudero is keeping his cards close to his chest.

Rival political camps having common Senate candidates is peculiar to Philippine elections. The elections of 1998, 2004, 2013, 2016, and 2019 saw this phenomenon in full display.

This is not lost on Robredo, whose only condition for her guest candidates is for them not to endorse any presidential bet. This is the same principle being followed by her opponent Lacson.

Escudero’s categorical endorsement, however, would have been a boost to Robredo’s candidacy.

In the 2016 VP race, Robredo, a native of Naga City, won in all provinces of the Bicol region except Sorsogon, the bailiwick of the Escuderos. Escudero came first in Sorsogon with 203,689 votes against Robredo’s 97,129.

Sorsogon is now the 39th most vote-rich province in the country with 538,082 registered voters for 2022.

Perhaps the next time Robredo visits Sorsogon, they should just let Chiz finish what he has to say. – Rappler.com