CONGRATS, JILLIAN. Vice President Leni Robredo is pictured here with her daughters Aika, Tricia, and Jillian, who graduated from the New York University on May 18, 2022. 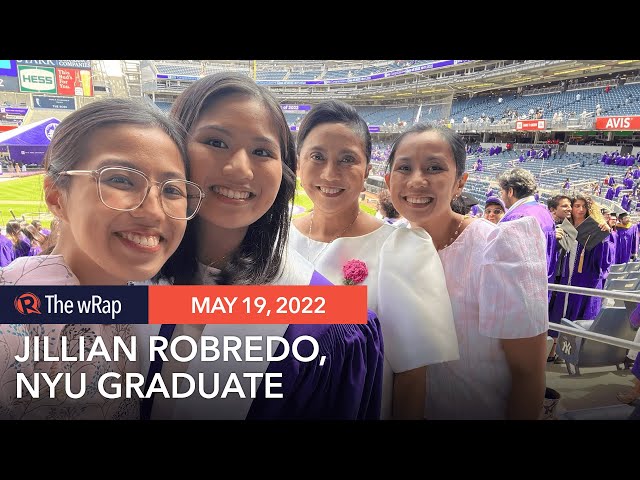 Jillian Robredo – the “favorite” daughter of Vice President Leni Robredo, as the social media jokes go – has given her mother more reasons to be proud of her.

The youngest daughter of the Philippine opposition leader graduated from the prestigious New York University (NYU) on Wednesday, May 18 (United States time), earning her Bachelor of Arts degree with a double major in mathematics and economics.

Her mother and two older sisters, Aika and Tricia, all flew to the United States to witness this milestone in Jillian’s life.

“Core memory. We love you, @jillrobredo! Alam mo bang lagi kitang ipinagmamalaki (Do you know I always talk about you with pride)?” said Tricia on her Instagram post on Thursday, May 19, sharing pictures of the family after Jillian’s graduation ceremony.

“Core memory” is a pop culture reference to the Disney-Pixar animated movie Inside Out, which featured characters symbolizing a person’s emotions and memories. In the film, a “core memory” refers to a special kind of memory orb that helps define an individual’s personality and interests.

“Congratulations to our bb girl @jillrobredo!! It felt like we all graduated today,” Aika said as she shared a family photo taken at the Yankee Stadium, where NYU’s commencement exercises were held.

Robredo was a stage mother through and through, documenting on her social media accounts their New York adventures heading into Jillian’s graduation.

During Jillian’s Baccalaureate ceremony on Tuesday, May 17 (US time), the Vice President snapped a photo of her daughter wearing “what matters most” on her special day.

“Jillian wearing what matters most – a pendant containing her Papa’s ashes, her graduation stole with the colors of the Philippine flag and her Rosas pin,” said Robredo.

Aika, Tricia, and Jillian are the daughters of Robredo and her late husband, longtime Naga City mayor and former interior and local government chief Jesse Robredo. As public servants, the Robredo couple drew praise for their “tsinelas” (slippers) leadership, where they advocated for an inclusive, people-centered, and transparent style of governance.

Robredo had also promised to lead a clean and honest government when she gunned for the presidency in the 2022 elections. Her candidacy sparked a massive volunteer movement, dubbed by some as the “pink revolution” of 2022. Robredo, however, eventually had to bow out of the race after 31 million people chose to elect the late dictator’s son, Ferdinand “Bongbong” Marcos Jr. as the 17th president of the Philippines.

Days after the May 9 elections, the Robredos flew to the US for Jillian’s graduation. It also served as their much-needed family vacation after the grueling 90-day campaign period.

Their movements around New York were closely followed by their supporters, who have been finding comfort in the Robredos’ mundane activities in the US as they continue to grapple with the election results.

Robredo has promised to lead the “biggest volunteer movement” in Philippine history via the Angat Buhay non-governmental organization she plans to launch on July 1, a day after her term as Vice President ends.

Aika and Tricia, however, appealed to some of their fanatic supporters who made fake accounts of them and posted distasteful comments in the livestream of NYU’s graduation ceremonies.

One user pretending to be Tricia poked fun at the Nutribun, a snack distributed in public schools in the Philippines in the 70s, when Bongbong’s father and the dictator Ferdinand Marcos was still ruling. Propaganda claims the Nutribun distribution was a brainchild of Marcos, but it was actually an initiative led by the United States Agency for International Development to address malnutrition in the Philippines under the Marcos presidency.

“I’m not sure what bothers me more: being impersonated on the comments section of the livestream of my sister’s graduation or people thinking that this is something to joke about. Hindi nakakatawa at hindi nakakatuwa. Pakiusap – please stop,” tweeted Tricia.

She also appealed to supporters not to take historical revisionism and red-tagging lightly.

“You’re concerned about historical revisionism but you joke about nutribun and red-tagging, as if these are things to be taken lightly. I will never reduce the atrocities of Martial Law for clout and entertainment. Neither should you,” she added.

Aika also made a similar appeal to their supporters in a separate tweet, sharing a screenshot of a social media user claiming to be her and calling for people in the NYU livestream to take a shot of wine.

These comments from overly passionate supporters clearly did not dampen the mood of the Robredos, however.

Aika and Tricia continued to share pictures of their family taken during Jillian’s graduation ceremony. The sisters shared just how proud they are of Jillian’s achievements.

For the Robredos, life goes on even after the 2022 elections. – Rappler.com