Former senator Antonio Trillanes IV is set to stage a national campaign for the 2022 elections, but the usually no-nonsense rebel soldier-turned-politician is being coy about the exact position he would gun for.

This may mean Trillanes knows more than he’s letting on about the final plans of Vice President Leni Robredo for the high-stakes presidential polls.

Trillanes wants Robredo to run for president so badly, that said he would run for the post instead if ever she opts out of the race.

But when asked by Rappler on Tuesday, October 5, if he is running for a national post in the 2022 elections, Trillanes merely said yes, but refused to disclose the position he is aiming for.

The Commission on Elections’ tent at the Sofitel hotel was abuzz with speculations about Trillanes seeking a congressional seat instead when he showed up along with his allies from the Magdalo party-list group on Tuesday morning.

Trillanes later said he was just there to accompany Magdalo Representative Manuel Cabochan, who is once again the party’s first nominee in the 2022 elections.

“I just showed my support for our Magdalo party-list,” said Trillanes.

He did not respond anymore when further pressed by Rappler if his decision to file his candidacy on Friday, October 8, already means he knows what Robredo will be doing in 2022. 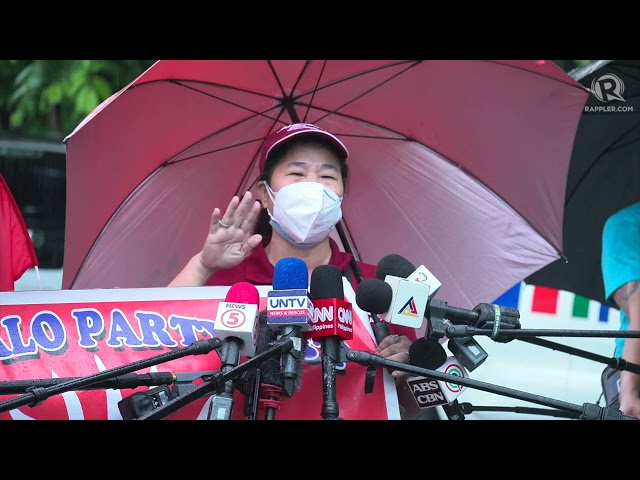 Robredo, the leader of the Philippine opposition against President Rodrigo Duterte, is expected to finally announce her decision on her 2022 electoral bid soon.

Rappler sources said that in searching for a potential running mate, Robredo is hoping to get someone who can help tap a bigger coalition base than the usual alliance between the once-ruling Liberal Party, which she chairs, and Trillanes’ Magdalo.

Robredo continues to keep her allies and rivals guessing on her next play, especially with her decision to transfer her voter registration from Naga City to Magarao town in Camarines Sur.

This clears the way for Robredo to run for Camarines Sur governor instead. But her spokesperson Barry Gutierrez said the voter registration transfer was not necessarily in preparation for a gubernatorial run. – Rappler.com