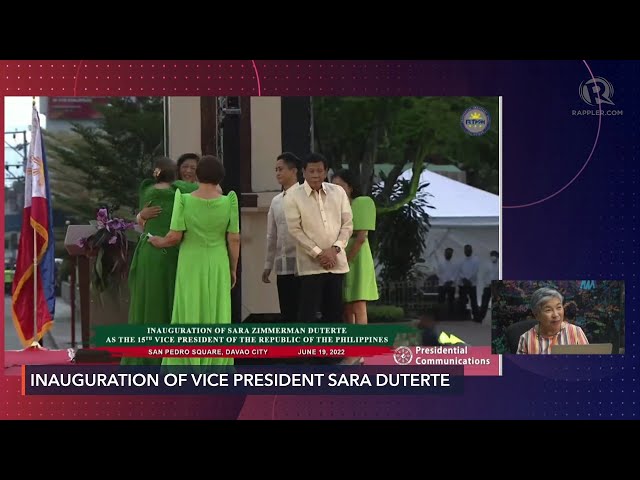 It didn’t escape the spectating public how the usually antic-filled outgoing president Rodrigo Duterte was so stiff during the inauguration of his daughter, Vice President-elect Sara Duterte, especially when near President-elect Ferdinand “Bongbong” Marcos Jr.

While Duterte and Marcos coldly greeted each other on stage for a photo during inauguration, it was Imee who went to the outgoing president for a small talk. Marcos then shared hearty banters with Sara, her mother Elizabeth Zimmerman, as Duterte made his way off the stage. While going down the stairs, the two presidents were near each other once more but did not talk.

It’s no secret that Duterte fostered dislike for Marcos, effectively blaming the President-elect why his daughter settled for the vice presidency “when she knew she was ahead,” and then calling Marcos spoiled and a weak leader.

The Marcos family was “heartbroken” by Duterte’s remarks, said Senator Imee Marcos. Imee appeared to be closer to Duterte, and was in fact repeatedly mentioned by the outgoing president in several speeches especially at the start of his term.

Imee told reporters after the inauguration that she thanked Duterte.

(I thanked the President. He said, “I did not do anything.” I told him, “You did a lot. In six years, you made Filipinos proud.”)

Duterte and Marcos did meet during the campaign, but not publicly. It was on the weekend before his party, PDP-Laban, formally announced it was endorsing Marcos. But despite a party endorsement, Duterte never endorsed Marcos. The President’s allies said it was because of propriety as he did not want to be seen as using the Office of the President for partisan activities.

That did not stop Marcos from branding himself as the continuity candidate, and even the administration candidate. Marcos, during the campaign, and immediately after winning the elections, vowed to continue Duterte’s drug war and even said the outgoing president is welcome to have a post in the administration if he wants to.

But recently, Marcos’ diplomatic actuations had been opposite of Duterte. The President-elect is warm with the international community – he seems to be mending strained ties with the likes of the United States, the European Union, and the United Nations.

In his meeting with diplomats, Marcos said he is committed in ensuring “high-level of accountability” in the aspect of human rights, and that he will conduct a campaign against drugs “within the framework of the law.”

Duterte’s drug war and the killings in Davao City while he was mayor are beinginvestigated by the International Criminal Court (ICC) for alleged crimes against humanity.

Imee said the Dutertes are their “allies for life.”

“The Dutertes can count on us. Davao can count on us, and Mindanao will always be a priority as it was during my father’s time. Hindi yan magbabago. Solid North nga dahil Ilokano kami pero Solid South din dahil kaakibat natin at kaalyado ang mga Duterte habang buhay,” said the senator.

(That will never change. It’s Solid North because we’re Ilocanos, but it’s also Solid South because the Dutertes are our allies for life.) – Rappler.com