Activists from different progressive groups gathered in front of the Commission on Human Office in Quezon City on Tuesday, December 7, upon learning that the Supreme Court have voted on the Anti-Terror Law. Photo by Angie de Silva/Rappler

Facebook Twitter Copy URL
Copied
The announcement is delayed because of several sets of voting, and 'there is a need to accurately confirm and tally the vote of each Justice'

On Tuesday, December 7, the Supreme Court justices logged on to Zoom to decide arguably the biggest case in recent years – the constitutionality of a feared anti-terror law that, if upheld, would put the nation “permanently under a situation worse than martial law,” according to one former justice.

By afternoon, they had a vote.

Supreme Court spokesperson Brian Keith Hosaka confirmed that the voting had ended but “that there is a need to accurately confirm and tally the vote.”

Sources told Rappler that justices had to vote several times per issue or per section that the 37 petitions raised an objection against.

Hosaka said, “Considering that there were numerous issues resolved in the case, as well as the fact that each Justice had to vote on each issue, there is a need to accurately confirm and tally the vote of each Justice in order to ensure the correct resolution of the Court per issue.”

“Rest assured that the Supreme Court Public Information Office (PIO) will provide the media and the public with an accurate summary of the action of the Supreme Court with respect to the Anti Terror Act case at the soonest possible time,” said Hosaka.

Wednesday, December 8, is a special non-working holiday, so the announcement might potentially be extended to Thursday, December 9.

The wait would no doubt fuel speculations.

On Tuesday, a radio report claimed that the entire law had been declared constitutional except for Section 4 or the definition of terror. It caused confusion because if the definition was struck down, how would the law operate?

But Associate Justice Marvic Leonen took to Twitter to dispute the report.

Petitioners would have wanted to void Section 4 for overbreadth, saying the supposed vagueness gives law enforcement the power to define the terms as they please, leaving the “suspects” grappling to find ways to challenge them in court.

Rights groups mobilized as early as Tuesday in front of the Commission on Human Rights (CHR), and activities will continue until and after the decision is officially announced.

The National Task Force to End Local Communist Armed Conflict, behind intense red-tagging of activists and an intense legal offensive on progressive groups, had said they were just waiting for the Supreme Court to decide before they go all out.

“The much awaited ruling will impact on us all as human beings, its implications and consequences on our basic civil and political rights to be felt beyond the here and now,” said one of the counsels, Edre Olalia of the National Union of Peoples’ Lawyers (NUPL). 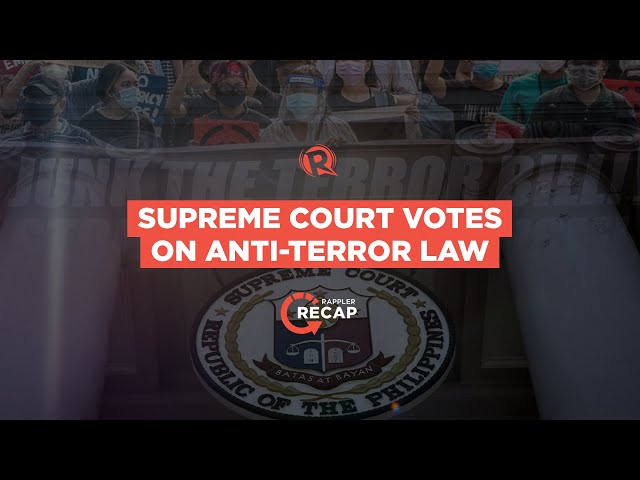