He nodded and I got into the cab.

He steered the cab in the direction of the street that has become synonymous to fake documents.

Our investigation of annulment mills and scams started with a tip that some courts were releasing annulment decisions in wholesale quantities, for a price. It was widely circulated “word on the street”, somewhat an open secret.  But what was less known was the extent of these irregularities – as we discovered a string of court anomalies and spurious annulment decisions issued nationwide – from northern Luzon to Mindanao and how many people profit from the heartbreak of others.

Inevitably, I made my way to Recto.

I was hoping to find the “NSO Marriage Certificate” (when people actually refer to the annotated marriage certificate that is released by the Philippine Statistics Authority) that I had been hearing so much about whenever we encountered falsified documents. The recognized get-out-of-jail card of the newly annulled. The one that scammers and lawyers alike offered as part of the total annulment package.

Recto is where you can buy just about any document you need – a diploma, a transcript, a driver’s license.

But could I buy a faux marriage certificate annotated with the details of a faux annulment?

My cab driver seemed to be sure I could when he learned what I was really looking for.

He handed me a business card. It was for a print shop that listed land titles, birth certificates and any kind of I.D. as among “any kind of paper works” that it could print. A passenger who offered a fake driver’s license gave it to him. I got off at the end of the university belt and began looking for a print shop. I found a smattering of tables spread out with documents on display.

He took me to a print shop and asked for a certain Adan. He pointed to me and told Adan, “Naghahanap sya ng pang-annul. Sabi ko ikaw.”  (She’s looking for an annulment. I told her about you.) 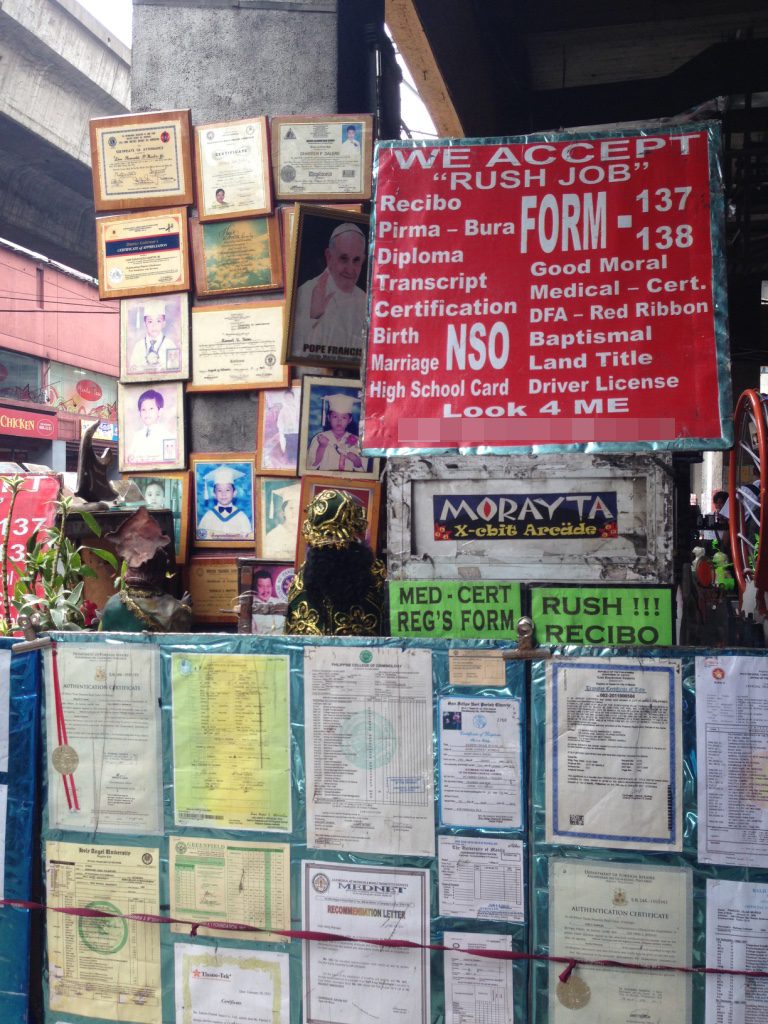 I told Adan my older sister wanted to petition me so I can go to the United States, but can only do so if I am single. So I needed my marriage annulled fast.

It was a spin on the desperate and urgent undertones that had now become a familiar track in the different narratives of our various case studies.

Adan was all business, rattling off other requirements that I need to present to the embassy.

And just like our interviewees had attested, someone would fast talk them and promise them to make the bad marriage, the memories of the despicable ex, all go away for a price.

Adan wanted P8,000 for this “annulment package” which included a court decision supposedly penned by a lawyer, a CENOMAR, and annotated marriage certificate on “actual” NSO paper.  When I protested, he said it would still be cheaper than hiring a lawyer myself.

(You need the real one, the one on NSO paper. The fakes ones are just P500, that will get you into trouble. What I’m going to give you is the one that lights up, we get the paper from the NSO. That’s delivered to us at night by someone on a motorcycle.)

He agreed to a discounted price of P4,000 if I did not want to include the court decision.

I asked him if he could show me this paper and he countered by asking for payment.

When I told him my wallet contained only small bills, he shrugged his shoulders and turned to answer one of 3 cellphones.

I headed for the Avenida Arcade address listed in the calling card my cab driver gave me.

Avenida Arcade is lined with document vendors squished on either side of the street. Cardboard placards brandish a list of documents that could be printed and sold. Samples of documents are posted on cardboard and covered with plastic.

It was a flea market of facsimiles. But where were the marriage certificates?

A girl in a narrow stall was talking to a couple of customers and I fell in line.

I need an annotated marriage certificate showing that my marriage was annulled, I said.

“’Yung local, ‘yung NSO o ‘yung totoo?” she asked briskly. (The local one, the NSO or the real one?)

She met my confused glance and explained that she needed to know so she could recommend the best fit.

I decided to change track to see if a purpose different from a visa requirement would fetch me a lower price.

She recommended a real NSO marriage certificate to be sure. The fake one would only be good for pre-employment requirements but for those offices that would check like the bank or government agencies, she suggested a “real” document, one printed on NSO paper.

“Dating tiga-NSO ‘yung nagbibigay sa amin nun. Umalis na siya dun kasi mas malaki ang kita dito. Pero may contact pa din siya dun sa loob.” (We get that from someone who used to be in the NSO. They left because they make better money here, but they still have a contact on the inside.)

Again, I asked for a sample of this document that until now I had only heard of but not seen. “Nasa gawaan po kasi namin yun. Bibilhin pa din po namin yun pag may order, e, may kamahalan.” (It’s in the printing place. We buy the paper when there is an order. It’s a bit expensive.) I filled up the paper that served as my application form. I settled for a mash-up of Ryan Gosling and Bradley Cooper. A last minute tug of nationalism prompted me to add San Andres to the last name of “my husband”.

She told me to come back after an hour, but it was after 3 hours when she finally handed me a Manila envelope with a marriage certificate stating that the marriage of Anne Cruz to Ryan Cooper San Andres was declared null and void by Judge Leticia P. Morales of Manila Regional Trial Court Branch 24 on August 20, 2014. I was married and annulled all in one day. Not even Las Vegas can beat that.

I showed the Philippine Statistics Authority (PSA) a copy of the annotated marriage certificate I purchased at Recto.

At first glance, it is a good fake, Aurora Reolalas, chief of the PSA vital statistics division, acquiesced. The requisites are there: the PSA seal on the upper left hand side, the bar code at the bottom, and the signature of national statistician Lisa Bersales on the lower right.

A quick check of the transaction code on top of the bar code showed no such records exist in their system.

“Sometimes, the name of the person on the document does not correspond to the transaction code,” said Reolalas.

But what about the paper that is purportedly supplied by someone on the inside?

“They can fake everything else, maybe even the paper, but not the transaction code,” said Reolalas.

According to Reolalas, the color of the paper is changed regularly and actual documents are scanned in different premises to avoid possible collusion between those working on the documents and the civil registry.

But not too many are aware of this. Or even if they were, those truly desperate to get out of a stifling marriage sometimes don’t mind the collusion. And it could come with great cost. (READ: IN NUMBERS: The state of the nation’s marital woes) – Rappler.com

This story is part of the series, “The annulment business”, on annulment mills and annulment scams. Reporting for this project was supported with a grant from the Journalism for Nation Building Foundation. Part 6 concludes the series. For tips and information, email us at investigative@rappler.com.