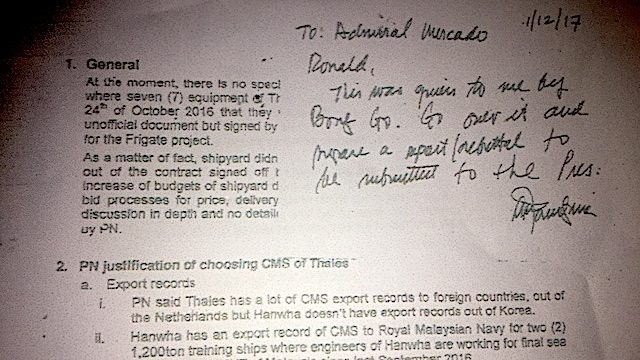 In January 2017, Go gave Defense Secretary Delfin Lorenzana a white paper endorsing a supplier that now stands to be selected to provide the critical Combat Management System (CMS) to be installed in the warships. The total project cost is P15.5 billion.

Go’s office also asked a Navy officer involved in the implementation of the project – then Frigate Project Technical Working Group chairman Commodore Robert Empedrad – to a meeting in Malacañang to discuss the selection of the CMS. Empedrad would later submit a written report addressed to Duterte and Go.

Go issued a blanket denial when reached for comment, saying he never intervened in the project. He said he did not give Lorenzana any white paper related to the project nor asked Empedrad to brief him on the CMS selection.

“I have not intervened in the procurement of DND of its computer system for its ships. I have not participated nor intervened, directly or indirectly, in the transactions of DND,” Go told Rappler reporter Pia Ranada.

The frigates project is one of the big-ticket modernization projects initiated and practically completed during the administration of Benigno Aquino III, and finalized and signed in the early months of the Duterte administration. It is the Department of National Defense (DND) that conducts bidding for projects of the Armed Forces of the Philippines (AFP).

Hyundai Heavy Industries (HHI) won the bid to build two ships for the Philippine Navy. Under the contract, the South Korean company will also acquire several systems – based on the technical requirements of the  Philippine Navy – from secondary suppliers to install in these ships.

The importance of the CMS, considered the heart of warships, cannot be understated. It integrates real-time data from all the ship’s sensors and data from other parties or other nearby ships necessary for situational awareness at sea.

Former Philippine Navy chief Vice Admiral Ronald Mercado stood by another CMS supplier that technical working groups from the Navy selected as most suitable for the warships. (READ: PH Navy relieved after disagreement over P16-B warships)

Mercado’s actions would cost him his post. Just before Christmas last year, he was unceremoniously relieved for alleged insubordination.

The officer that Go asked to meet in Malacañang – now Rear Admiral Robert Empedrad – was installed Navy officer-in-charge in a hastily organized change of command ceremony on December 19, 2017.

The DND has submitted to Malacañang names for Mercado’s permanent successor. Empedrad is among them.

A year ago, in the first week January 2017, Go gave Defense Secretary Delfin Lorenzana a white paper expressing preference for Hanwha Thales, another South Korean company, to provide the CMS.

Lorenzana gave the white paper to Mercado. He wrote on an attached Post-it note:

This was given to me by Bong Go.

Go over it and prepare a report/rebuttal

to be submitted to the Pres.

The white paper argued “there is no specific logic or justification on the preferred list of PN where seven (7) equipment of Thales are included.” It was referring to the other supplier – Tacticos Thales of The Netherlands – that the Philippine Navy preferred.

It also trashed the Dutch company that supposedly caused many countries “suffering from their poor supports of logistics services and upgrade of their outdated CMS.”

In contrast, the white paper gave a glowing endorsement of Hanwha Thales to counter arguments raised against it.

“Hanwha will provide the Philippine Navy the most economic and effective logistics and upgrade etc (almost free riding or on boarding) after delivery or brand new CMS with the logistics support based on large number of ships and continuous upgrade/modernization policy of Korean Navy with government funding supports,” the white paper read. A week after Go gave Lorenzana the white paper, his office sent a letter to Empedrad inviting him to Malacañang on January 20, 2017, to discuss the CMS Selection.

The letter was signed by Undersecretary Christopher Lao of the Office of the Special Assistant to the President. Rappler has no details about the meeting in Malacañang nor the people who attended it.

Go claimed he didn’t know about it and that Lao had long left his office. (Lao is now Housing and Land Use Regulatory Board CEO and commissioner.)

But Empedrad sent a report to Malacañang 3 days later, dated January 23, 2017, addressed to the President and Go. He upheld that Tacticos Thales was the better supplier of CMS and debunked most of the arguments that favored Hanwha Thales.

Go told Rappler he also didn’t know about this report.

Empedrad wrote, “The Frigate Acquisition Project PMT (Project Management Team) sustains its preference on Tacticos of Thales Nederlands as the CMS for the two PN Frigates.”

The debate did not end there, however. For the rest of the year, the DND and the Navy continued to discuss which company should supply the CMS, delaying the project altogether.

In early December 2017, a supposed copy of Lorenzana’s letter to Duterte circulated in the military. It was calling for the removal of Mercado over his insistence on Tacticos Thales.

When Rappler asked Lorenzana to confirm it, he said, “Look. I did not sign it.” A week later, Malacañang ordered the relief of Mercado. – with reports from Pia Ranada/Rappler.com