Facebook Twitter Copy URL
Copied
PCIJ: In Sara Duterte's case, some unusual situations are apparent, in terms of sudden and sharp rise in her net worth

In all these election years, Rodrigo Duterte did not only win the post he ran for; he also managed to leave his cash assets untouched for campaign purposes. In fact, his Statements of Assets, Liabilities and Net Worth (SALNs) during these years would indicate increases in his cash assets, except for the one he filed in 2001, when he ran again as Davao City Mayor.

In the 2013 elections, Rodrigo Duterte ran unopposed for mayor of Davao City. In his campaign-finance documents, he declared a meager P85,884 in campaign expenditures, with the bulk of that amount  – P60,000 – going to meals and drinks at the After Dark Piano Bar. His submitted papers also say that he did not receive any contribution and had zero unpaid obligations.

In the 2016 presidential elections, Duterte reported a total of P375 million cash and in-kind contributions. He said that he used P371.5 million for his campaign, with P200,000 coming from his personal funds. That would therefore leave some P3.7 million in unspent funds from the contributions he had received.

Duterte’s net worth rose by P3.9 million from 2015 to 2016, based on the SALNs he filed during these two years. In fact, much of the increase happened in just 6 months, between June and December 2016, when his net worth somehow shot up by P3.35 million.

His December 2016 SALN reflects an increase of P3.6 million in cash assets compared with the corresponding figure in his December 2015 SALN, plus “Other Personal Properties” valued at P1 million. Yet even as his liabilities declined by P200,000, his investments decreased as well, by P900,000, during this period. Then again, 2016 was when he divested from Honda Cars Gen. Santos – his only for-profit private interest appearing in his SALNs since 2000 — which should translate to an increase in his cash assets. 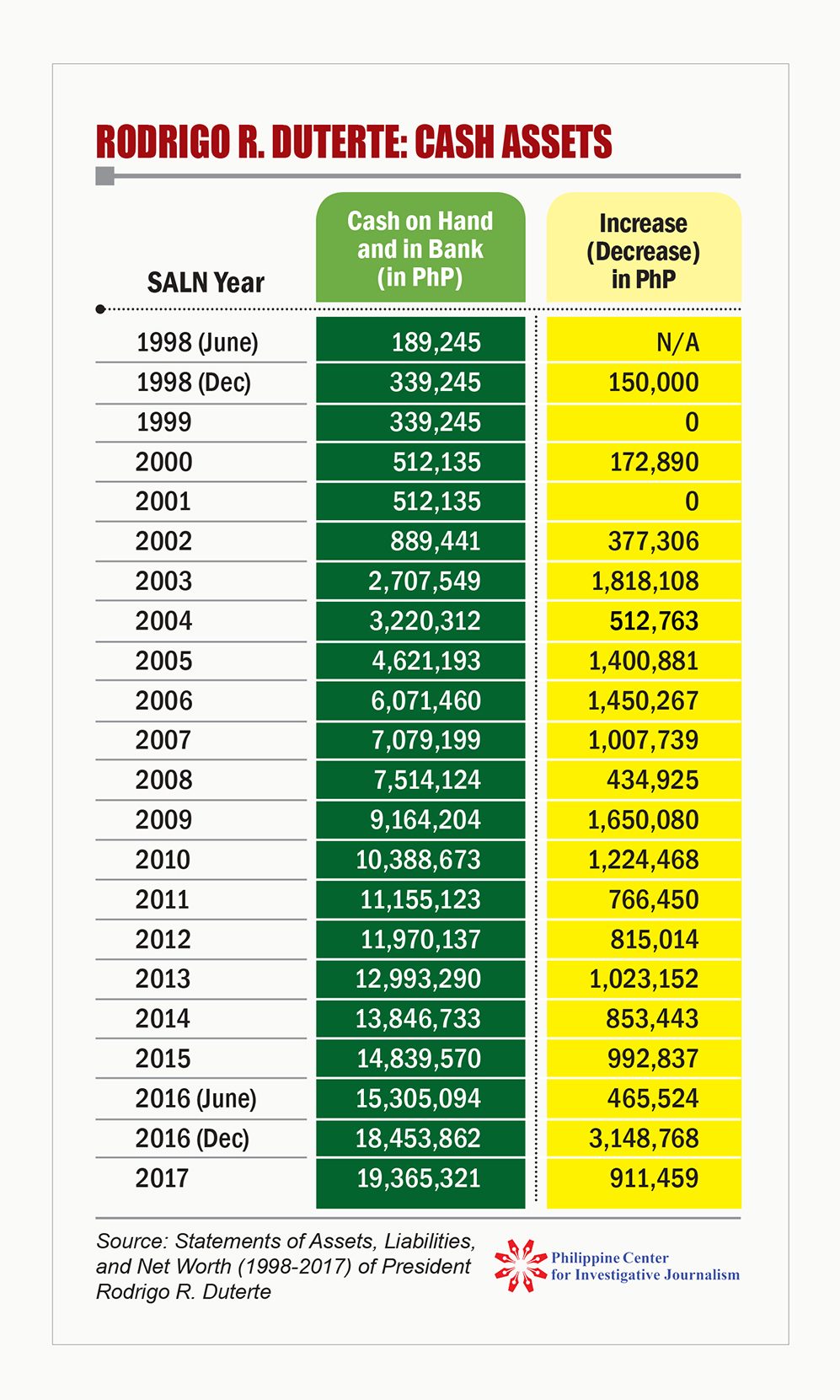 In Sara’s case, some unusual situations are apparent, in terms of sudden and sharp rise in her net worth; for certain years, her real assets and personal properties kept growing, despite parallel increases in her liabilities.

A year after she was elected vice mayor in 2007, her declared net worth of P7.25 million grew to P18.49 million in 2008. Curated data using belated declarations of acquisition costs, however, reflect a more modest increase of P4.6 million in her net worth from P13.88 in 2007.

Yet, her marriage to fellow lawyer Manases R. Carpio in October 2008 may have boosted her net worth only slightly at this time. Sara reported in her 2008 SALN an annual gross salary of P340,000, and an annual gross family income of only P667,422. By these amounts, it would be hard to explain the significant rise in her net worth, and acquisition of more real assets, from 2007 to 2008 – declared or curated. After a 3-year break from public office, Sara reported in her 2016 SALN a net worth of  P34.9 million, or 58% more than her SALN filing in 2012 of P22.12 million. A P12-million increase in the value of her real assets accounted for the difference.

But the biggest increase in her net worth year-to-year was recorded in her 2017 SALN, filed nearly a year after she returned to work as mayor of Davao City, and her father was elected President. Sara’s net worth in 2017 climbed to P44.83 million, or an increase of 28.45% from what she had declared the year before. This time, the difference came from a surge in her personal assets, which in 2016 was only P11.30 million but ballooned to P20.59 million in 2017, or an additional P9.29 million. Paolo’s net worth tracked a similar path. The SALN he filed in 2007on his first year in office as barangay captain showed a net worth of P8.34 million that rose by 98% in 2008 to P16.51 million, when he reported the acquisition values of all 7 real properties.

In his 2008 SALN, his real assets represented acquisition costs of real properties and vehicles bringing the amount up to P13.74 million. Sans the vehicles, he declared his personal assets at P4.27 million.

Paolo would experience his second net-worth upsurge in 2017, although by December of that year he would resign as vice mayor of Davao City. 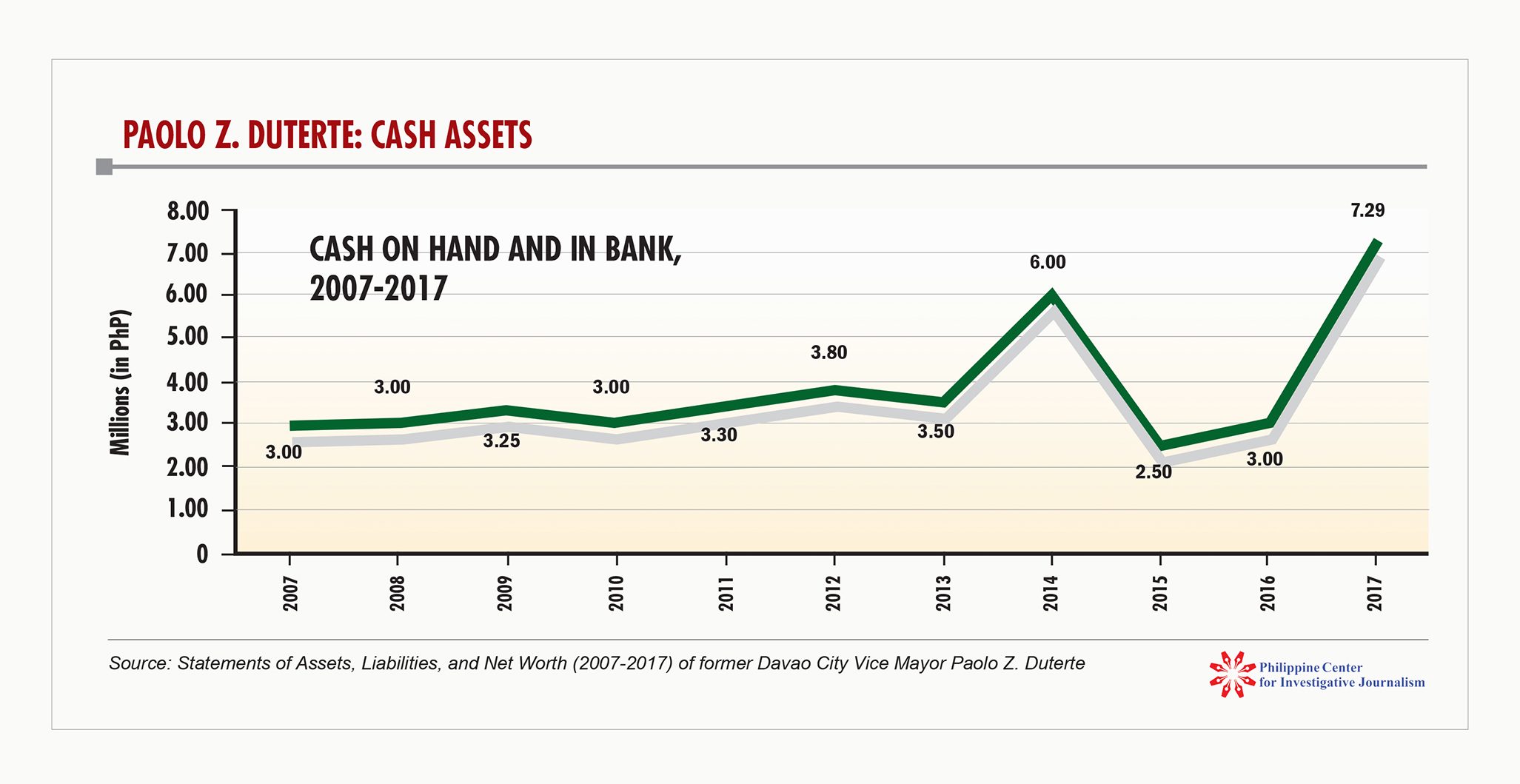