MANILA, Philippines – Corruption cases were filed with the Office of the Ombudsman on Monday afternoon, August 18, against at least 53 persons for their alleged involvement in multi-million-peso anomalous projects of the National Irrigation Administration (NIA) in Caraga since 2012. Members of the Philippine National Police (PNP), Department of Justice (DOJ), National Bureau of Investigation (NBI), and the Department of Public Works and Highways (DPWH) filed some 30 bound documents as evidence.

The case filed on Monday pertains to alleged corrupt dealings involving 3 NIA-funded projects in Caraga. They are MAP Irrigation Project Packages 2, 3, 7 worth a total of P53,682,027 (US$1.2 million*).

But the MAP Irrigation Project (MAP IP) has a total of 7 packages worth P119,816,309 ($2.7 million). Cases for anomalies spotted in the 4 remaining packages will be filed soon, possibly within the week, said Lacadin.

MAP IP was meant to build canals and other irrigation works in the remote villages of Mat-i, Ambacon and Pinana-anof in Las Nieves, Agusan del Norte.

The NIA officials now facing charges are to blame for “the negligence on the part of the NIA for the delay in the implementation of the project. Supposedly the projects should have been finished last quarter of 2012 or first quarter of 2013 but until now, they are not yet completed,” Lacadin told Rappler.

The non-implementation of these irrigation projects ultimately affects the more than 240,000 farmers in Caraga, 37,300 of whom are rice farmers dependent on good irrigation, according to Department of Agriculture (DA) statistics.

The cases are a result of a special investigation involving various government agencies. In 2013, after publicly scolding the NIA for poor performance, President Benigno Aquino III ordered a probe into what was causing NIA to lag behind its targets.

The 7 MAP IP packages were bid out and awarded to contractors in 2012 while Modesto Membreve was NIA Caraga Regional Manager.

At least 5 of these were proven by the special investigation to have been put under the control of Gardinel Jimenez of DCDC, known to contractors as “James” or “Jim.”

But on paper, these packages were awarded to 5 different contractors from Region 3 (Central Luzon): two from Nueva Ecija, two from Pampanga, and one from Bulacan.

DCDC itself is based in Pampanga but with an office in Butuan City.

But onsite inspection by investigators of the 5 canal works in April showed a gross discrepancy between the reported progress and the actual status of the projects.

For instance, Package 3, awarded on paper to MCB Zamora Construction of Pampanga, involved the construction of a 1,300-meter concrete hollow block canal which would connect villages of Las Nieves to a dam site in the upper region of Agusan del Sur.

But the April inspection found the actual length of the constructed canal to be only 520 meters, far from the 91% completion status reported by NIA Caraga a month ago.

The project was supposed to have been completed within 100 days, or by October 24, 2012. But as of the onsite inspection, a year and 4 months had already passed since the deadline and the canal had not even been half-way finished.

Package 1, awarded on paper to LMG Construction from Nueva Ecija was not completed on time because of the delayed delivery of raw materials and lack of equipment.

Because the concrete blocks, embankment, filter drain and river rechannelling were not completed, flooding in December 2012 not only destroyed what had already been accomplished, but also obliterated the main dam which had been built in 2004.

The investigation revealed that the 5 contractors awarded the MAP IP packages were mere dummies of DCDC run by Gardinel Jimenez and his wife Corazon.

Two sub-contractors hired to finish 3 of the packages admitted they were hired, not by the contractors on paper, but by James Jimenez of DCDC.

A check with the Securities and Exchange Commission showed that “Dungan Constructors and Trading Corporation” was registered in June 2005, with office address in San Fernando, Pampanga.

Implementing Rules and Regulations of the Government Procurement Act say companies whose principal office is in the same province should be given an equal chance to bid for infrastructure projects. But 80% of the 163 winning contractors in 2012 do not have main offices in Caraga.

The contractors from Nueva Ecija (LMG Construction and WIRO Construction) also revealed that they never even participated in the bidding for MAP IP packages. But they allowed the Jimenez couple to use their license as contractors in exchange for payment.

According to sources, they told investigators they never even visited the project sites.

Aside from NIA Caraga projects they allegedly controlled through dummy contractors, the Jimenez couple was officially awarded 10 projects.

But the 17 anomalous projects may just be scratching the surface. NIA employees claimed that the bidding of at least 195 projects were rigged upon the orders of Membreve, who was then NIA Regional Manager.

The contracts were not submitted to COA for review, violating COA rules requiring contracts and other required documents to be submitted within 5 days from the execution of the contract.

Awarding of contracts to companies outside the province was also rampant during Membreve’s time, a violation of the Implementing Rules and Regulations of the Government Procurement Act, which says companies whose principal office is in the same province should be given an equal chance to bid for infrastructure projects.

Disbursement vouchers submitted by NIA Caraga to COA lacked required documents like statement of work accomplished, inspection report and pictures of the project site before and during construction.

The memorandum also noted there was “an attempt to conceal the deficiencies” of the disbursement vouchers.

The two contractors – John Arne Construction and Virlo Construction – refunded the P6.4 million in September, 3 months after they received the checks.

A month after, Membreve explained to COA that his office had mistakenly paid the contractors. He blamed “honest human error” by his staff and the voluminous transactions in his office. But COA asked, “If indeed it was an error, how come it took them 3 months to correct that human error?”

In a phone interview with Rappler on Monday, August 18, Membreve denied DCDC or James Jimenez was awarded any MAP IP package. He also denied allegations of rigged bidding during his time as Caraga regional manager.

“How can there have been rigged bidding when other officials and COA were present? As far as I know, our bids and awards committee was very thorough when recommending contractors for projects,” he said in a mix of English and Filipino.

He also said contracts were well-documented with all required files submitted to COA.

As to the COA observation noting how a majority of contracts were awarded to companies outside Caraga, he said this could not be helped since there were only around 10 contractors based in Caraga at the time.

“Of course we have to open the bidding to everyone so it is competitive. And many contractors nowadays have nationwide licenses to operate,” he said.

After being replaced as a deputy administrator at the NIA central office, Membreve has been assigned to the Mini Hydropower department under the Office of the Administrator.

Current NIA Caraga officials gave assurances the ills of the past are being cured. NIA Caraga Manager of Engineering and Operations Constancio Bana-ay Jr told Rappler they have instituted reforms in the bidding process.

“We require the owner of the license to be the one to sign the contract. We no longer allow them to send a representative or for the contract to just be sent to them,” he said.

If something goes wrong with the projects, NIA can threaten to have their licenses revoked. This should discourage contractors from subcontracting the projects.

Contractors are also required to submit an Implementation Schedule that lists down all the tasks they need to accomplish to finish the project and the deadlines for each task, said Bana-ay.

“Irrigation managers in each province go to the site before, during, and after the deadlines,” he added.

As an added precaution, irrigation projects are geotagged. This means photos of the projects are embedded with geographical information (latitude and longitude coordinates) verifying where the photo was taken. These photos are sent to NIA Caraga every month, said Bana-ay.

While DA Caraga Regional Director Edna Mabeza acknowledged corrupt practices in NIA in previous years, she said it may not be incompetence or corruption stalling irrigation projects.

“Sometimes it’s not easy to finish projects because it rains in Caraga all throughout so you can’t say when the money is released, it will be finished on time,” she told Rappler in a mix of English and Filipino.

The instability of the peace and order situation is also an issue. There are times when the contractors’ bulldozers and other equipment are mysteriously burned or damaged.

But whether or not reforms have been made, officials implicated in alleged NIA corruption in 2012 remain in government.

Mabeza, who was appointed to her position in 2011, said those with cases with the Ombudsman are in “floating” status. They still receive salaries from the government but have been given different positions. 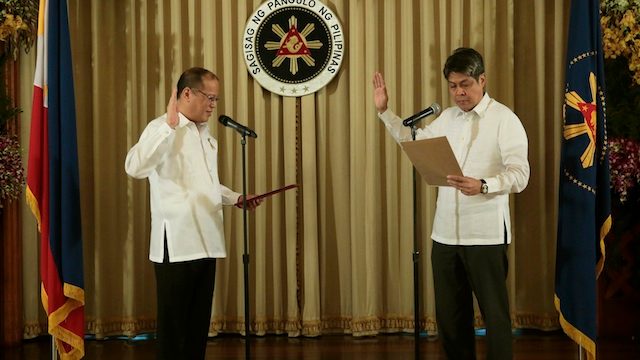 But Membreve, the official who was in the best position to stop the anomalies, was even promoted. In 2013, he was appointed by Agriculture Secretary Proceso Alcala as NIA central office acting deputy administrator.

Agriculture Undersecretary Emerson Palad said Membreve’s appointment was approved because “he had been cleared of the charges against him.”

On July 31, Membreve was replaced by current NIA Deputy Administrator for Engineering and Operations Erdolfo Domingo.

Presidential Assistant for Food Security and Agricultural Modernization Francis Pangilinan was aware of an investigation of concerned NIA officials and said last week they were awaiting its completion.

But Pangilinan, who now oversees NIA, said Membreve was replaced as “part of our reshuffling of various national and regional officials to ensure efficiency of our operations.”

Membreve is “one of many” affected by this policy, he told Rappler.

In 2012, the year NIA only achieved 65% of its irrigation targets, then NIA Administrator Antonio Nangel explained that their poor performance was caused by Typhoon Pablo (international name Bopha) that hit parts of Mindanao in December that year.

A week after Aquino reprimanded the agency, he fired Nangel, replacing him with Claro Maranan. In June 2014, Maranan’s term expired. He was replaced by current NIA Administrator Florencio Padernal.

The NIA, formerly an attached agency of the DA, was put under the Office of the President in May 2014 with the appointment of Pangilinan. – Rappler.com