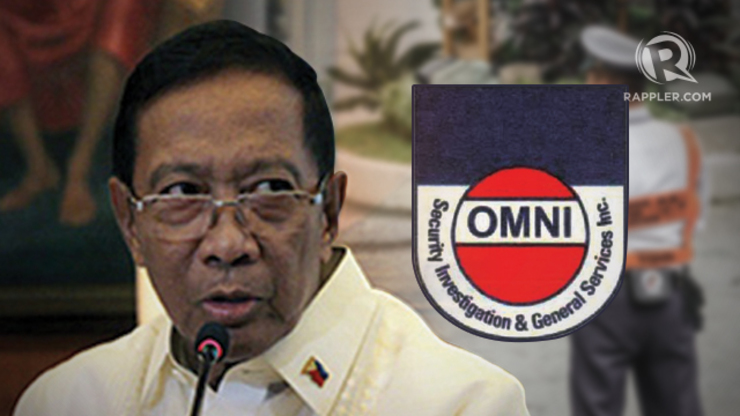 MANILA, Philippines (UPDATED) – Security guards and janitors manning public schools in Makati City could be the highest paid blue-collar workers  in the country – on paper.

A security and janitorial company identified with an associate and a “dear family friend” of Vice President Jejomar Binay has been allegedly cornering hundreds of millions of pesos in contracts yearly from the Makati City government. It’s a virtual monopoly that bolsters allegations bids are rigged and winners are pre-determined.

From 2010 to 2013 alone, Omni Security Investigation and General Services Inc, a company put up in 1999 and operated at a loss during its first year, bagged more than P1.3 billion ($29 million*) in contracts from the Makati City government.

This excludes the previous years when Omni virtually gobbled up security and janitorial services bidded out by the Makati City government when the Binay patriarch and matriarch were mayors.

In 2012, the company apparently split into two – Omni Security Investigation for the security services and Corporate Solutions Manpower and General Services Inc for janitorial services.

Both companies however still share the same addresses and the same contact numbers, based on their submissions to the Securities and Exchange Commission (SEC). And they remained loyal suppliers to the city government.

In only its supposed first year of operation, Corporate Solutions bagged a P109-million ($2.4 million) janitorial services contract from the Makati City government.

Omni Security’s alleged ties with the Binay family first surfaced when its former president, Jose Orillaza, claimed during a Senate hearing that he was a mere dummy for the former Makati mayor.

Orillaza said Binay’s close associate, Gerardo “Gerry” Limlingan, was Binay’s “representative” in Omni and while he was not among the original incorporators, Binay made him a co-signatory for the checks issued by the company.

Orillaza said he served as Omni president from 1999 to 2010, and was kicked out for his close ties to former Makati Vice Mayor Ernesto Mercado. Mercado, who lost the mayoral race to Binay’s son, Jejomar Erwin “Junjun” Binay Jr, has been spewing one exposé after another involving his former political patrons.

Limlingan has been invited by the Senate to appear in the hearing but summonses sent to him could not be served. Senate Blue Ribbon subcommittee chair Aquilino “Koko” Pimentel III said Limlingan could not be located.

Rappler repeatedly called up the Omni Security and Corporate Solutions office, but was told Limlingan was not available for an interview. We first called his office Wednesday last week and continued trying to contact him until Friday, October 10, but were repeatedly told Limlingan was out and that none of the company’s officials were available.

In 2010, Limlingan survived an ambush attempt at the height of the election campaign, prompting Binay, who was then seeking the vice-presidency, to ask the Commission on Elections to put Makati under its control.

“Gerry Limlingan is a very dear family friend. The attempt on his life is a despicable act that deserves condemnation. It is obviously politically-motivated,” Binay said in a statement following the failed ambush try.

It was through Limlingan that Binay tapped former professors of the Asian Institute of Management, getting tips on how he should market himself as a national candidate. “He is said to have a very practical management style, one that is needed to make a small team running a big campaign flexible,” the authors wrote.

Controlled by Limlingan and wife?

But a corporate shakeup and political alienation, dislodged him from the company.

Its corporate papers showed that Omni Security’s current chairman and president is Marguerite E. Lichnock, the wife of Limlingan. Other officials in the company are also said to be identified with the Binays.

Together, the Limlingans monopolize the security and janitorial requirements of the city of Makati.

From a fledgling company, Omni Security Investigation and General Services  has transformed itself into a major supplier of the Makati City government.

Based on available data posted on the Philippine Government Electronic Procurement System (PhilGEPS), it was awarded 36 contracts from 2010 to 2014, with a total contract price of P1.321 billion. This includes the contracts after the company was split into two.

In fact, the PhilGEPS data showed that Omni Security was the number 2 top contractor/awardee of the Makati City government from 2009 to 2014. 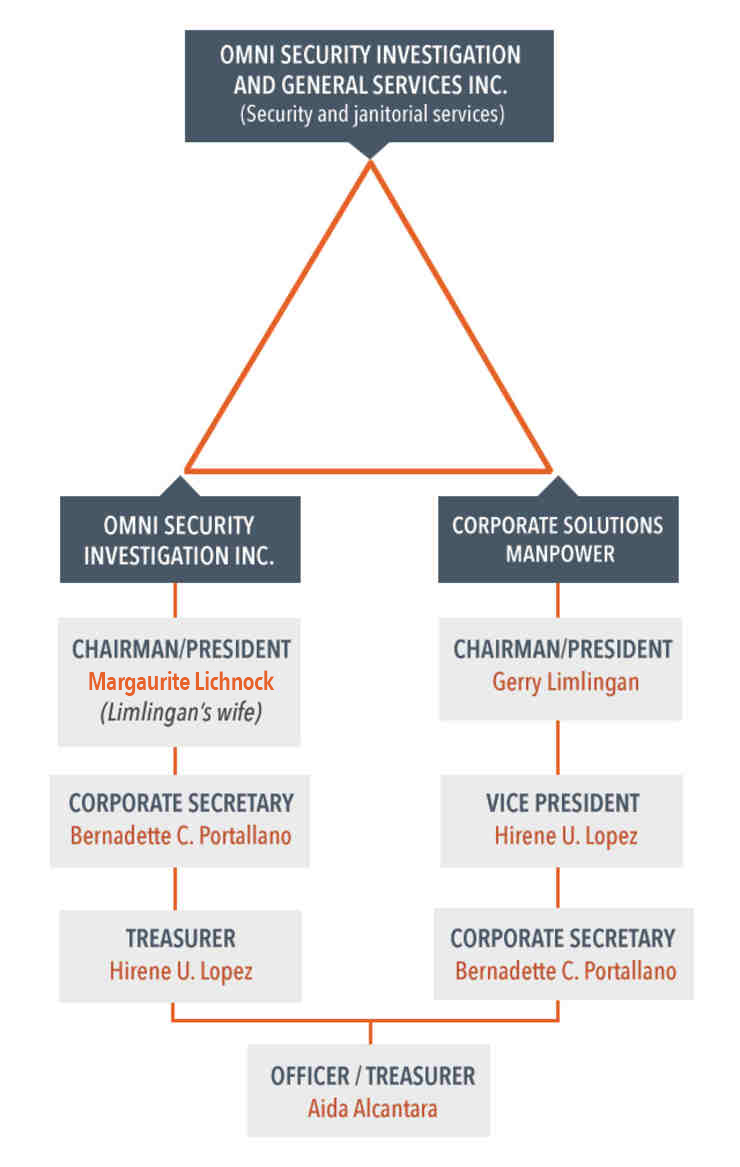 Former Makati General Services Department head and city councillor Ernesto Aspillaga, in his testimony  before the Senate Blue Ribbon sub-committee hearing, said that contract bids at the Makati City government were all manipulated and that Binay when he was mayor, and his wife Elenita, who was also a one-time mayor, played an active role in rigging the process. (READ: Former official: Rigged bids in Makati under VP Binay, wife)

What about the contracts for the security and janitorial services?

Rappler sought to determine if there were other bidders who competed for the security and janitorial contracts, but bids and awards officials said they would need clearance from higher-ups.

But based on available data, what is clearly established is that Omni Security – and for that matter, Corporate Solutions – has been the sole security and janitorial services provider of the Makati City government for the longest time.

Public Works Secretary Rogelio Singson, whose department bids out billions of pesos in infrastructure and civil works projects yearly, said that while a company, supplier, or contractor may bag several projects that are bidded out by a local government unit, this does not necessarily mean there is a sweetheart arrangement.

However, “if this particular contractor corners all contracts, then it’s time to investigate or replace the members of the BAC,” Singson said.

Then there are the supposed winning bids themselves that indicate there was hardly any competitive bidding at all.

Rappler’s analysis shows there is almost little or no difference in at least 10 contracts from 2010 to 2014, between the Approved Budget Contract (ABC) and the contract price. The ABC is the fund allocated for the project while the contract price reflects the bid supposedly entered into by the bidder.

From the Office of the Vice President

On VP Binay’s ties with Limlingan
They have been good friends for almost 30 years. (Limlingan) helped the VP with his piggery business. He is also president of the VP’s Foundation, JCB Foundation.

On Limlingan being a Binay dummy
This is absolutely not true. Limlingan is a legitimate businessman.

On Omni’s real ownership
Omni was owned by Mercado through Orillaza (former Omni president). Orillaza is a known protégé of Mercado.

This means that Omni secured the security supply with only a difference of P4,000 from the ABC and the janitorial services with a P3,000 difference from the ABC.

At least in one contract awarded to Omni – a security service for various public schools in Makati – the bid submitted and contract price won by the company exactly matched the ABC and the bid price, down to the last peso. The project for the year 2011 cost P92,620,604.

But as far as the BAC of Makati City is concerned, Omni Security’s bids were always the “lowest calculated bid.”

Based on his experience at the Public Works department, Singson said genuine competitive bidding usually brings down the contract price by about 5-10%.

He added that transparent and competitive bidding in the DPWH  have resulted so far to P28 billion in savings for the national government.

With the Makati City government as its single biggest client, Omni Security managed to turn around its fortunes in its 14-year existence.

SEC records show that in its first year of operation in 2000, its income amounted to P47.8 million but it operated at a negative, incurring losses of P539,847.

Its newly-formed sister company, Corporate Solutions, did not declare any revenues for 2012 and incurred losses of P68,887.

But a P125.692-million janitorial contract from the Makati City government was the bonanza it needed to be in the black. – with reports from Rey Santos Jr and Wayne Manuel/Rappler.com