Why Mercado surfaced to turn against Binay

Dec 3, 2014 8:30 AM PHT
Aries Rufo
Facebook Twitter Copy URL
Copied
Two days after his second appearance in the Senate, another emissary approaches Mercado with a more definite counter-offer – P1 billion for his silence 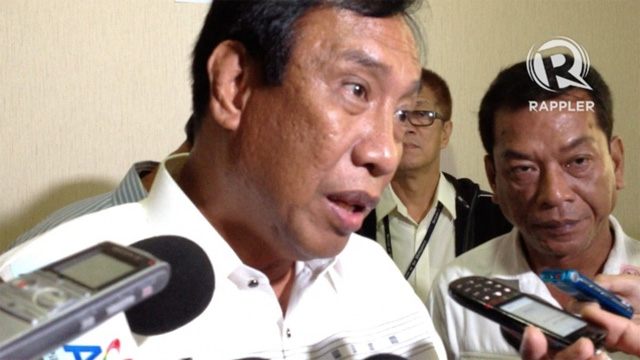 MANILA, Philippines – Neatly tucked inside his wallet is a faded handwritten note that former Makati vice mayor Ernesto Mercado wrote a few months ago. He gave his daughter a duplicate copy of the note, with a grim message in it.

The note says that if anything untoward happens to him, authorities have no one to blame except the Binays. “What do police usually check when someone figures in an accident or an incident? They check your wallet for identification. I want to give authorities a clue if something happens to me,” Mercado said as he fished the note from his wallet.

Mercado has been giving Vice President Jejomar Binay and his camp some sleepless nights these past few months with his revelations about the goings-on in the Makati City government. He has been Binay’s recurring nightmare, a persistent headache for the Vice President.

Mercado had his share of troubled nights before he appeared in the Senate and dropped his own bombshell. Before this, he had faded into obscurity after losing the mayoral race in Makati to Binay’s son, Jejomar Erwin “Junjun” Binay. He had retreated to his resort in Coron, Palawan, which played host to the Miss Earth pageant this year, engaging in cockfighting from time to time.

But the death of former City Hall colleague, Nelson Morales, and a series of suspicious activities, gave him a sense of foreboding he could not ignore.

Morales, a former Makati City engineer, was gunned down by assassins in September 2012 after attending a wedding ceremony. At the time, Morales was the Albay provincial chair of the United People’s Alliance (UNA) of Binay and was the presumptive bet of UNA for the mayoral race in Malinao town in Albay.The Binay camp was quick to tag the killing as the first election-related violence for the 2013 mid term polls.

– Bondal before Mercado appeared in Senate

Based on reports, 7 guns-for-hire executed the assassination. One of them was killed while engaging the responding police in a gunfire. A second suspect, who was at-large, was killed by police last November 27 during a routine anti-hold-up operation in Polangui town in Albay.

“Engineer Morales is a trusted official of Vice President Jejomar Binay and Mayor Jun Binay, who are both affiliated with UNA. Morales served as city engineer since the term of VP Binay as mayor of Makati,” UNA secretary-general Navotas Rep Tobias “Toby” Tiangco said in reaction to the killing.

Binay, in a separate statement, expressed his admiration for Morales, citing “his dedication to public service and his desire to serve his hometown.”

Remulla accused Morales of conspiring with Mercado and former Makati purchasing officer Mario Hechanova in rigging bids for projects in Makati City. The Vice President found out about the conspiracy when he was about to end his term as Makati mayor, leading to the political estrangement with Mercado, Remulla said.

But Mercado remembers it differently.

In his testimony at the Senate, Mercado said he and Morales were the ones who prepared the bags containing kickbacks allegedly for the Binays, even providing the locks and the number combinations to the recipients.

Hechanova, who was also former vice chairman of the bids and awards committee of Makati, also testified that they fixed the bids on orders of Morales, who was supposedly acting on behalf of Binay. (READ: Former employee: fixing bids ‘usual practice’ in Makati)

Mercado would not speculate why Morales was killed. What he knew, however, was that it was not a good omen.

Rappler interviewed at least 7 sources to reconstruct how and why Mercado surfaced after 3 years of hibernation.

Was there an elaborate plot to destroy the presidential ambition of Binay, as his camp maintains, or was it a case of a desperate man seeking to be heard and wanting to save his life in the process?

Or was there a confluence of events and merging of vested interests that led to it? Our interviews show a combination of factors.

Earlier this year, Mercado sensed that his moves were being monitored. “Someone’s following me, watching my moves.” He knew who was monitoring him.

As a precaution, he prepared the handwritten note and gave his daughter a second copy for safekeeping. “In case something happens to me, the authorities would know the lead to pursue.”

An LP source, who refused to be identified, said Mercado sought out someone close to Roxas to seek help. Mercado was hoping the LP would be interested to find out what he had to offer.

A meeting was set and Roxas’ aide met Mercado in a hotel. But it would not be a face-to-face encounter. A separate source said Roxas’ emissary and Mercado occupied separate rooms in the same hotel. “They communicated through Skype,” the source said.

The LP may be desperate to find the goods on Binay but they’re also taking extra precautions. They did not know Mercado and were wary about where his loyalties actually lie.

Even before Mercado surfaced, there were indications that the LP had been looking for skeletons in the Binay closet. Former Makati vice mayor Roberto “Bobby” Brillante, a long-time Binay critic, recalled being approached by an LP official to revive the attacks against the Vice President.

I’ve had my skull opened. Who else should I be afraid of?

– Mercado, after suffering from brain aneurysm in 2004

Former close friends before politics drove a wedge between them, Brillante and Binay had been at odds since the latter became mayor after EDSA 1. It was Brillante who filed Binay’s first graft case before the Sandiganbayan.

The emissary told Brillante: “Maraming maniniwala sa iyo. (Many will believe you.) But Brillante refused to take the bait. “Pagkatapos ng lahat, ako rin ang maiiwan sa huli (At the end of it, I’ll be left by myself).” It was Brillante’s way of saying he had learned his lesson.

Brillante said no one offered help when he got in trouble going against Binay. In 2004, he was fined by the Supreme Court a total of P1 million after he was found guilty of libel when he accused Binay of plotting the assassination of Makati mayoral candidate Augusto Syjuco in 1987.

He was again convicted of libel when he insinuated that Sandiganbayan justices got bribes to exonerate Binay from the graft case he filed. He spent a month in jail.

Instead, Brillante referred the LP emissary to lawyer Renato Bondal, who was also a former Binay ally. In July 22 this year, Bondal filed a plunder complaint before the Ombudsman against Binay and his son Junjun over the alleged overpricing of the Makati City Hall parking building. (READ: Plunder case filed vs VP Binay, Makati officials)

In a separate interview, Bondal said he had long wanted to file a case against the Binays but he did not have the evidence at the time. He said he filed the plunder case to disabuse the minds of Makati residents that he was only a “paid opponent” of Binay when he contested the mayoral race in 2013.

The younger Binay outgunned Bondal in the mayoral race. “Nobody wanted to run against Junjun. There was a black propaganda that I only paid just so Binay would have an opponent.”

When he was preparing the plunder case against the Binays, he got an unlikely call from Mercado.

“He asked me how he could help. I showed him the draft complaint,” Bondal said. “Mercado said, ‘Kulang ito. (This is not complete).’”

Deep inside, Bondal was aware that he needed additional evidence if the plunder case was to prosper. Without additional evidence, “I was concerned it will be downgraded to malversation,” Bondal said. Someone had to provide testimonial evidence to give life to the documents.

As a lawyer, Bondal was concerned that Mercado’s statements would be “self-incriminatory.”

Bondal said there was a confluence of events that favored him. “Mercado’s testimony was the lynchpin of my complaint.” But was it really an accidental cosmic alignment of interests?

If one listens to Mercado, he would appear as one unafraid to face death. In 2004, he suffered from a brain aneurysm that almost took his life. “Nabiyak na ulo ko. Kanino pa ako matatakot?” (I’ve had my skull opened. Who else should I be afraid of?)

This guy was double-crossed big time. Why would he work for Binay covertly? He was already screwed before.

But behind the braggadocio is a man not quite ready to meet his end. One source said Mercado sent out anonymous letters to local media in Palawan about his being under surveillance. Because the letters were anonymous, the local media did not pay attention to his call for help.

The next step was for him to seek out Binay’s natural enemies, the LP.

One of the sources said Mercado first reached out to the LP but they took their sweet time in deciding what to do with him. “Mercado became impatient so he looked for other avenues.”

Trillanes’ interests in the alleged anomalies in Makati city hall goes beyond legislative duties. It is a personal one, going back to 2007 when Binay supposedly betrayed him during the Manila Pen siege.

Trillanes talked with Bondal and concluded that a Senate investigation should be in order. He then filed a resolution seeking an investigation into the alleged overpricing of the Makati City Hall parking building.

Sometime in August, before the Senate was about to start its probe, while Trillanes and his staff were having a meeting at the Sofitel Philippine Plaza Manila, a man approached him and introduced himself. The guy turned out to be Mercado.

“Nagpakilala siya. Baka puwede ko kayo makausap, sabi niya,“ Trillanes said. (He introduced himself. He asked if he could talk to me.) “I thought it was purely coincidence, but as the saying goes, there is no such thing,” Trillanes added.

Later on, he found out that Bondal and Mercado were actually in touch with each other, and that it was Bondal who alerted Mercado about how he could get in touch with Trillanes.

The meeting was awkward for both of them. “I gave him some time to be comfortable with me, and he opened up,” Trillanes said.

For Trillanes, it was a risk accommodating Mercado. “I do not know him.” But gut feel took over. “This guy was double-crossed big time,” Trillanes said, referring to the broken promise of Binay to anoint Mercado as his mayoral bet in 2010. “Why would he work for Binay covertly? He was already screwed before.”

On the possibility of being betrayed by Mercado, Trillanes was pragmatic. “Then it would not be the first time,” he said.

Trillanes said Mercado offered to tell all and the senator offered protection.

Meanwhile, the Binay camp apparently got wind of the information that Mercado would surface. A common friend was sent to talk with Mercado one morning. “This common friend said that the Binays knew there was trouble ahead. Our friend also asked if I needed money,” Mercado said.

Mercado retorted back, “Wala akong balak lumapit sa kanya.” (I have no intention of asking his help).

Two days after his second appearance in the Senate, another emissary approached Mercado with a more definite counter-offer. He was offered P1 billion for his silence but was also required to flee to the United States.

For Mercado, he had crossed the line and there was no turning back. – Rappler.com