INSIDE STORY: The real reason behind Petilla’s resignation 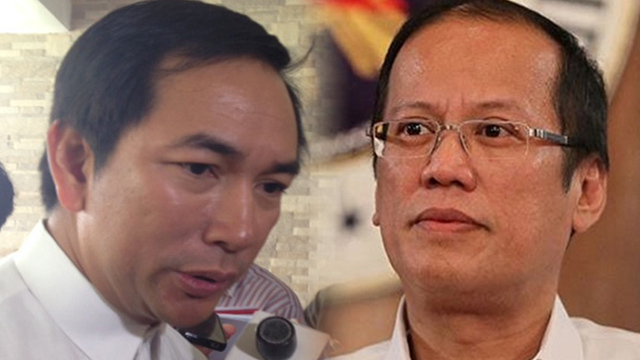 MANILA, Philippines (2nd UPDATE) – Former Customs Commissioner John Sevilla and outgoing Energy Secretary Carlos Jericho Petilla didn’t just resign back to back. They had similar reasons for doing so, too.

While Petilla’s resignation was attributed to his plans to run for the Senate, sources close to him said it was, in fact, prompted by President Benigno Aquino III’s decision to appoint Geronimo Sta Ana as the fifth commissioner of the Energy Regulatory Commission (ERC). Sta Ana is linked to one of the country’s biggest power players, the Aboitiz group.

The appointment didn’t sit well with Petilla because it compromises the ERC and jeopardizes public interest, the sources said.

The ERC is the body tasked by law to protect energy consumers and ensure competition in the electricity sector. It is in the process of determining whether or not power players, among them a unit of the Aboitiz group, colluded in jacking up electricity prices for millions of customers of the Manila Electric Company (Meralco), the Philippines’ largest electricity distributor, in 2013. The ERC’s recent probe found the Aboitiz unit, Meralco, and 11 other power firms liable for “market abuse” but it didn’t say if they were guilty of conspiring with each other.

Petilla officially announced his resignation on April 28, six days after Sevilla tendered his to the Office of the President. Sevilla revealed in an exclusive interview with Rappler that he left the Customs bureau after an appointment he believed was part of a political deal with the Iglesia ni Cristo (INC). The INC, with its 2.25 million followers, is known to be a powerful bloc vote during elections.

On June 18, Petilla said he would stay in the department until June 30.

A favor to the Aboitizes?

Petilla actually resigned ahead of Sevilla. At least two independent sources in the power industry, with whom Petilla shared his story, narrated to us what happened.

Based on the informed sources’ accounts, Aquino asked Petilla sometime in 2014 to recommend names for the last ERC commissioner post that was vacant for two years. The appointment would complete the ERC’s 5-commissioner line-up. Petilla submitted to the President in November 2014 the name of an engineer who had years of experience in his field and a doctorate under his belt.

The President further asked Petilla to have the person vetted by other Cabinet secretaries, and Petilla willingly obliged.

On March 25, however, things took a surprising turn when a report came out announcing the appointment of 75-year-old Sta Ana, an accountant by profession. “It appeared to be a last-minute insertion,” said one source.

Puzzled by the report, the source said Petilla confronted Aquino about it. He wanted to know who Sta Ana was, what his credentials were, and if he was qualified. What Petilla discovered upset him.

Recalling snippets of the conversation between the two officials, the sources said the President admitted appointing Sta Ana upon the request of the Aboitizes, adding that it was the only time he did the business group any “favor.”

“Sec said he literally almost fell off his seat,” one of the sources said, noting it was an obvious case of influence-peddling.

This same source said Petilla believes Sta Ana’s nomination was made through his predecessor, former energy secretary and now Cabinet Secretary Rene Almendras, one of Aquino’s closest friends.  He actively helped Aquino in his 2010 presidential campaign.

Insiders say Aquino convinced Almendras to move to Malacanang and take the powerful position of Cabinet Secretary. In that role, Almendras identifies the priority areas in Aquino’s Philippine Development Plan, monitors and realigns targets, represents the President in meetings, sits in all Cabinet cluster meetings, runs relevant offices in the Presidential Management Staff and the Performance and Projects Management Office.  He reports directly to the President.

Almendras is a former official of Aboitiz companies.

This is not the first time that an ERC appointment was linked to him. Josephine Patricia Magpale-Asirit, his niece from his sister, was appointed ERC commissioner in July 2013.

Rappler sent repeated requests for an interview to Almendras and his office, but we did not receive a response until a day after we published this story. In the email sent on June 21, Almendras wrote: “I had nothing to do with the appointment of Mr. Sta Ana to the ERC.  As a matter of fact, since I stepped out of my DOE (Department of Energy) role, I do not get involved in energy matters.”

We also sought a comment from Aboitiz group officials. They said: “It is the President who appoints the ERC commissioners. We cannot comment on this as the Aboitiz group is not involved in the appointment process.”

Sta Ana, for his part, did not respond to our requests for an interview.

The President appointed Sta Ana on March 19, but the ERC didn’t announce it until April 8.

Petilla tendered his irrevocable resignation on March 26, effective April 30. He, however, remains in his post and is expected to be there until the end of the month.

Petilla’s confidantes pointed out the connections among Almendras, Sta Ana, and the Aboitizes – all of whom hail from Cebu.

Founded in the late 1800s, the Aboitiz group is one of the country’s oldest conglomerates that successfully transformed itself from a shipping to a highly diversified company with a focus on power.

Industry data show it now accounts for over 2,700 megawatts or 15% of the Philippines’ total power generation capacity. It comprises the “big three,” along with San Miguel Corporation, which accounts for also 15% of the total capacity, and the Lopez family, which accounts for 14%. In power distribution, Aboitiz owns the second and third largest electric utility firms in the Philippines – Visayan Electric Company and Davao Light & Power Company, respectively.

Like the Aboitizes, Sta Ana is a well-entrenched member of Cebu’s business sector, having served as partner at auditing firms there for more than 11 years. Among other posts he held, Sta Ana was the president of the Cebu Chamber of Commerce and Industry from 1992 to 1993 and was a trustee from 1994 to 1997 and 2008 to 2010.

Almendras is said to be the glue that holds them together. Before being appointed to the government as energy secretary in 2010, he spent nearly 3 decades in the private sector in Cebu. He sat as president and CEO of Cebu Holdings and Cebu Property Ventures and Development Corporation, both parts of Ayala Land.

Prior to this, he was treasurer of Aboitiz Company, the privately held company of the Aboitiz family, and Aboitiz Equity Ventures, the family’s publicly listed holding company. He has reportedly maintained his close ties to the Aboitizes, with critics claiming he had favored his former employer in his decisions as energy secretary. The Zamora group, for instance, accused Almendras of keeping Mindanao in darkness by blocking the development of hydropower projects in favor of costlier projects of the Aboitiz family.

One of Almendras’ siblings is a friend of Sta Ana, revealed one source close to Petilla, though the source didn’t identify which sibling. Almendras’ sister, Agnes Almendras-Magpale, is Cebu Vice Governor, while his brother Ruben is the chairman of Cebu City Traffic Operations Management and former Metro Cebu Water District chairman.

On June 25, Almendras sent us a letter where he stressed: “I did not nominate, endorse, nor was I even aware of the nomination of Mr Geronimo Sta Ana until he was already appointed as commissioner of the Energy Regulatory Commission. Every person that is involved in the processing of presidential appointees can confirm that I had nothing to do with the nomination of Mr Sta Ana.”

He added it was “unfair” that he was being linked to Sta Ana’s appointment because of his “previous association” with the Aboitiz group. “My employment with Aboitiz and Company was only for a short period from 1997-2001. Prior to that I spent 14 years with the Citibank group. When I left Aboitiz in 2001, I worked for another conglomerate for almost 10 years and held various senior level positions.”

He continued: “I never dreamed of joining government but always valued a clean reputation. Many people who know me have worked and are currently working with me, know that I have my principles and adhere to them. Since joining government I have displeased some people and groups because I have always tried to do the right thing.”

He also denied having anything to do with the appointment of her niece to the ERC.

Petilla didn’t fail to warn the President about the repercussions of his decision and what it means for Filipino energy consumers, sources said.

A questionable appointment puts the ERC’s credibility and competence in question – fundamental things demanded of the regulatory body.

Republic Act No. 9136, known as the Electric Power Industry Reform Act of 2001 (EPIRA), squarely puts the burden of protecting the interest of consumers and ensuring competitiveness in the power sector on the shoulders of the 5-member commission.

In a nutshell, the ERC’s roles revolve around making sure electricity prices passed on to consumers are rational and at the least cost. The ERC is also tasked to promote true market competition, and prevent and penalize market abuse.

To ensure its independence, it must have commissioners who have neither run for political office nor previously worked for, or are affiliated with, any player in the power industry. It is crucial that individuals with unquestionable integrity are appointed to the body. There is no room for conflict of interest.

Putting a commissioner nominated by a power player at the ERC results in a compromised regulatory body. “How can you be sure that the ERC will act in favor of the public and not the power player?” an industry insider lamented. – Rappler.com