REMAINS. The urns of Angel's parents in their home in Camarin, Caloocan City on December 15, 2021.

Facebook Twitter Copy URL
Copied
When she was 11, Angel Santos (not he real name) saw six men kill her parents inside their home. The Philippine National Police killed one in a shootout and closed the case.

In the murder of Eric and Baby Santos*, the sole witnesses were their children. The eldest, named Angel*, is a small girl with big eyes. She was 11.

The home turned into a crime scene at around 3 am on August 15, 2016. A tense Baby was walking in circles in their matchbox home in Caloocan City. She held a piece of paper as Eric and their children slept.

Knocks on the door woke up and rattled Angel. Baby stood ready.

Two men barged in, the one in the front holding a piece of paper. Baby faced them, showing them her own.

Baby’s words did nothing to stop the men. One walked straight to the dozing Eric and kicked him conscious, pointed a pistol to his head, and shot him three times.

The men left as Baby and her children wept. But it wasn’t over.

Angel knew what was coming. 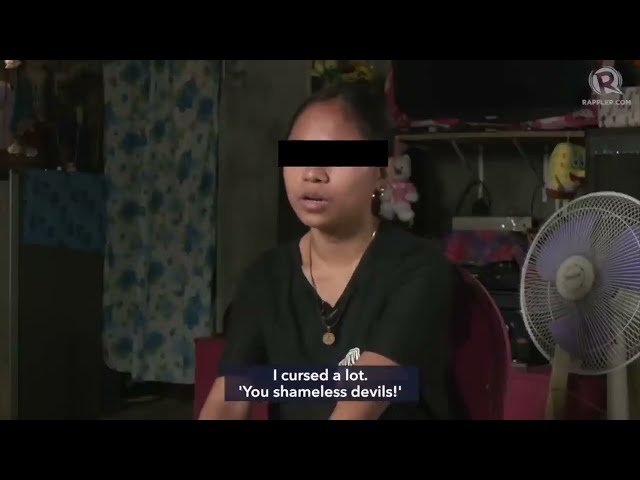 She was barely four feet tall, the intruders three heads taller than her, but with her father studded with bullets, at that moment, she wanted to kill. Heat rising in her chest, she stood between the men and her mother.

“Putangina ’nyo! Ang kakapal ng mukha ’nyo! Wala kayong awa!” Angel screamed as she shed tears. (You motherfuckers! How dare you? You have no mercy!)

Baby reached out again with the same piece of paper that failed to save her husband – a certificate.

It was proof that, just the month before, drug suspects like Eric, a tricycle driver, and herself, a manicurist, had surrendered to local officials for rehabilitation. They promised they would change for the better, and, in exchange, they would be given immunity from execution – or so they thought.

It was a month into the presidency of Rodrigo Duterte, when at the peak of his so-called war on drugs dozens were being killed daily by policemen and vigilantes.

Their targets were the same: drug suspects. Duterte wove a tale about them being the source of all ills in the country. Declaring all drug users as addicts just the same, Duterte once said he would be “happy to slaughter” them all – as Adolf Hitler did with the Jews.

“Please don’t. That’s my daughter. This is our document, proof that we have surrendered,” Baby continued to explain.

“We don’t need that, what we need is both of you,” the man answered. What the man meant was they needed her partner and herself dead.

A shot to Baby’s arm. Angel charged forward, forcing her mother back. The gunman locked his gun to Angel’s head.

“Don’t. She’s a child,” a voice warned from behind the shooter.

Baby pulled Angel behind her and dropped to her knees. She begged them to stop. Angel hoped the man would listen, to find it in himself to see what was in front of him – a defenseless woman with her defenseless child, trembling. The man still shot her mother in the head.

“Duterte kami,” they said, as they walked out.

A generation of victims

Eric breathed. It looked like he wanted to say something to Angel. She walked closer, tried to string his moans into words. Before she could make sense of them, blood choked her father, then he completely fell silent.

She turned to her mother and tried to cradle her lifeless body. As she propped her up, Angel’s small hand went through the back of her mother’s head. Her skull had been shattered.

Angel’s parents would be among the first victims in Duterte’s anti-drug campaign, which has since killed at least 7,000 drug suspects in police operations as of January 2022. Killings by vigilantes inspired by Duterte included, the number of fatalities hovered at around 30,000 as of 2019, according to human rights groups. The number has risen since then.

Angel would be among the first of many – one child in a generation who lost either their father or mother, and in Angel’s case, both, to gunmen who left as quickly as they came.

Angel swore the killers of her parents were policemen. The damning evidence was the piece of paper one of them carried to their home. She said it was a warrant.

Over a week later, police knocked on their doors with news. Good news, they said. The police found Eric and Baby’s killer. Then, they killed him.

On the evening of September 1, 2016, a certain Restituto Romero was shot dead in San Vicente Street in Caloocan City. Police rushed to the crime scene and found a witness. The killer was a man riding a red, white, and black Honda Wave. He wore black.

The officers on the scene radioed the rundown to their city-wide communications line. Minutes later, they found him, whizzing on his motorbike through Bagong Silang, near Caloocan’s boundary with the province of Bulacan.

The intercepting police team was led by then-colonel Reydante Ariza, the highest-ranking policeman on the night shift. They signaled the rider to stop, but he only hit the turbo. The chase led to a shootout, which led to the death of the killer.

Investigator Rhyan Rodriguez remembered that night. It was already over when he arrived, the killer already cold. His job mostly involved writing down what he saw.

He noted the date and time, their location, where the bullets landed, where the motorcycle fell, how the killer spread on the street, and how the scene of the crime operatives (SOCO) unmasked the killer – helmet first, bonnet next. He stopped writing. It was a familiar face. A cop.

“Organic” was how Rodriguez described him, a policeman who was assigned to his own hometown, bound there until he retired. But Manding was a nuisance case. By the time he allegedly shot it out with his superiors, he had been labeled AWOL. He stopped showing up, and word in the Caloocan police headquarters was that he ditched the badge for a more lucrative job at a security agency.

The SOCO extracted a gun, a packet of shabu (methamphetamine), then they found a piece of paper.

It was a list of names. Rodriguez knew some of them. There was Restituto Romero, who was killed the same day. Then, there was Eric and Baby Santos.

The piece of paper that Angel saw was a kill list.

Rodriguez was the same investigator in the killing of Eric and Baby. With Manding found and killed, he declared the case solved.

Rodriguez’s reasoning was simple: Manding matched the description of witnesses in the killing of Eric and Baby – a man clad in black riding a motorcycle – and the victims’ names appeared on his kill list. Who else would kill the couple?

In Angel’s memory, she did not count only one man who killed her parents, she counted six: two men barged into their house, while four men stood guard outside.

For Angel, there would only be justice when all of the men – the killer and his accomplices – were captured. She also wanted them killed.

But the police did nothing more. Rodriguez did not interview Angel nor her siblings. All his witnesses were outside when the double murder happened.

Rodriguez conceded one thing: that there was more than one killer. His witnesses confirmed that two men intruded. But, five years later, that one killer was still at large. Even with Manding being an AWOL police officer, Rodriguez did not probe into the possibility that Manding’s accomplice was a policeman too. Despite all this, the case was still branded as solved and shelved.

This was how the investigation turned cold.

In 2016, when the war on drugs was at its peak, people died by the dozen per day. In Caloocan City alone, Rodriguez counted at least five a night. Rodriguez knew because he was one of only two homicide investigators manning the night shift. Before he could make progress with one killing, another would follow not long after.

“Even if we wanted to probe more, we couldn’t do it, given the number of cases there were. It was the peak of the killings,” Rodriguez said in Filipino.

Caloocan continued to be a killing field. It was in the same city that three minors were killed in a span of two months in 2017. The police’s credibility plummeted so much that the Metro Manila police chief then, Oscar Albayalde, decided to fire all Caloocan cops in September 2017. Rodriguez was one of them.

Rodriguez turned over his case folders to an investigator who had no experience in Caloocan. He couldn’t even remember his name. Rodriguez was only reassigned to Caloocan in late 2018, and he no longer probed into the death of Angel’s parents.

By the internal standards of the Philippine National Police, if one suspect in a case is captured or killed, the case is considered solved.

In the Philippines, there can be 20 killers in a case, with only one of them captured, yet the police can still declare it solved – a death sentence to the probe.

“The painful reality is, old cases get buried by new ones. It’s the new ones that get the priority,” Rodriguez said.

The case of Angel’s parents could still be reopened, but it would take the Caloocan police the will and resources to listen to Angel, who was still a minor. Angel would also have to trust the police with the case, which to her, was impossible.

Five years passed. Angel turned 16.  She lived with her aunt Maria, Baby’s youngest sister, in a house not more than 50 meters from where her parents were killed.

The home’s door was made of metal, engraved with the outline of a rosary. Right above it, pressed in all capital letters, was one word: FAMILY.

They were 12 in the house, with Angel still the eldest child.

Baby and Eric were with them, ashes in urns they kept above their cabinets. In Angel’s dreams, she saw them alive, flesh and bone.

Angel wanted to follow them, to stay with them longer. – Rappler.com