Rappler has found links between the disinformation ecosystem in the Philippines to Russia and the St Petersburg-based Internet Research Agency (IRA), a state-sponsored troll farm.

Among these links is an alleged “geopolitical expert” named Adam Garrie, who writes for websites known to spread misleading claims, and who has been quoted extensively in online posts and interviewed by news networks with links to Iran and Russia. (READ: Don't let 'experts' online fool you: Here's how)

Garrie has also been identified in a research paper by New Knowledge about the Russian IRA as being part of the “broader propaganda ecosystem.” He is a contributor to globalresearch.ca, geopolitica.ru, and eurasianaffairs.net – all segments of the disinformation networks connected to the IRA and Russia. A Russian IP address is traceable from the last two sites.

Garrie was first mentioned by a website known as The Daily Sentry which supposedly publishes “news and current events.” Created in January 2018, its owner is unknown and not publicly disclosed. Since posting on Facebook as early as February last year, The Daily Sentry referred to Garrie in 41% out of its 66 mentions of “experts” it cited in its posts.

Garrie was introduced to mainstream media days later, also in March 2018, via the pro-Duterte paper, The Manila Times, whose chairman emeritus Dante Ang was appointed by the President as “special envoy for international public relations.”

Times columnist Rigoberto Tiglao, a journalist before he became press secretary and spokesman of former president Gloria Macapagal Arroyo, quoted Garrie in several of his columns, including one in March 2018. In a March 12, 2018 column titled, “The U.N. Human Rights Commissioner owes President Duterte a full apology,” Tiglao published Garrie’s opinion in full.

Days later, on March 23 of the same year, Sass Rogando Sassot, one of the key defenders of Duterte on social media, shared a link to a page from Eurasia Future, one of the websites that Garrie writes for. The link featured an interview of Garrie by one Rado Gatchalian, a Filipino living in Sydney who manages several pro-Duterte pages.

New Knowledge, a company (consisting of data scientists) that monitors social media and detects attacks in the ecosystem, submitted a report to the US Senate Select Committee on Intelligence last December 2018. The report is a culmination of independent investigations into data sets submitted by Facebook, Twitter, and Alphabet that consisted of text, videos, images, and other content linked to the IRA.

In a diagram that’s part of the report (see below), the links of Garrie eventually connect to a site called GI Analytics – among the Russian propaganda pages most promoted by Internet Research Agency ad accounts on Facebook. Linked to other Russian propaganda sites through authors, AdWords accounts, and repurposed content, GI Analytics was active from 2015 to August 31, 2016 when, according to its editor Joshua Tartakovsky, the site was “on hold.” Its content is, however, still accessible on the web.

According to the diagram, Garrie also contributes to the following sites with ties to GI Analytics: Russia Insider, The Duran, Geopolitica.ru, Mint Press News, Oriental Review, and globalresearch.ca. It’s a fascinating web of global connections with a single intent: the spread of disinformation. 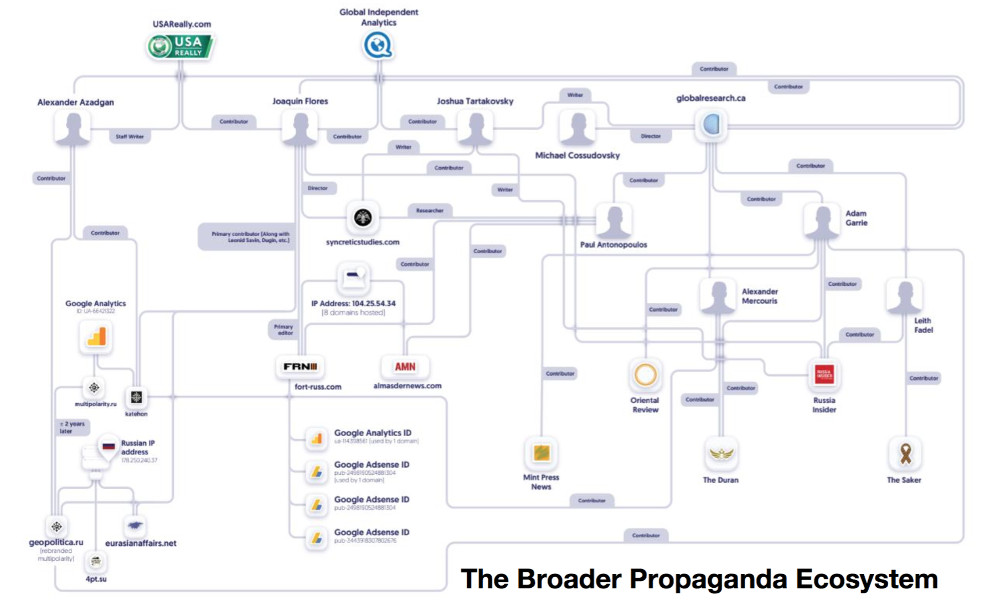 DISINFORMATION ECOSYSTEM. A diagram depicting the 'broader propaganda ecosystem' published in a report by New Knowledge, a company consisting of data scientists that monitors social media and detects attacks in the ecosystem.

Garrie and his Russian connection

Garrie has been interviewed by news networks as a source, particularly by the Islamic Republic of Iran Broadcasting (IRIB)-affiliated Press TV, and RT (formerly Russia Today). IRIB is independent of the Iranian government but its head is appointed directly by the supreme leader Ali Khamenei.

The US Department of the Treasury in 2013 identified IRIB as a network that broadcast false reports and forced confessions of political detainees. In August 2018, Google deleted 58 accounts on YouTube, Google+, and Blogger that were involved in “politically motivated phishing.” The accounts had ties to IRIB.

Meanwhile, RT – which is financed by the Russian government – was identified by the US Office of the Director of National Intelligence in January 2017 as the primary source of propaganda that the Russians used to further their interests in the 2016 US elections.

How The Daily Sentry, a local website, ended up citing Garrie as an expert in efforts to spread propaganda favorable to the Duterte administration, could be explained in part by warmed ties between President Rodrigo Duterte himself and Russian President Vladimir Putin.

When Duterte visited Russia in May 2017, they signed deals that included, among others, a defense agreement and sharing of intelligence and knowledge on the use of nuclear energy for peaceful purposes. Duterte’s entourage included Presidential Communications Operations Office (PCOO) Secretary Martin Andanar, former singer-dancer and then PCOO assistant secretary Mocha Uson, and bloggers Rey Joseph Nieto and Carlos Munda.

All 3 are part of the government’s propaganda machine. Uson and Nieto (who runs Thinking Pinoy) anchor the network that attacks perceived government critics. (READ: Facebook let my government target me. Here’s why I still work with them.)

After the Moscow visit, state-run Philippine News Agency (PNA) reported on May 30, 2017 that the Philippines and Russia's communication offices were set to forge a partnership in information dissemination.

The agreement was signed much later in the year, in November, when Russian Prime Minister Dmitry Medvedev came to the Philippines for the ASEAN Summit. During Medvedev’s visit the two governments signed additional agreements, which included an “MOU on Cooperation in Mass Communications.” (READ:PH, Russia sign 8 agreements, including extradition treaty)

Some PNA staff were also sent to Russia for training on information dissemination with news organization Sputnik.

The point person for the bilateral communications agreement, Josephine Cayabyab of PCOO, according to PNA, met with Nikolai Nikiforov, the focal person from the Russian Ministry of Telecom and Mass Communication. She also met Karina Melikyan, the RT TV head of the International Cooperation department.

Rappler sought comment from The Daily Sentry on how and why they began to cite Garrie on their website, but it has yet to respond. We also sought Garrie's side on the New Knowledge report on Monday, January 21, at 9:54 am via Facebook Messenger. We asked him to comment on allegations that he is part of the Russian disinformation network, but he did not reply as of posting on January 22.

Instead of replying directly, Garrie apparently posted on his Facebook page in response to the article. He said that he is not familiar with the IRA or with GI Analytics and denied the allegations against him. He also denied having connections with the Russian government and reiterated his support for President Duterte.

"[I am] a supreme supporter of Rodrigo Duterte and this is not only not a crime but one of my proudest political positions," Garrie said.

On January 11, 2019, Facebook took down accounts and pages related to TwinMark Media Enterprises, a company that, according to the social media platform, “violated their misrepresentation and spam policies.”

By examining the data, Rappler learned that the takedown included pages which have been promoting The Daily Sentry. Facebook confirmed this in an email, responding to Rappler’s query.

Facebook communications manager Michelle Fojas wrote in a January 18 email: “I have checked on this and can confirm that Daily Sentry’s Facebook page was part of the takedown last week, January 11.”

A visual map of networks and connections on Facebook based on a Rappler database shows interaction and sharing of dubious content among pages known to be owned or created by TwinMark Media.

Among these was Trending News Portal (TNP), which described itself as a “digital news outfit” that specialized in viral stories and whose content was shared the most by Uson. (READ: What is Mocha Uson's top source of news?)

TNP, which had 4.3 million followers, was also taken down by Facebook.

The diagram below shows pages known to be owned by or linked to TwinMark Media, which include TNP.

Nathaniel Gleicher, Facebook’s head of Cybersecurity Policy, had earlier said that when they take down pages, they do not analyze content but behavior.