9 things to know about Bongbong Marcos

Oct 12, 2015 12:29 AM PHT
Jee Y. Geronimo
Facebook Twitter Copy URL
Copied
The son of late dictator Ferdinand Marcos has played as himself in a movie, and claims he has tickets to the first commercial flight to the moon 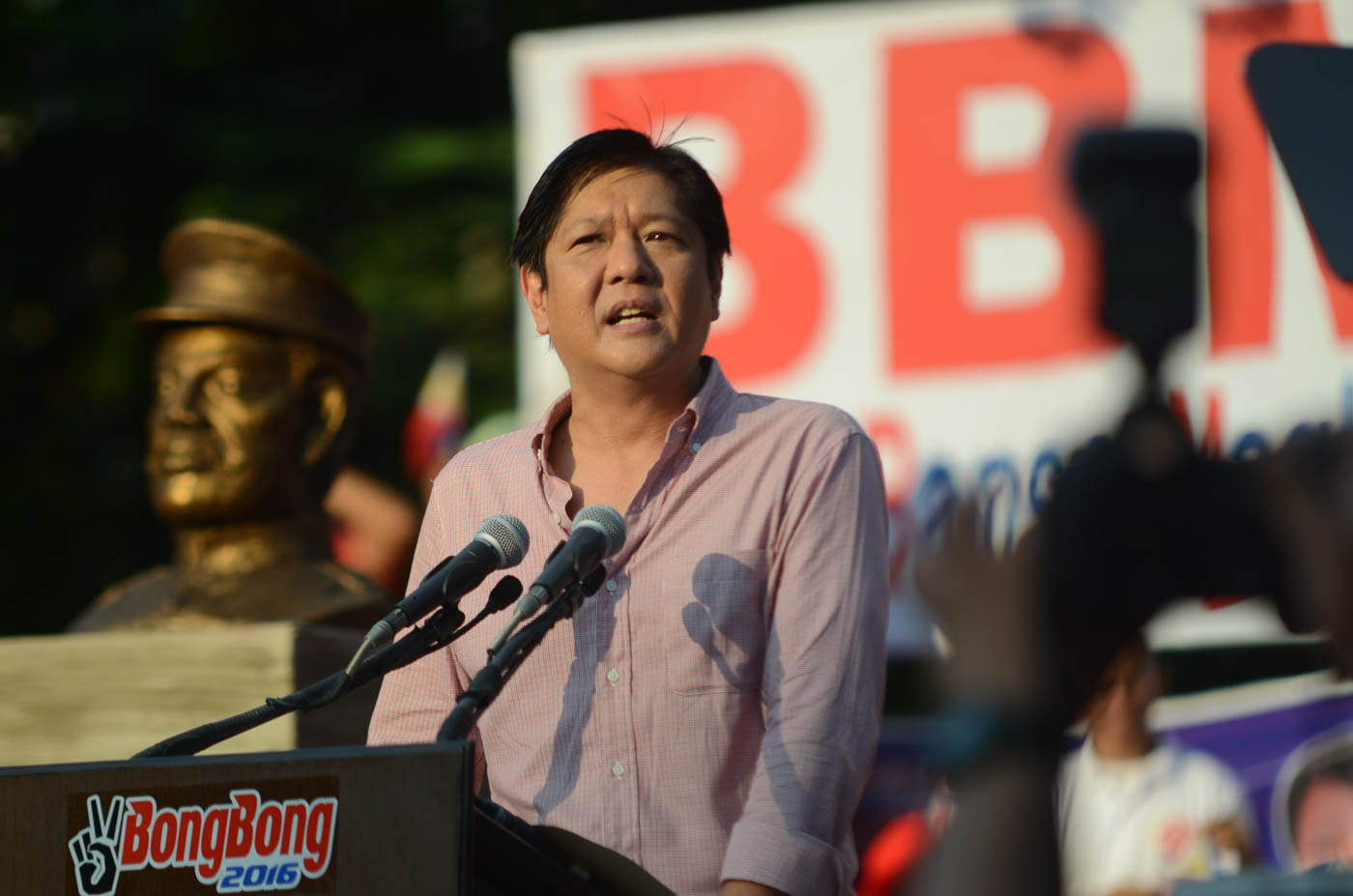 MANILA, Philippines – One of the controversial candidates for the vice presidency in the 2016 elections is Senator Ferdinand “Bongbong” Marcos Jr – son of the late dictator Ferdinand Marcos.

Even before launching his bid for the vice presidency, he has already made statements that have irked many: He sees nothing to apologize for when asked about the corruption and human rights abuses during his father’s regime. For him, the surname he bears is not baggage, and the atrocities committed under Martial Law are not election issues.

But despite all the rage due to these controversial statements, the senator has ranked well in recent surveys: he is 3rd both as a vice presidential candidate and a senatorial candidate in Pulse Asia’s poll conducted last September.

After 5 years as a senator and more than 3 decades in public service, Marcos is aiming for the vice presidency in the 2016 elections and vows to lead a “revolution in heart, mind, and action.”

Who is this man who carries a dictator’s surname with pride? Here are other things you might not yet know about Bongbong Marcos.

Just when you thought the nickname “Bongbong” already sounds peculiar, wait until you hear his other nickname: Bonggets. Apparently, this is what his close friends call him.

The nickname Bongets would later appear in documents related to the controversial Disbursement Acceleration Program. Marcos has since denied endorsing the release of P100 million through the National Livelihood Development Corporation.

2. Showbiz? Bongbong starred in a movie as… himself. 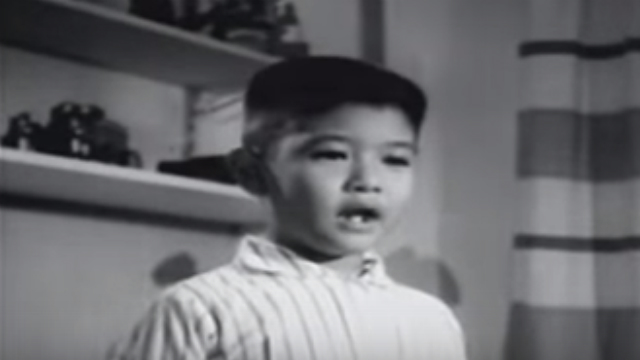 The young Bongbong also starred in the movie as himself. Perhaps a mere coincidence, or a foretelling of the future, one scene in the movie shows Bongbong giving a speech about his dream of becoming a politician.

An excerpt of the speech goes:

“Dear friends, ladies and gentlemen,
I am Bongbong Marcos.
When I grow up, I want to be a politician.
I will serve my country, especially the poor.
And I will give them plenty of bigas and ulam.
I’ll give them many, many gamot at damit.
And for their children, I’ll give them many toys so they will not cry anymore.”

3. Rumor has it that Bongbong is a clone, and he is Grace Poe’s half-brother.

Rumors always hound politicians, and Bongbong is not an exemption.

Apparently, an urban legend is going around since the 1980s that the real Bongbong has long been dead, and the one who’s alive today is a relative who was convinced by Imelda to play pretend and to undergo plastic surgery.

Here’s a more recent one: Presidential candidate and Senator Grace Poe – a foundling adopted by actors Fernando Poe Jr and Susan Roces – is rumored to be the daughter of the late president Marcos and former Sampaguita Pictures actress Rosemarie Sonora. This would make her Bongbong’s half-sister.

The two senators joke about it, and at one point even called each other brother and sister, but Bongbong dismissed the rumor for having no basis, while Poe said “it’s really not true.”

4. His father influenced his decision to enter politics.

In a rare interview about two decades ago, Marcos answered questions from Kris Aquino, one of the daughters of his father’s arch-political rival, Benigno “Ninoy” Aquino Jr. The interview covered an array of topics, from Marcos’ love life, to the criticisms his family faced.

He also talked extensively about his father, and how he used to argue with the elder Marcos when it comes to political ideologies, although he eventually “came around to [Ferdinand Marcos’] way of thinking.”

His father also influenced his decision to enter politics.

“The only way you can explain my having entered politics is definitely because of how my father really… he even said it when he was still alive, he would say ‘I have committed not only myself to the work that I have done. I have not committed only my person, but my wife and my family too…'”

Eventually, what led him to public service was his desire to serve the province of Ilocos Norte, after Ilocanos helped him and his family when they were exiled in Hawaii. He said he “wanted to be part of the national debate,” but he “did not enter politics to become president.”

But former First Lady Imelda Marcos has always wanted for her son to seek the highest post in the land. Marcos, however, believes “the time is just not right” to run for president.

5. He once saw Ninoy in Malacañang and witnessed a light moment between his father and Aquino.

In the same interview with Kris Aquino, Marcos talked about what seemed like a light moment between the two rivals Ferdinand Marcos and Ninoy Aquino during the latter’s visit to Malacañang when Bongbong was still young.

Bongbong: That was history in the making, nakatago ako sa likod, and I was so surprised, ang tawagan nila brad. (That was history in the making, I was hiding at the back, and I was so surprised, they call each other brad.)
Kris: Because they were both from Upsilon diba? (Because they were both from Upsilon right?)
Bongbong: Your father asked this, sabi niya: “Brad, bakit mo naman ako kinukulong? Bakit mo naman ako nilagay sa Fort Bonifacio?” Ang tanong naman ng tatay ko: “Brad, kung ikaw nasa posisyon ko, hindi mo ba gagawin?” Ayun, nagtawanan silang dalawa. (Your father asked this, he said: “Brad, why are you jailing me? Why did you place me at Fort Bonifacio?” My father asked: “Brad, if you were in my position, won’t you do the same?” Then they both laughed.)

6. The first Philippine-made rockets were named after him.

A 1975 news clipping entitled “Rockets test-fired from Philippines” tackled the country’s experiment in making its own ballistic missiles. Then-President Marcos himself witnessed the “successful” firing of 4 “bongbong” rockets.

“The defense of the Philippines cannot be left to alliance with other countries. We must assume that there will be contingencies where even the United States may not be ready to come to our assistance,” the president was quoted as saying.

7. He claims to have received tickets to the first commercial flight to the moon from former US President Richard Nixon.

In a recent interview, the senator talked about some of the famous people he met in the Malacañang Palace, including former United States President Richard Nixon.

“I like President Richard Nixon. He gave me a ticket to the first commercial flight to the moon… I hope that promise is still valid, when it happens.” 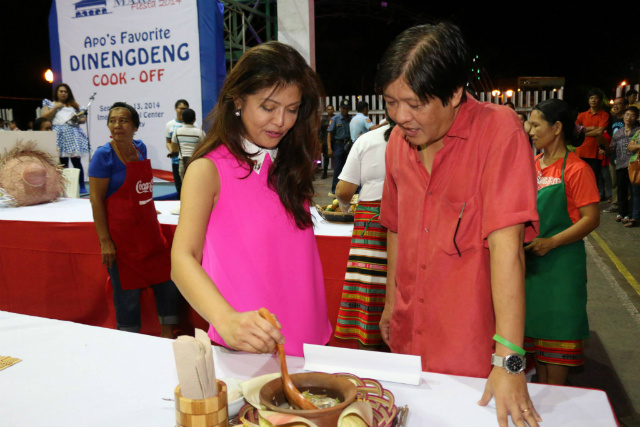 Bongbong shares common interests with his parents: he loves reading (like his father) and cooking (like his mother).

When there’s free time, he reads books. He can also cook dishes such as Filipino favorites sinigang and pinakbet, and even pan-seared steak.

He loves watching movies and even downloads them from the Internet, he said in an interview.

9. He also loves music and was once part of a band when he was studying in England. He is a huge Beatles fan.

The senator has been interested in music since he was young. While studying at Worth School in England as a teenager, he joined a band and played in local pubs. It was a short stint, since all members of the band were students who had to go back to studying for their finals.

In a recent interview, he revealed that he is a huge Beatles fan, and his favorite album is Sgt. Pepper’s Lonely Hearts Club Band – the band’s 8th album. He collects their memorabilia, and even posed for a photo with the sign of a children’s home where John Lennon grew up.

Ironically, when the band vowed never to return to Manila, it was because of an incident that involved the Marcoses. In 1966, the band played two shows at the Rizal Memorial Stadium but declined an invitation to the Malacañang because they were not informed about it.

Imelda was furious, as Ringo Starr recalled she was screaming on television. There were reports the band was manhandled at the airport before they left the country. The first lady later said she “would never dream of hurting the world’s number one band,” while his son Bongbong invited Starr to return to the country. – With research by Reynaldo Santos Jr/Rappler.com