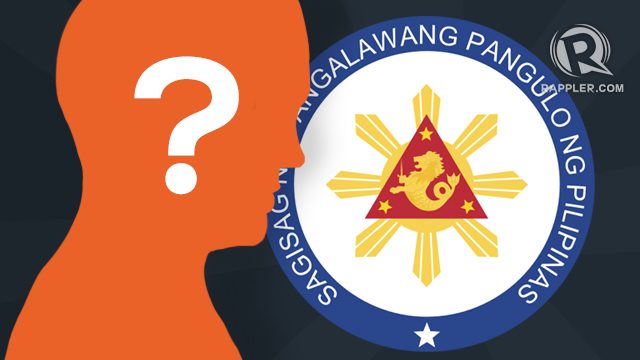 MANILA, Philippines – Before the filing of certificates of candidacy (COCs) for the 2016 elections, more politicians announced in the media their intent to run for vice president than for the country’s top post.

But as it turned out, only a few of these politicians actually filed their candidacies for vice president. There are more than a hundred people vying for the presidency, while only 19 people filed COCs for vice president with the Commission on Elections (Comelec).

Rappler looked at the information indicated in the COCs to extract demographic data about the 2016 vice presidential hopefuls.

Out of the 19 vice presidential aspirants, 6 are incumbent members of Congress:

At least 4 of them – Honasan, Escudero, Trillanes, and Cayetano – have nothing to lose if they fail to win in the elections, as they will remain senators until 2019. Marcos, meanwhile, will end his term as senator in 2016.

As for the rest of the candidates, Rappler made the following observations about their professions:

One candidate indicated that he was the president of “779 Coconut Planters Inc.” Another candidate wrote “businessman/writer” under profession, while another indicated “writer-publisher.” One did not indicate any profession.

There are only two women among the 19 vice presidential candidates: Robredo and a certain Myrna Mamon.

In an interview with Rappler, Robredo said women’s empowerment is actually part of her agenda. She will push for livelihood skills classes to help women become financially independent. (WATCH: Rappler Talk: Leni Robredo on running for VP)

Robredo was thrust into the political spotlight after the untimely death of her husband, the late interior secretary Jesse Robredo, in 2012. (READ: Leni Robredo: Low-key political wife goes national) Her running mate, Manuel “Mar” Roxas II, succeeded Jesse as interior secretary before resigning from the post to run for president.

Apart from Robredo, there are 3 other widowers among the vice presidential hopefuls.

Three vice presidential bets are single, while 12 candidates are married.

Only 10 of these hopefuls have confirmed running mates in the presidential race:

All but one vice presidential hopeful met the age requirement set by the Constitution.

Article 7, Section 2, of the 1987 Philippine Constitution says that Filipinos at least 40 years old are eligible to run for president and vice president.

Vicente Camilon Jr of Pwersa ng Masang Pilipino wrote in his COC that he was only 38 years old, making him the youngest vice presidential bets.

The eldest, meanwhile, is Nid Anima of the Aasenso Sabungero party, who is 75 years old.

The vice presidential race is expected to be Luzon-centric, based on the COC information:

Only one vice presidential aspirant is not from Luzon – Diego Palomares Jr of Lanao del Norte.

As per the 1987 Constitution, the vice president of the country does not have any specific roles assigned to him or her, other than being the successor to the president in case of the latter’s “death, permanent disability, removal from office, or resignation.”

The vice president can also be given a Cabinet position. Examples are: