Dec 27, 2015 11:30 AM PHT
Ana P. Santos
Facebook Twitter Copy URL
Copied
Aware of rampant forgery of documents and many falling prey to persistent fixers, the PSA urges the public to deal only with certified officers 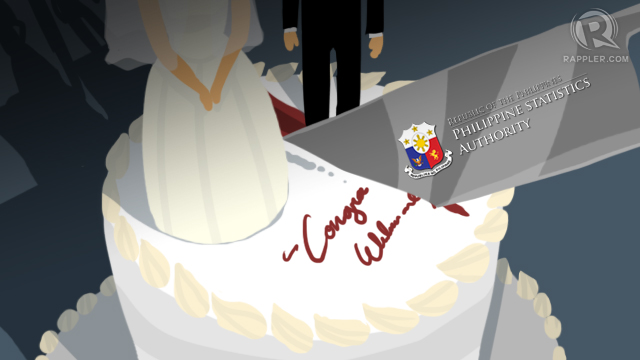 The usual process is this: once an annulment decision is issued by the court, the petitioner must submit this to the PSA to signal a change in status and an updating of the petitioner’s civil registry files. The PSA will then issue an annotated marriage certificate with details of the annulment proceedings on the right-hand side.

This annotated marriage certificate is the document that is required for most government transactions like getting a passport, applying for a fiancée visa or reverting to one’s maiden name.

But before the PSA issues an annotated marriage certificate, they first verify that the court documents are real.

In the memo, the PSA required all civil registrars to verify the authenticity of the court orders due to the “increasing number of court decisions” they have been receiving.

The memorandum was issued in August 2012, around the time when the Supreme Court issued its decisions on Judges Cader Indar and Liberty Castañeda.

Part of the memo reads:

“Fake court decisions/orders as stated are considered void and spurious which should not be entitled to the respect accorded to a valid order. A void judgment is in legal effect no judgment, by which no rights are divested, from which no rights can be obtained, which neither binds nor bonds anyone, and all acts performed pursuant to it and all claims emanating from it have no legal effect.”

The steps for a verification process are enumerated as well as the procedure for handling of a fake court decision already registered and annotated in the civil registry documents. In case of the latter, the concerned civil registrar shall advise the client to file a petition for the cancellation of the registered court decision/order in court.

The civil registrar general will automatically cancel and void the annotated civil registry document in its database.

“There are so many fake documents. There was a time when among 100 cases that we verified, only maybe 5 were correct,” said Aurelia Alido, registration officer of the PSA court decrees and legal instruments division.

Alido’s cubicle is stacked chest-high with various civil registry files. She removes a file on top and shows it to us as a sample of an annulment decree issued in a Pasig RTC that was found to be fake. Upon verification, the civil case number was assigned to another case and re-used for the annulment decision.

The PSA has identified certain provincial courts like Malolos Bulacan, Sta Cruz, Laguna, and Balesteros, Cagayan as “hot spots”  because of the large volume of cases coming from these parts.

“It’s a double burden for us and for the people,” said Alido. “There are those who come here, crying. They did not know their spouse tried to secure an annulment. Others find out they are still married.”

“We call the courts to make sure that the decision is authentic. We ensure that it has a civil case number and thus registered in court dockets and that the judge actually issued the decision,” said Alido.

“If we find the case does not exist or the judge did not sign the court decision, we do not issue an annotated marriage certificate,” she added.

Other times, the verification comes from another source. Foreign embassies verify fiancée visa applications directly with the PSA, which again checks the transaction code of the civil registry documents presented.

Aware of the rampant forgery of documents and many falling prey to persistent sweet-talking fixers, the PSA urges the public to deal only with certified PSA officers. They may also countercheck the authenticity of civil registry documents presented to them by their lawyers or fixers who offered to handle their papers by securing their own copy directly from the PSA.

A copy of an annotated marriage certificate may be requested through the 24-hour NSO or PSA Hotline, the NSO/PSA website, or at any SM Business Center located in SM malls.

The PSA also has a regular radio program, “Census Serbilis” on dzRB ng Bayan which runs every Saturday from 6:30 am to 7:30 am where civil registry officials answer common questions about legalities and the civil registry process. – Ana P. Santos and Riziel Cabreros/Rappler.com