How regions voted for Robredo, Marcos in 2016 VP race 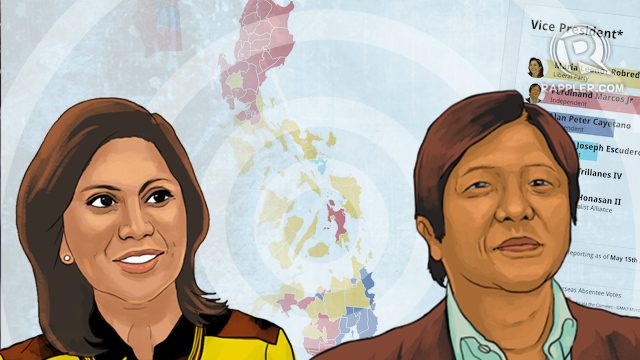 MANILA, Philippines – It’s nearly a week after the May 9 polls, but the vote count for the vice presidential election is far from being settled as both camps claimed victory.

As we await the start of the official tally of votes by Congress for the presidential and vice presidential elections, let’s look at how the regions voted. As shown in the Rappler map above, based on the partial, unofficial count, Marcos enjoys a big lead in the northern parts of Luzon, dubbed the “Solid North” – his home region Ilocos, plus the Cordillera Administrative Region (CAR) and Cagayan Valley. He also won in Central Luzon and the National Capital Region (NCR).

That yellow-shaded area in a sea of red provinces is Tarlac, the home province of President Benigno Aquino III. Robredo placed first in Tarlac, but Marcos is just around 30,000 votes behind.

Meanwhile, Robredo won in her home region, Bicol, as well as in Mimaropa. She snagged a win over Marcos in Calabarzon by nearly 110,000 votes, but province-wise, Marcos won in Cavite, Laguna, and Rizal.

All regions in the Visayas – a bailiwick of Robredo’s standard-bearer, former interior secretary Manuel “Mar” Roxas II – went to Robredo, except for one: Eastern Visayas. But Marcos has only a slim lead in that region: nearly 38,000 votes.

His win in Eastern Visayas can be attributed to the influence of his mother, former first lady now Ilocos Norte Representative Imelda Marcos, who hails from Leyte. In per-province results, Marcos won only in Leyte and neighboring Biliran, but he is putting up a fight in Samar where Robredo is currently leading by only a few thousand votes.

In Davao region, neither Marcos nor Robredo stood a chance. Senator Alan Peter Cayetano prevailed there, as he was the running-mate of now president-elect Rodrigo Duterte. Marcos was a distant second, while Robredo placed third.

All in all, Robredo won in 10 regions, while Marcos placed first in 7 regions.

Below is a graph of the regional breakdown of the VP race, based on the partial, unofficial count as of Sunday. Note that other VP bets like Cayetano and Senator Francis Escudero performed well in many regions as well.

On Sunday afternoon, Robredo’s camp claimed that based on their own computation, she would win the vice presidency. (READ: Robredo camp: Marcos win mathematically improbable)

Marcos also on Sunday declared that he had won, buoyed by information from the Comelec about the unaudited results of the overseas vote, where he placed first.

Who will emerge as the real winner? With such a tight race, we could only find out for sure at the official count of Congress, which will canvass 100% of votes for president and vice president. It is expected to start later this month. – Rappler.com