Jun 15, 2016 1:30 PM PHT
Arra B. Francia
Facebook Twitter Copy URL
Copied
While the incoming president has already made a mark for himself insofar as presidential firsts are concerned, outgoing President Aquino has set records of his own too 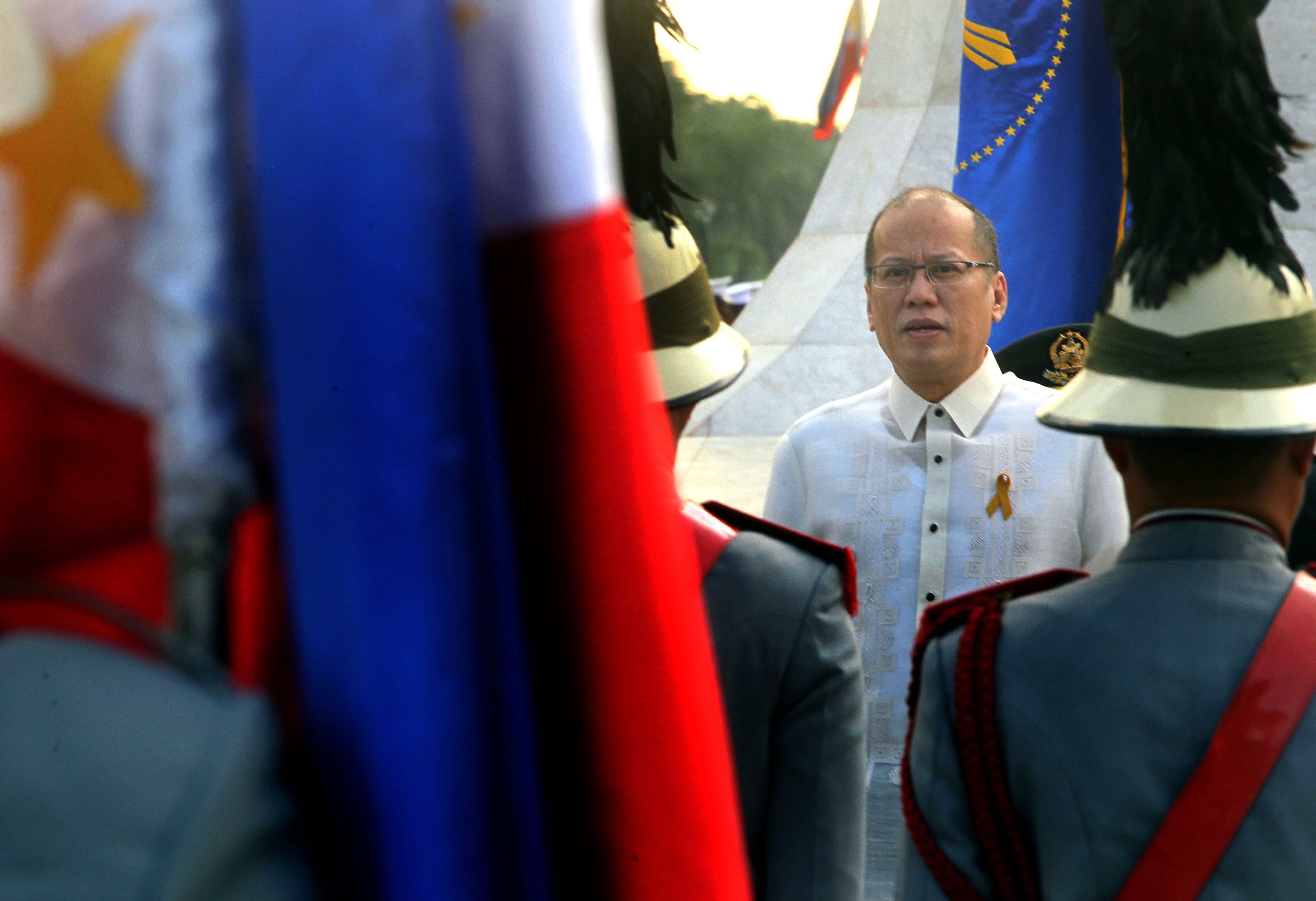 MANILA, Philippines – The end of June 2016 will mark the official start of a new administration that will be headed by the now-controversial President-elect Rodrigo Duterte.

The country is currently preparing for a transition in leadership from outgoing President Benigno Aquino III to Duterte, whose term is expected to be as colorful and controversial as his remarks before the official start of his term.

But while Duterte has already made a mark for himself insofar as presidential firsts are concerned, Aquino has set records of his own. Here are some of them:

Aquino – who was 50 when he assumed the presidency in 2010 – was without wife nor children when he took his oath as the 15th president of the Philippines. This makes him the first bachelor president of the country.

In the event that presidents don’t have a First Spouse, they can choose a family member to perform the supposed duties of their partner. Presidential sisters Kris Aquino, Ballsy Cruz, Pinky Abellada, and Viel Dee alternated in playing the role of First Lady for their brother.

Former presidents Elpidio Quirino and Corazon Aquino were also without spouses when they served their term, but both had been previously married and had children.

Aquino had been linked to different personalities during his term. Among them are celebrity stylist Liz Uy, Korean TV host Grace Lee, and former Valenzuela City councilor Shalani Soledad. Even Miss Universe 2015 Pia Wurtzbach was rumored to have dated Aquino. (READ: The bachelor president: Aquino and the women he met)

The President has often joked about his love life or the lack of it, but he still hopes to marry when he steps down from office.

2.     First president to have graduated from the Ateneo de Manila

Aquino is a Blue Eagle through and through, attending the university along Katipunan from grade school to college. He graduated in 1981 with a degree in Economics.

His professors include Gloria Macapagal Arroyo, also his predecessor.

Former president Joseph Ejercito Estrada was likewise an Ateneo student from elementary to high school until he was expelled, reportedly for unruly behavior. Aquino is set to return to his alma mater on June 25, when he delivers the commencement speech to the graduating class of 2016.

After the impeachment of Chief Justice Renato Corona, Aquino made another first by appointing Maria Lourdes Sereno to the Supreme Court (SC)’s top post on August 24, 2012. Before Sereno, the country had 23 all-male CJs dating all the way back to 1901.

Asked why the he chose Sereno, Aquino told Rappler in an exit interview on June 7: “What was the main reason? The main reason being that give her or whoever it was that was going to steer [the judiciary] enough time to effect the changes, the reforms that have always been wished for but have never been done.”

Sereno, who will serve as Chief Justice for 18 years, was an Associate Justice for two years prior her appointment.

Aquino took his presidential oath under another Associate Justice –  Conchita Carpio Morales – although tradition dictates that the oath should be administered by the chief justice.

It marked the second time that an associate justice swore a president into office. Aquino’s own mother, the late president Corazon Aquino, was sworn in by Associate Justice Claudio Teehankee in 1986 as Ferdinand Marcos also took his oath under then Chief Justice Ramon Aquino.

4.     First to finish his term with a net satisfaction rating higher than 20%

Aquino will end his term with a net satisfaction rating of +27, according to a Social Weather Stations (SWS) survey conducted in April. This is a first for a president since the research institution was established in 1965.

Aquino’s predecessor and now reelected Pampanga Representative Arroyo stepped down with a -17 net satisfaction rating, which means that more people were dissatisfied with her by the time she was leaving office.

Before Estrada resigned from office in December 2001, his net satisfaction rating was at +9, a huge dive from his initial rating of +60 in September 1998, or 3 months after he assumed the presidency.

Like Estrada, Aquino enjoyed a +60 net satisfaction rating in his first 3 months in office. He enjoyed high ratings until his numbers plunged to an all-time low of +11 in March 2015, attributed to the Mamasapano incident that took the lives of 44 Special Action Forces officers and 3 civilians.

5.      First to deliver his State of the Nation Address in Filipino

July 26, 2010, marked the first time that a president used the Filipino language for his SONA. Since 1935, all chief executives used English in addressing the public. First Philippine President Emilio Aguinaldo mainly used Spanish in his official statements.

Although then President Estrada also injected the occasional use of Filipino in his speeches, Aquino was the most consistent and did not divert from this tradition throughout his term.

Analysts lauded Aquino’s decision to use Filipino, which supposedly brought him closer to the people.

6.     First to be elected via automated elections

The presidential polls in 2010 also pioneered the automated election system in the country, which eventually put Aquino in the government’s top seat. Aquino garnered around 15 million votes. All prior elections were manually conducted, wherein voters had to write the names of officials on ballots.

The public has since elected officials by shading a circle next to the name of their chosen candidate. Ballots were then inserted into Precinct Count Optical Scanners, or PCOS machines. More than 82,000 PCOS machines that cost P7.9 billion were used.

Public officials are usually criticized for using vehicle sirens and alarms (locally known as wang-wang as an imitation of its sound) to escape traffic. Aquino aimed to resolve this by declaring a “no wang wang” policy. This policy strengthens Presidential Decree No. 93 implemented in 1973, which declares “unlawful the use or attachment of sirens, bells, horns, whistles or similar gadgets….on motor vehicles.”

In his first SONA, however, Aquino himself promised that he will set the example by not using a wang-wang no matter how bad the traffic is.

8.     Least number of appointees to the Supreme Court

Justices of the High Court are appointed by the president once vacancies open up, either by retirement, resignation, or death. The incumbent SC consists of 9 appointees of Arroyo, and only 6 appointed by Aquino. This ties Aquino with Estrada for having the least number of appointments to the SC, with only 6 out of 15 judges appointed, including CJ Sereno.

During her term, Arroyo appointed a total of 21 justices. Corazon Aquino had 23 appointments, including 4 CJs. Ramos, for his part, hand, had 14 appointments to the SC.

Aquino would have held the record alone if Associate Justice Martin Villarama did not resign at the start of the year. This prompted the President to make his final appointment of Justice Alfredo Caguioa on January 22, before the appointment ban on account of elections.

Duterte will have the power to appoint 11 justices, as majority are set to reach the retirement age of 70 within Duterte’s term from 2016 to 2022.

The president may veto a bill should he find some of its provisions questionable, provided that he gives a veto message to Congress citing reasons for doing so. Aquino killed a total of 80 bills within his 6-year term, the highest number since 1986. Ironically, Arroyo used her veto powers the least for 6 bills, despite serving the longest since the Marcos era.

Ramos vetoed a total of 51 bills, while Estrada junked 19 legislations within only 3 years in office. Meanwhile, Aquino’s mother struck down a total of 18 bills.

Most controversial among Aquino’s vetoes is his disapproval of the P2,000 hike for Social Security System pensioners (SSS). Aquino justified his veto by saying that the increase will lead to large annual deficits for SSS, which proponent Bayan Muna Representative Neri Colmenares disputed.

Other vetoed bills aimed to convert local roads to national roads, which would have cost the country millions of pesos if passed. (READ: Aquino: 80 bills rejected in 6 years)

Arra B. Francia is a Rappler intern.